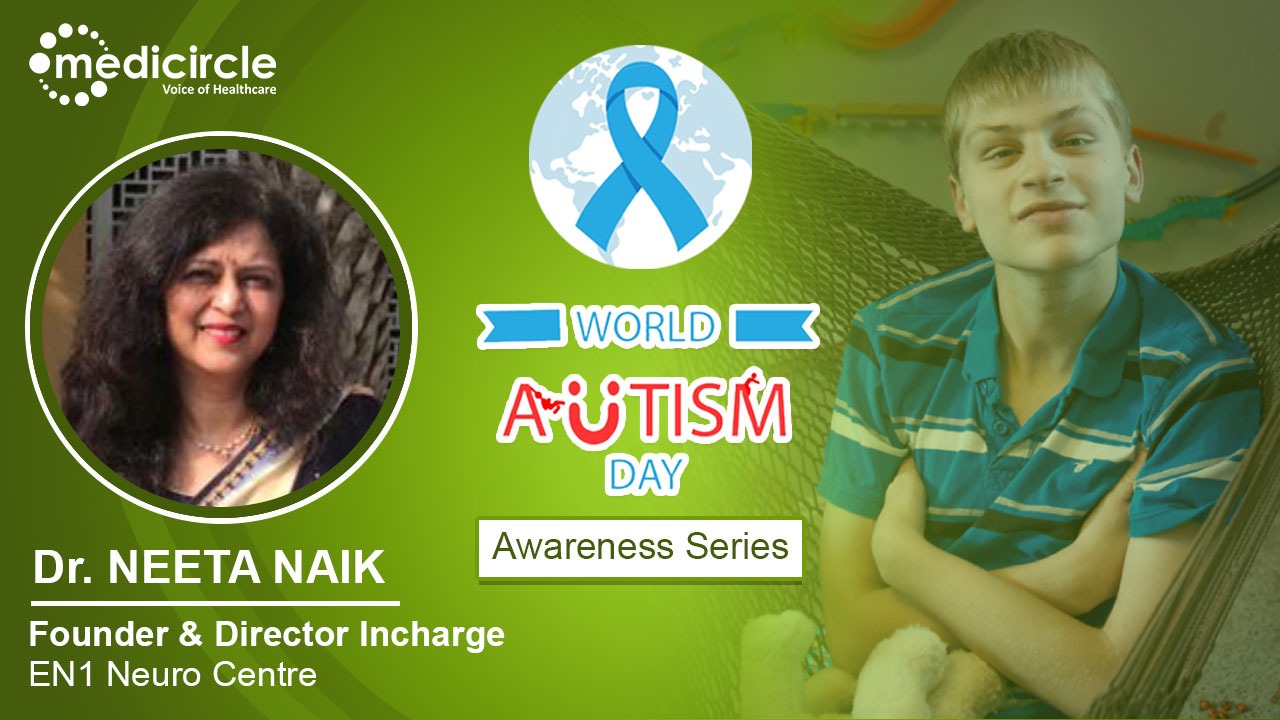 Autism or Autism Spectrum Disorder refers to a broad range of conditions characterized by challenges with social skills, repetitive behaviors, speech, and nonverbal communication. Once considered rare, the current understanding of Autism is that it is in fact one of the more common developmental disabilities. Medicircle presents the World Autism Day Awareness Series, where we are featuring eminent Pediatric neurologists, Speech therapists, and Clinical Psychologists through which we aim to build better awareness of the signs, symptoms, and realities of Autism.

Dr. Neeta Naik is the founder and director of En1 Neuro services, which offers integrated evidence based and comprehensive services to children and adolescents in the field of Neurology, Epilepsy, Neurodevelopmental disorders. She is a Consultant in Pediatric Epilepsy, Neurologic, and Neuro under developmental disorders like Autism, and has about two decades of rich experience in Pediatric Neurology.

Important features of a child with Autism

Dr. Neeta describes, “Autism is a disorder which is characterized by impairment in social awareness and communication. The age at which the child is brought by the parents is thankfully much earlier because of the better awareness of Autism amongst Paediatricians as well as to some extent amongst the parents. The incidence of Autism seems to have increased in the lockdown period, probably because of lack of social interaction with other children, lack of schooling, etc. Most important symptom or sign that we see is in attention to name calling. The child is so self absorbed, not socially connected to the family. Many times, this inattention is selective i.e he may pay attention occasionally or to some extent to the mother but not to others. Sometimes he will pay attention, which is need based means anything that interests him, like if he wants to go out with his father then he will pay attention. A child's normal alertness is significantly deficient or absent sometimes. Parents often complain about speech delays because the child is not socially aware. The brain structure of the child is such that social behavior and communication are deficient or disordered therefore nonverbal communication starts with eye contact, and later on verbal communication that is, language both are significantly delayed. So, inattention, lack of eye contact, and delay in speech are the three most important features of a child with Autism. The child may also have an absence of role play, joint attention, and sharing of emotions,” says Dr. Neeta.

Autism is a multifactorial disorder

Dr. Neeta informs, “Autism is a multifactorial disorder means there are multiple reasons for this. Autism is because of the genetic abnormality which controls the social brain network. The brain has a network that enables us to respond socially and appropriately. There are different parts of the brain that work in coordination, for ex - the frontal cortex for visualizing, temporal area for language. So, to coordinate different brain regions, we need long connections between neurons which are typically deficient in children with autism. This happens because of the genetic influence which controls the development of this particular network. Because of the child decreased stimulus, he is not able to develop a normal social response to stimuli. He is decreasing the motivation of parents to give stimulus by not responding or preferring emotional stimulus, so parents stop doing it. This way connectivity will decrease. But it has to be the other way, if the child has deficient brain network, parents have to increase the stimulation. By four or five years of age, symptoms get more pronounced of the child,” speaks Dr. Neeta.

Self destructive behavior is not common in all autistic child

Dr. Neeta adds, “Intellectual disorder is seen in 30 to 40% of children with autism. So, it's an independent cognitive disorder. If the child is younger than 5 years, we generally do social quotient (SQ) and if he is of 5 years then we can do intellectual disorder (IQ). 60 to 70% of the children don't have normal functioning.”

Dr. Neeta shares, “The society was deficient of comprehensive centers. It is very difficult to take multiple therapies, consultations and coordinate between them. A child with Autism needs a development Pediatrician, Pediatric Neurologist, Psychologist, Occupational therapist, and Speech therapist. So, you have to make things not only convenient for the parents to avail of the services but also at an affordable rate. Any neurological disorder refers to a standalone disorder with a comorbid psychological learning disorder. Autism and its treatment are multi dimensional, that is 3d dimensions in all spheres. A child will always need parent mediated intervention.”

Dr. Neeta talks, “Autism in itself is a single diagnosis but the child's developmental milestones, speech affection is going to be variable. And you have to make an individual therapy plan and individual management plan. Some child needs to test for genetics while other may require underlying epilepsy therapy or for seizures diagnosing. The job of a Neurologist is to see other comorbid disorders. The therapy plan is customized according to how’s the child presence and how much parents are willing to participate. Because if the parents are willing to participate in the therapy, then the child can improve far more rapidly. At every step, there is a difference in every child.”