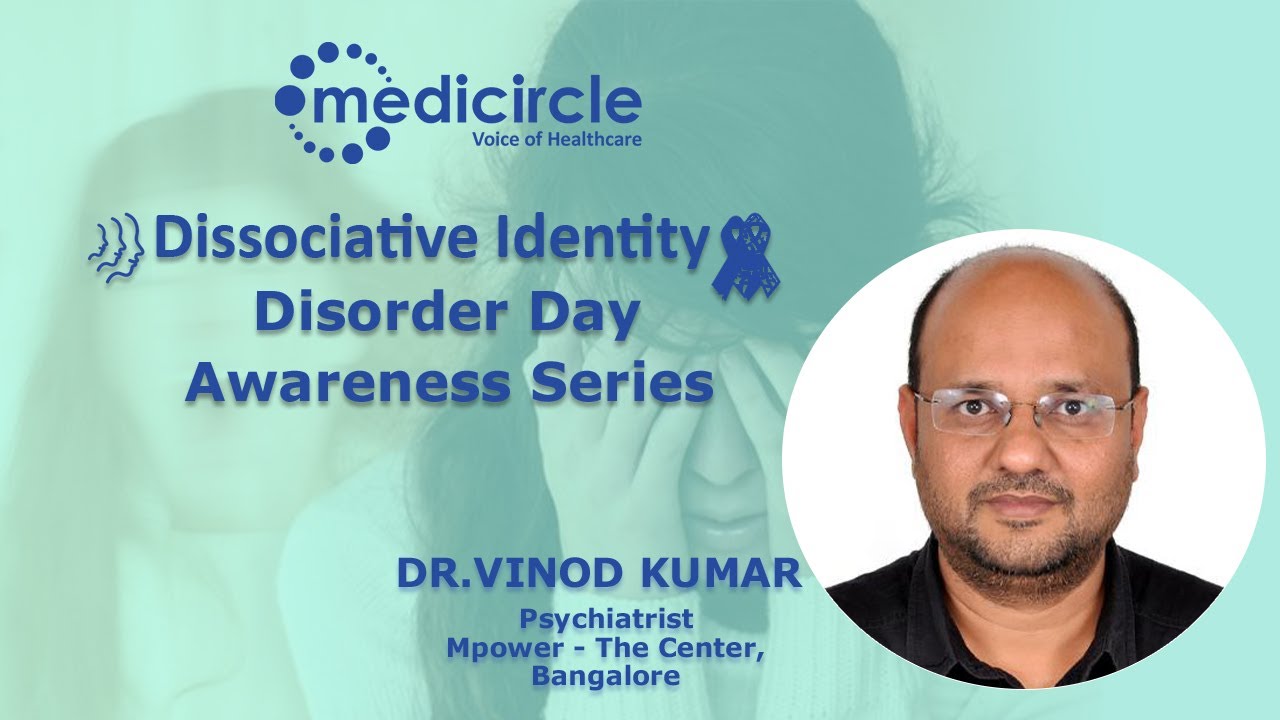 Dr. Vinod Kumar provides an overview of dissociative identity disorder and related concepts like dissociative amnesia and borderline personality disorder. He provides an insight on how different identities get formed and how strict upbringing can lead to the tendency to dissociate.

Dr. Vinod Kumar is a Certified Psychodynamic, Cognitive-behavioral, and Interpersonal Psychotherapist. He is a Certified Group Analyst. Dr. Vinod has been trained extensively in the UK and has qualifications and skills in various psychotherapeutic modalities. He trained and worked in the National Health Service (UK), from 1997 to 2011 on a substantive basis. He completed his core training and specialist training in psychiatry leading to gaining MRCPsych and a Certificate of completion of specialist training with Royal College of psychiatry endorsement in Liaison Psychiatry and Eating disorders. He has also acquired qualifications in psychodynamic psychotherapy, interpersonal psychotherapy, and cognitive-behavioral psychotherapy. Since 2011, Dr. Vinod has worked in various settings in Bangalore and has been the Head of the Centre, Mpower, Bangalore, since January 2019. He has endeavoured to develop a truly holistic approach to mental health issues and work with a particular emphasis on psychodynamic psychiatry wherein apart from the biological issues, emphasis is laid on the individual personality and the way that interacts with the illness. This approach paves the way for interventions that are appropriate for the client.

Dr. Vinod mentions, “If I refer to movies and novels, particularly American writers have been extremely fascinated by this whole phenomenon. There have been several bestselling novels as well on this disorder. I think particularly in the 90s it was quite a big theme in the west and we used to wonder, why is it so prevalent in the US only. It’s also referred to as multiple personality disorder because there can be multiple personalities in one person. Fortunately, it is a relatively rare phenomenon in which people dissociate. There is a disconnect with one's sense of self and then one takes a different form within that. Clinically we don't see it often. So, in my 25 years of clinical experience, I've seen maybe half a dozen cases of this disorder,” says Dr. Vinod.

Dr. Vinod explains, “People change, voice changes, the whole attitude of a person’s personality changes for a short period but this is kind of an extreme example. Dissociation as an experience is very uncommon. Dissociative amnesia is a related concept that has been shown in some films where the person forgets who he is and wanders away and then comes back. More commonly, what we see clinically is that an individual has undergone a severe trauma in life which leads him to experience depersonalization or derealization. Everything starts seeming unreal. Everything feels very plasticky or almost cartoony in its illustration. Derealization and depersonalization experience is more common at the peak of severe anxiety,” says Dr. Vinod.

People with borderline personality disorder are prone to dissociation

Dr. Vinod emphasizes, “On a quick note, what we refer to as borderline personality disorder is common and the person is prone to emotional instability and becomes upset, aggressive and even suicidal and tries to self-harm and after a while feels fine again and behaves normally. People with borderline personality disorder are very prone to dissociate. When they are stressed out, they can go into this sort of mode where they don't even realize what they are doing. So, they might end up doing things like breaking objects that are around, and then suddenly come back to the normal self. So, this is the way one understands the association,” says Dr. Vinod.

How different identities get formed

Dr. Vinod mentions, “If you look at the kind of literature or the scientific way of looking at the causation of it, it is a very sort of ill-understood concept in my opinion. What happens is that if a person has the tendency to dissociate and if it's not due to epilepsy or some other neurological disorder, then if we go to the history, there will be a phenomenal amount of abuse and trauma which must have been a repetitive experience of the individual.

Suppose a young girl or young boy has been repeatedly sexually abused or gone through any other repeated instance of trauma. What happens is that the young mind when exposed to overwhelming stress or trauma develops a strategy because it is very impossible to survive in that condition. So, one develops different compartments of life. The individual starts compartmentalizing oneself. So that's how different identities get formed,” explains Dr. Vinod.

Dr. Vinod explains, “A lot of young people self-harm like they cut themselves in the state of being dissociated. They will dissociate and then the only thing that will make them feel alive again and come back to reality is that physical pain. That's a very common kind of presentation. The other point is that one develops the sense of losing control and is anxious all the time. It’s a panic attack and at the height of a panic attack, one experiences depersonalization, which is again a dissociative phenomenon. Almost every day I see a person who is presenting a dissociative problem in one way or the other, in the milder level, not the extremes.

The root cause could be that there is a lot of strictness or disciplinarian parenting that has been around in the last few decades. The child is not allowed to express emotions; this is a common way of upbringing which was more prevalent earlier. So, if a person has been brought up in an environment like that, the tendency to dissociate is higher,” points out Dr. Vinod.

Dr. Vinod points out, “There is no approved treatment protocol as such but it's all kind of very clinical. You require psychotherapy or talking therapy. So basically, you have to make the person whole again. The tendency in them is to compartmentalize the emotional world. They should be experiencing painful and difficult emotions without breaking into different boxes of emotions. So, a lot of healing requires to be done. It's a very complex, long-term treatment process depending on what we're dealing with, so if you're dealing with severe abuse of emotional kind and other kinds, then obviously the management and treatment is a very long-term process. But if one has got dissociation as a part of anxiety disorder or as a part of borderline personality disorder, so, the treatment will be tailored to what that person needs. The short answer to your question is, it has to be managed based on the individual and the whole management plan has to be individually tailored, which should include appropriate and judicious use of medications and also talking therapy which is integrated,” says Dr. Vinod.

Family members are guided on how to help out

Dr. Vinod informs that family members are prepared to lend support if required. Whether it is a husband or a parent or a sibling or whoever is a big part of the person's life, is given guidance to become such people’s therapists, their healers by explaining to them about the phenomenon, why it has happened and how we can make the situation better for the person. “So, what we can term it is psychoeducation and kind of having the family members or carers, as a therapist so that they can support,” says Dr. Vinod.