Dr. Ajay Sharma stresses on parents and doctors to suspect haemophilia quickly if a child is prone to bleeding often 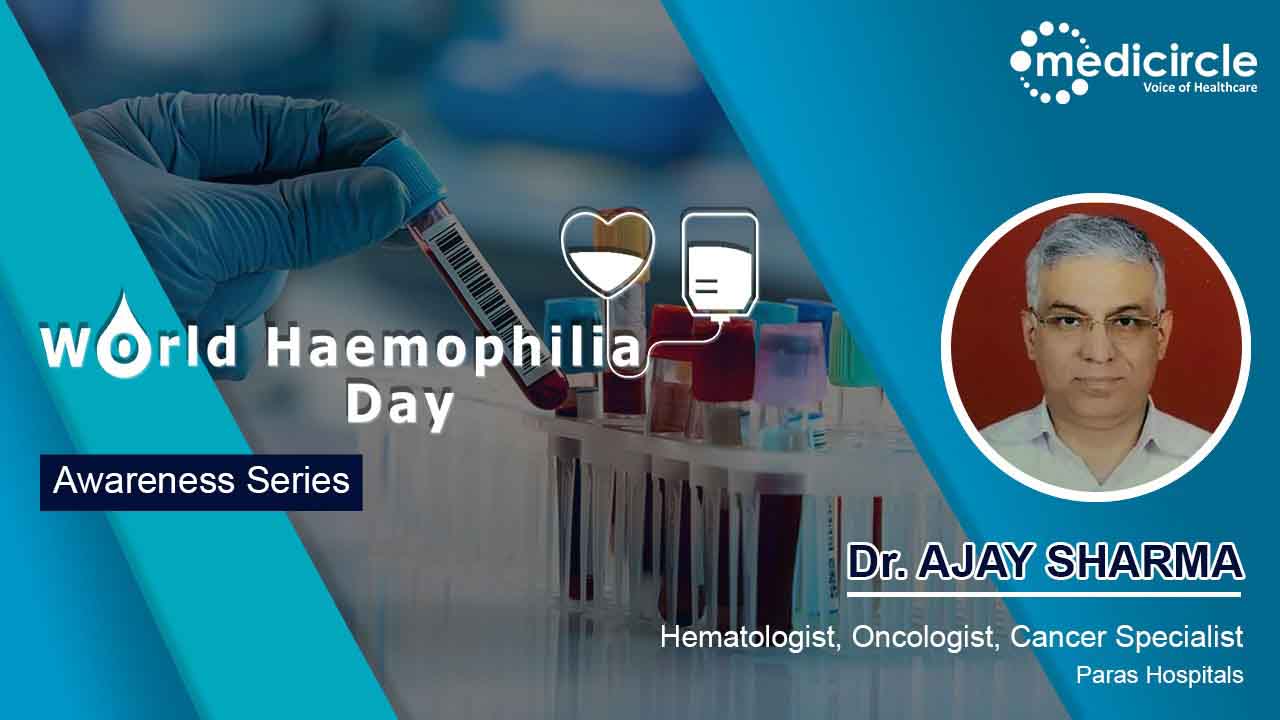 Haemophilia is an inherited bleeding disorder that impairs the body’s ability to make clots. If one is suffering from haemophilia, then he or she may bleed profusely for a longer time which calls for special attention. Medicircle is speaking to eminent doctors and hematologists to create awareness about this blood disorder.

Dr (Brig) Ajay Sharma is a Hematologist, Oncologist and Cancer Specialist. He has vast experience in Blood Cancers & other diseases of Blood. He has pioneered the Stem Cell Transplantation program in armed forces as well as in Ganga Ram Hospital at Delhi. He has performed over 1000 BMTs and has been treating all kinds of Leukemias & Lymphomas/ Myeloma, besides other blood diseases like Thalassemia and Aplastic anemia. He has been involved in various research activities and has a large number of publications in Indian & international journals. He is a recognized Postgraduate teacher & DM examiner. He has been involved in training doctors and Haematology & BMT fellows.

Dr. Sharma explains, "Haemophilia is a blood disorder which is caused by a deficiency of clotting factor in the body. As a result, the patient has a tendency to bleed and this manifests quite early in life. Mostly these patients are small children. It manifests from the age of six months to a couple of years of age and they start having bleeding from the minor injuries, depending upon the extent of the disease, which we know as the severity of the disease. The bleeding can occur spontaneously or it can occur after minor or major injuries. So, the main predominant symptom is the bleeding tendency and when this bleeding tends to occur more and more again and again, then the child develops many deformities of the joints."

Bleeding in any form is the hallmark of haemophilia

Dr. Sharma emphasizes, "The disease can come to us in the form of acute bleeding. Acute bleeding usually occurs in a joint when the child may hurt himself or even while walking or having small injuries while playing. In the child, the most common joint affected is a knee joint and when it is bleeding early, the joint is warm, it may be painful, there will be swelling, and the parents might think that the child is having some kind of infection but it is the bleeding. So, the joint could get acutely painful, inflamed, swollen, red in color which can be uncontrollable, or sometimes the bleeding occurs from the nose, mouth etc. So, bleeding in any form, which starts acutely is the hallmark of a disease like hemophilia," says he.

Haemophilia is a group of disorders in which any of the factors 8,9,7 or 11 can be deficient

Dr. Sharma points out, "When the child comes to us with bleeding problems which can occur as recurrent bleeding, first of all, we analyze the blood of the child. In the blood tests, we do the blood counts, the platelet count. We look for the clotting properties in the blood. We do what is known as a clotting test. The most common clotting tests which are done in patients with haemophilia are the coagulation tests, PT, and APTT. Haemophilia is a group of disorders when any of the factors from 8,9,7 or 11 can be deficient. So, depending upon the factor deficiency, that particular test will be abnormal. For example, in Haemophilia A, which is the most common factor eight is deficient in that situation APTT would be prolonged, but if it is a different disease, where factor seven is deficient, PT, may be prolonged. Once we have found the deficient factor, we need to quantify it to see the level of the factor, and then we do the factor assay," says Dr. Sharma.

Factor deficiency can be mild to severe

Dr. Sharma says, "In our country, because of the population, we do come across haemophilia once in a while and unless the doctors themselves are aware of it, and unless the parents are aware of it, these patients keep on going from one place to another without being diagnosed. So, it is very important to suspect these diseases when the child is prone to bleeding and get him or her tested appropriately."