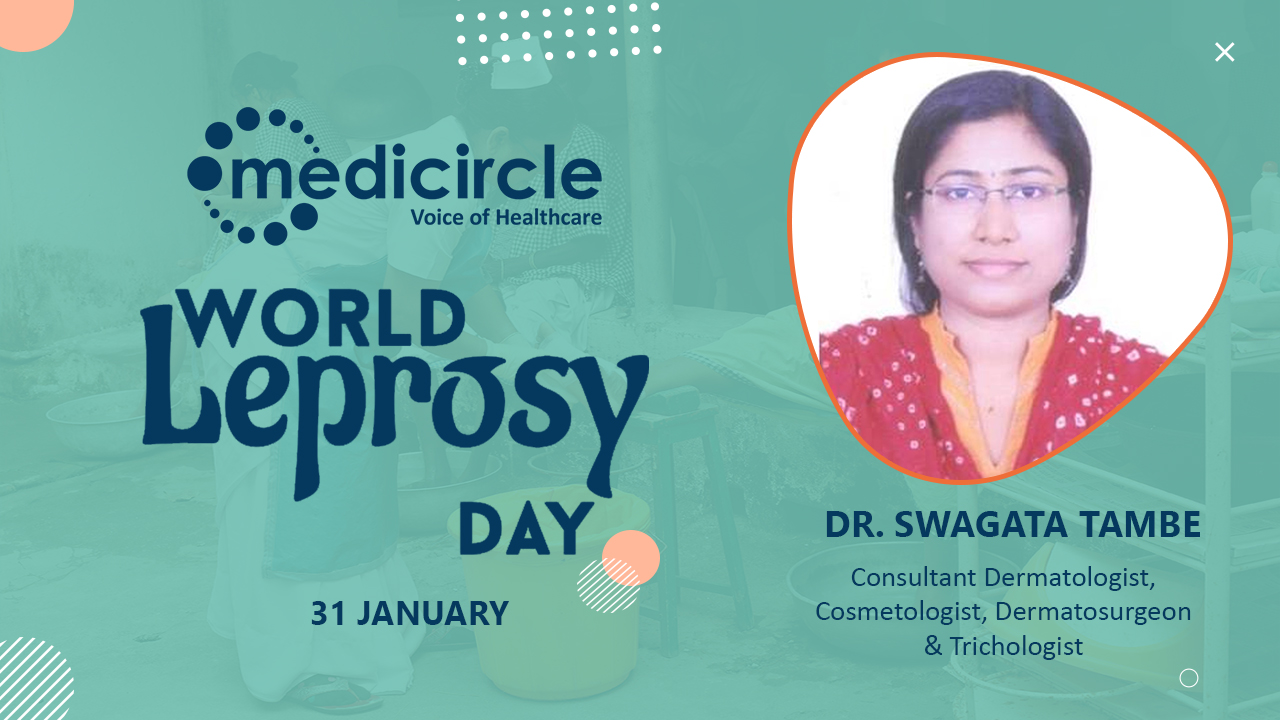 “People identified with leprosy are unable to accept it and are in denial mode. They hesitate in providing their contact and personal details which would help in tracing them.” says Dr. Swagata Tambe, Consultant Dermatologist, Cosmetologist, Dermatosurgeon and Trichologist.

Leprosy is a neglected tropical disease that still occurs in more than 120 countries with more than 2 lakh new cases reported every year. India is currently running one of the largest leprosy eradication programs in the world. Despite these 11,04,451 new cases of leprosy were reported in 2019. In India, this is 56.61% of the global total of new cases. Minicircle is conducting an exclusive series on leprosy. Through the series, we aim to create awareness about leprosy and share the views of individuals who are doing commendable work for leprosy patients.

Dr. Swagata Tambe is a renowned Dermatologist from Mumbai with international accolades. She is the recipient of the “Dermatologist Developing countries” award 2019. After completing her post-graduation, she was awarded a fellowship by "International Society of Dermatology (ISD)" in Bern, Switzerland. She has also been awarded a fellowship in contact dermatitis by the Contact & Occupational Dermatoses Forum of India (CODFI). Dr. Swagata has academic/ teaching experience of 10 years as an Assistant Professor in some Top Medical Colleges of the country. She is a reputed member of various National & International societies and also a reviewer for various indexed National and International Journals. She has more than 70 publications to her name. Dr. Swagata has also presented more than 100 papers in various State, National and International conferences. She is associated with Innovation Skin Clinic and Laser Center as a Consultant Dermatologist, Cosmetologist, Dermatosurgeon and Trichologist.

Innovation Skin Clinic and Laser Center is a reputed Skin Clinic in Mumbai which attends to patient with a wide range of Skin, Hair and Nail problems.

Ultrasonography in place of nerve biopsy for leprosy diagnosis

Dr. Tambe informs, “My thesis was on leprosy. So, during that, I have studied almost 100 patients with leprosy. We tried to identify how we can diagnose leprosy without doing nerve biopsy because nerve biopsy is a painful process. We worked on ultrasonography which is a non-invasive procedure to diagnose the nerve involvement in leprosy. It is much easier for patients this way. If we identify the nerve involvement early, we can start the treatment and we can prevent the deformities,” says Dr. Tambe.

Dr. Tambe emphasizes, “The recovery, as well as new infection rate, was rigorously brought down in 2005. There was a re-emergence of leprosy because:

1. After attaining success, we became lackadaisical. Contact tracing and taking follow-ups were not done effectively.

2. In medical institutes, it's mandatory to keep a record of the data of the patient and keep it for future follow-ups. Some patients did not want to get identified in Medical Institutes and hence they went to private practitioners where there was no system of keeping track of records and hence tracing and follow-up was not done in such cases,” says Dr. Tambe.

Eradication required in reality and not just on paper

Dr. Tambe talks about the following strategies to bring down the cases of leprosy:

“1. There should be a common database that the government is already working upon so that when doctors see the patient, even in private centers they can enter patient details, and then such patients can be followed up by calls about whether they are facing any complications, treatment is showing positive developments or not, etc.

“3. There are certain forms of leprosy that can be contagious. So, when one patient is diagnosed all the family members should be examined to find out if anybody else has been affected too. We can give the close contacts vaccine or we can give them oral medicines, which can prevent the development of leprosy in them,” explains Dr. Tambe.

Dr. Tambe advises, “If you are having any light-colored patch on your skin, if you feel there are decreased sensations or if you are experiencing numbness of the fingers, weaknesses or difficulty in moving your hands, these might be the symptoms of leprosy. Leprosy affects peripheral nerves which makes it difficult to move hands and fingers. Such people should consult a doctor. If it gets diagnosed on time whether through invasive or non-invasive methods, then there are low chances of complications later on as the problem can be easily solved in the initial phases. So educate yourself and the people around you to consult a doctor as soon as possible.”

Deformity can be removed

Dr. Tambe assures, “We are identifying patients at a very early stage. There are a lot of non - invasive procedures through which we can diagnose your nerve movement. Muscle paralysis can be prevented much faster, physiotherapy can be given and even if you develop some deformity because of late diagnosis, there are a lot of plastic surgeries / corrective surgeries which can remove any deformity.”

Dr. Tambe informs, “Multi-Drug Therapy by WHO in 1983 helped to lower the patient count. Today this therapy is given free of cost at various places. The therapy providers help one to identify deformities, provide physiotherapy, and many other beneficial and healing services. Physiotherapy is not just limited to reduction of pain in hands and legs but it can completely heal leprosy by correcting muscle or nerve paralysis.”

Good times are ahead in the sphere of Leprosy vaccine

Dr. Tambe explains, “Leprosy is a little different disease than the normal bacterial infections. Also, it has a very high incubation period. You might have got an infection 10 years ago, but you can develop the disease after 10 years. So, it has a very long incubation period, the multiplication is very slow, and therefore, the normal principles of vaccines and diseases doesn't apply to leprosy. Right now close relatives of the patient are being given the vaccine as their chances of getting affected by leprosy could be higher. There is 10 times more risk of developing leprosy if you have a close contact as a leprosy patient. The vaccine given to them is not a regular vaccine, which can be given to anyone. However, there would be a vaccine for everyone in the future without any fear of reactions to them. For this, a lot of studies are happening in India and in other countries where the prevalence rate of leprosy is high. We can hope for a bright future in this regard,” says Dr. Tambe.