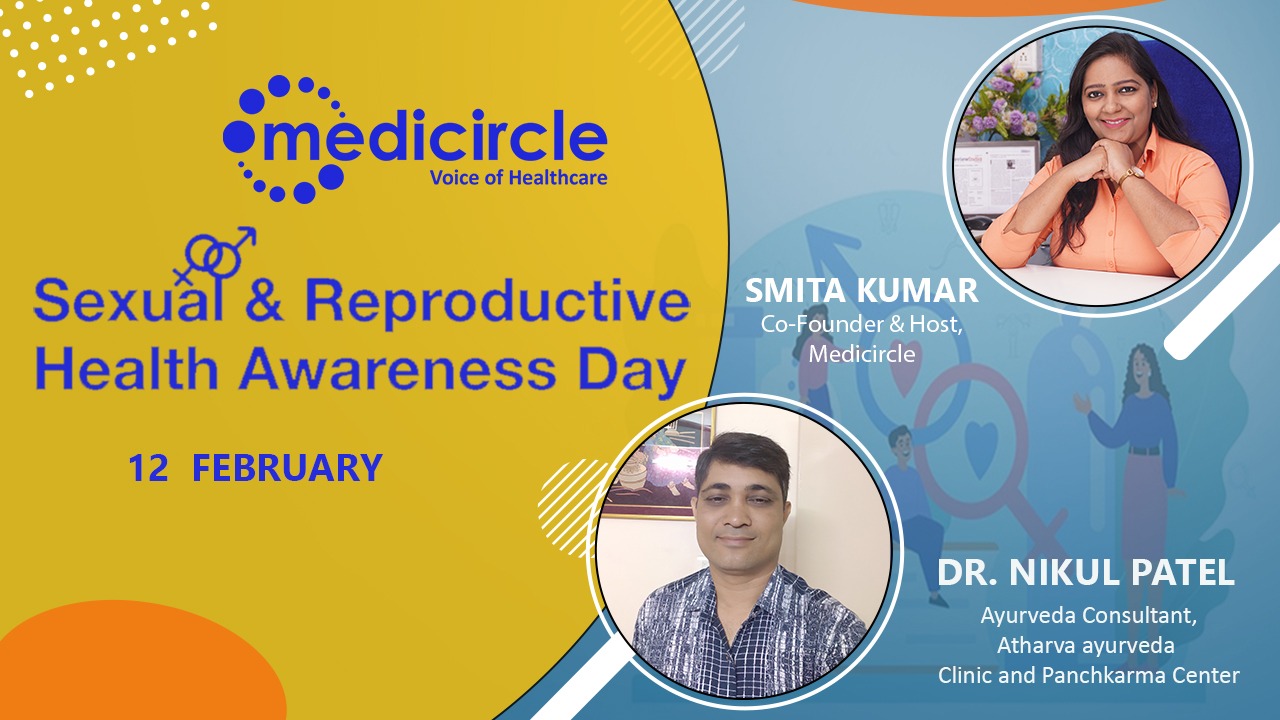 On one hand, we are spreading awareness about STDs prevention and on the other, we are building increased acceptance towards premarital and outside marriage sex leading to STDs, says Dr. Nikul Patel, Founder and Chief Ayurveda Consultant of Atharva Ayurveda Clinic and Panchakarma Center.

According to WHO, Sexual health is fundamental to the overall health and well-being of individuals, couples, and families, and the social and economic development of communities and countries. Sexual health requires a positive and respectful approach to sexuality and sexual relationships, as well as the possibility of having pleasurable and safe sexual experiences, free of coercion, discrimination, and violence. For sexual health to be attained and maintained, the sexual rights of all persons must be respected, protected, and fulfilled. Medicircle presents an exclusive series on awareness regarding Sexual and Reproductive health.

Dr. Patel mentions, “Quality of sperm and sperm count is extremely important for a couple to conceive and later on for the mental and physical health of the new-born. As per the Ayurvedic view of sexual health and fertility, the shukradhatu comprising of sexual power or overall reproductive strength of a person is negatively affected by modern lifestyles comprising of junk food. That is why reproductive health is getting affected. It is advisable to have a semen analysis report to understand the quality of it before one enters marriage,” advises Dr. Patel.

Dr. Patel emphasizes that the women are facing hormonal imbalances due to lifestyle changes, unhealthy diets, late marriages, excessive use of contraceptive pills due to pre-marital sex, stress, and mental health issues and hence their reproductive health is getting affected.

1] "Sexual health and stamina in males is not good because before marriage they have had excessive masturbations. Also, there are target-oriented jobs so the concentration on sex even when one gets back from work is low. Due to this sexual performance is low and then added to the already stressed mind is the anxiety of underperformance. Dr. Patel advises that all office-related pressures should be left back at office only. Also, the phone should not be in the bedroom so that partners can concentrate on each other as sex requires alignment of heart, mind and body which individuals are not able to achieve resulting in poor involvement with each and unsatisfactory sexual lives.

2] Both partners are busy in their respective worlds and do not have time to express mutual love and respect. Without the expression of love, sex is just for routine due to which the overall quality of the relationship suffers.

3] Seasonal foods especially the ones available in the winters are good diets for our sexual health but we hardly pay attention to these factors, neither do we have time to enjoy such food items and rather rely on fast food and quick recipes resulting in a gradual decline in sexual health," says Dr. Patel.

Dr. Patel points out that in historical times, a wide spectrum of education was provided in gurukuls. Kamasutra – the education of making love was part of it and hence it was not necessary for children to have a conversation about it with parents. This cultural practice followed generation after generation and now with the advent of the Internet, youngsters do not have to talk to parents as a plethora of information is available there. Now, they do not find the need to even discuss the issues with their friends as the information is easily available.

Dr. Patel points out there have been continuous advertisements related to the prevention of STDs still it is rampant. The causes of this could be:

"In the rural areas, people see the hoardings related to STDs but are hardly able to process the information. People are getting married late in life. Since they are single when their sexual hormones are most active, they have multiple sexual partners to satisfy their urges leading to STDs. Despite being told multiple times, people do not like using condoms in order to have increased pleasure Some youngsters who develop STDs do not have enough money for their treatment as they are yet to establish themselves in life and they do not tell their parents about their ailment because of fear.  Modern media indirectly promotes extra-marital affairs through its modern stories leading to rampant extra-marital sex and resultant STDs," says Dr. Patel.

Crux of the Matter

Dr. Patel mentions, "Though we are spreading awareness at different levels to prevent STD, we are allowing the western cultural impact on our own culture leading to premarital and extramarital sex. Educators and health workers need to play a much greater role.  Society as a whole should be whistleblowers and put pressures on people to not make sex before marriage or outside marriage acceptable and if people still want it then condoms should be a must. If there is no self-control or self-precaution then others cannot help an individual."