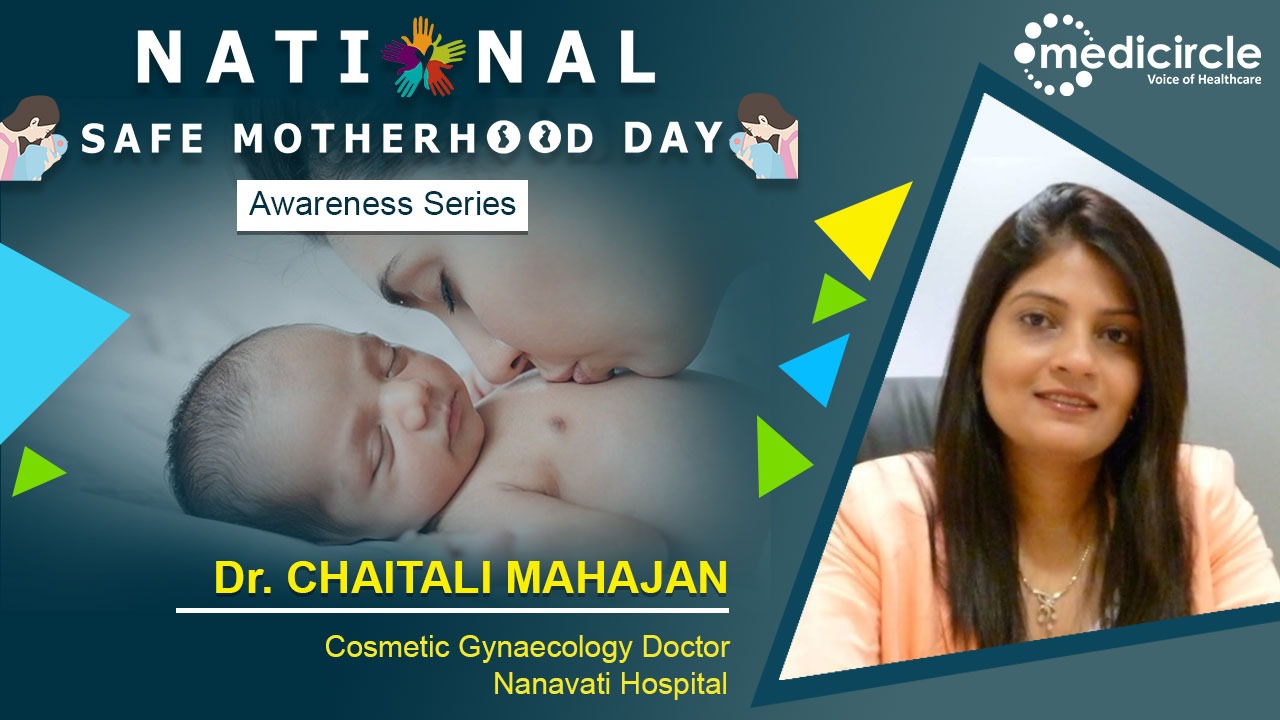 “Cosmetic gynaecology is incharge of beautification of the genital area. Cosmetic surgery not only helps in physical enhancement but also enhances mentally and gives a sense of rejuvenation post-pregnancy,” Dr. Chaitali Mahajan Trivedi, Laparoscopic and Cosmetic Gynaecology Surgeon

Becoming a mother is one of the most phenomenal events in a woman's life. Nothing gives her more joy than holding a baby in her arms. But for some women, it is a challenging time to become a mother during the ongoing outbreak of coronavirus pandemic. Fear, anxiety, and feeling of uncertainty have gripped them during this otherwise happy time. And yet, they have handled the situation gracefully. We at Medicircle presents National Safe Motherhood Day Awareness Series where we are featuring successful Mompreneurs, Health Professionals, Obstetricians, and Gynaecologists, Entrepreneurs working on Safe Motherhood to raise awareness about adequate access to care during pregnancy, childbirth, and postnatal services.

Dr. Chaitali Mahajan Trivedi is the Laparoscopic and Cosmetic Gynaecology Surgeon in Mumbai. In laparoscopy, she holds the Guinness World Record for removing the largest uterus laparoscopically. In Cosmetology, she deals with Labial correction, Hymenoplasty, skin lightening, Clitoral correction. Currently, she is associated with Nanavati Super Speciality Hospital in Mumbai.

Laparoscopy is the best option for fibroids

Dr. Chaitali speaks, “30% of women do suffer from fibroids in their lifetime. And fibroids are usually seen at a later stage. But it is not uncommon to see it in young girls also. Depending on the location of fibroids, pregnancies can be affected. If you have a fibroid lying inside of the uterus, it will affect the implantation of the egg. So, the patient cannot get pregnant. Then, if a fibroid is lying on the outside, it may not affect the pregnancy but sometimes patients do face problems of infertility. In such cases, the preferred option is the removal of the fibroids surgically. For this laparoscopy is the best option because it causes very minimal adhesions and damage to the tissue. If a patient gets pregnant with fibroids, it's a high-risk pregnancy and we have to be very careful because they are more prone to abortions, preterm deliveries, preterm labor. Even after delivery, they are more prone to bleeding or postpartum hemorrhage (PPH) problems. Fibroids usually increase in size during pregnancy, but then they do subside or come back to their normal size around three months after pregnancy,” says Dr. Chaitali.

Endometriosis can neither be diagnosed by CT scan nor sonography

Dr. Chaitali mentions, “Endometriosis has been on the rise because of the change in lifestyle seen in younger women. It has also started being diagnosed at a very early stage because laparoscopy has increased. We cannot diagnose it either by CT scan or by sonography. It is usually diagnosed as an intraoperative finding or depending on the symptoms like the patient will have severe pain with excessive bleeding during her periods and pain during intercourse. So, these are a few symptoms that the patients come to us with. And of course, she is unable to conceive because of that. Endometriosis is basically caused because the inner lining that is the endometrium is lying outside the uterine cavity. It is lying on the surface of the ovaries or on the bowel or anywhere inside the abdomen that bleeds during the periods and this bleeding causes severe pain to the patient and is also responsible for other organs to stick on to each other. Now, this causes the change in the position of the uterus and that prevents pregnancy. It is treated by injections or medicines or otherwise, surgery is another option for these patients,” talks Dr. Chaitali.

Dr. Chaitali informs, “When patients have a surgical problem which cannot be treated by medicines, then the most opted treatment is hysteroscopy and laparoscopy. Hysteroscopy basically means that we go through the normal birth passage and view inside the uterus. We can see if there's a problem with the inside lining, or there's a fibroid or a polyp inside or the tube opening may be blocked. So, all these are diagnosed as well as treated at the same setting.”

Dr. Chaitali stresses, “Patients are also advised laparoscopy when they have fertility problems. In laparoscopy, we do small cuts on the abdomen, which are around five millimeters in size. There are two to three cuts on the abdomen. And through this, we look at the surrounding structure outside of the uterus, the ovaries, and the bowel. So sometimes the uterus may have a fibroid which can be removed laparoscopically. Or there may be cysts inside the ovary which is preventing ovulation. Sometimes the tubes may be blocked, or the patient has already had a family planning operation and now she wants to open up that surgery. Or there may be a septum inside the uterus. So, these are various problems, which can be diagnosed, and are treated by laparoscopy or hysteroscopy.”

Dr. Chaitali expresses, “Cosmetic gynaecology is a new field which has come up lately, it is quite rampant in Europe and America, but in India, it has come just a couple of years back. Cosmetic gynaecology is in charge of beautification of the genital area or the private area of the lady. So, this can be either done at a younger age, before pregnancy, or after pregnancy also. Now, when a patient goes under a normal delivery, there is a lot of wear and tear of tissue in the vagina and the vulva. So, the patient gets scars in that area, sometimes doctors give a cut in the lower area for the baby to come out. And the patient is left with a very bad scar or miss approximation of the tissues or loosening of the tissue. So, all this can be recorrected and brought back to his pre-pregnancy state by cosmetic surgery. Loose perineum can be tightened up which will help the patient in her sexual intercourse also. Secondly, if there is labial hypertrophy that is the inner lip of the vulva is enlarged in size and darkened during pregnancy, can also be trimmed and given a nicer and better look. As we say that the charm goes away after delivery or after the first baby, cosmetic surgery helps not only in physical enhancement but also enhances mentally and gives her a rejuvenation,” adds Dr. Chaitali.