Treat Doctors as Friends and Have an Open Chat with Them says Dr. Shailaja Sabnis, Consultant Physician and Rheumatologist 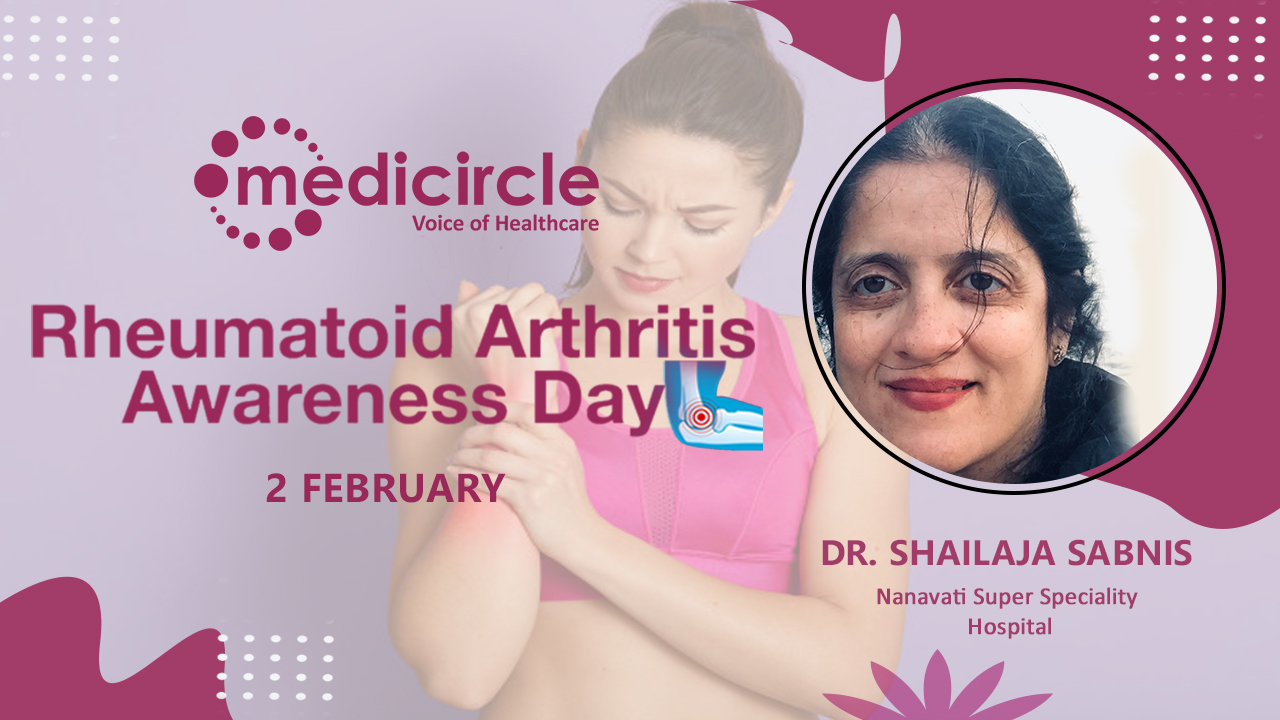 Dr. Shailaja Sabnis, Consultant Physician and Rheumatologist gives a brief overview about Rheumatoid Arthritis with special advice to the female patients and financially weaker segments on why neglecting RA is going to lead to complications in future.

Rheumatoid arthritis (RA) is estimated to affect approximately 0.24 to 1 percent of the Indian population and is more common in women compared to men. It affects more than 180 million people in India; the prevalence is higher than many well-known diseases such as diabetes, AIDS, and cancer. Around 14% of the Indian population seeks a doctor's help every year for this joint disease. In the series on rheumatoid arthritis, the team of Medicircle is speaking to many eminent rheumatologists so that there is awareness about all aspects of this disease amongst people.

Dr. Sabnis, advises that if one is suffering from joint pain, swelling in the joints, early morning stiffness which only gets reduced after a person does some exercises or activities, then it is surely a case of Rheumatoid Arthritis. There can be fever accompanied by these symptoms as well sometimes. If all these symptoms are regular and if the early morning stiffness persists for more than 30 mins every day, it’s an alarm for the patient to immediately visit a doctor because delay means being prone to deformities.

Women Should Not Ignore Their Condition

Dr. Sabnis emphasizes, “Since women are not breadwinners of the family, they neglect their health a lot. They should never take the symptoms lightly and visit the doctor immediately because their health matters as much as the entire family’s health and ignoring one’s ailment is going to create big complications later on. Since research indicate that RA is 7 times more in women compared to men, females should be very particular about identifying their symptoms and quickly reporting to doctors. Another set of advice for women is that if they are planning pregnancies then they should immediately let the doctor know so that they can tailormade the treatment plan which includes a change in medicine accordingly so that there are no complications in pregnancies,” advises Dr. Sabnis.

Not Just Adults but Children Suffer from RA too

Dr. Sabnis points out that it is a common belief that adults in the age group of 40-50 years start experiencing the symptoms. However, some of her patients are very young, between 6 to 20 years in age and complain of the disease being so severe in the mornings that they are unable to attend their school or college or even miss out on exams. It’s not that primarily there are hereditary reasons due to which youngsters suffer from RA. There are just 15-20% of hereditary cases.

RA is treatable with early treatments and frequent consultations

Dr. Sabnis points out that if a patient has visited the doctor within 6 to 12 months, then he/she can expect remission. However, if it’s a chronic condition like if a person has visited after 2 to 5years after the symptoms started appearing, then treatment takes time and medication needs to be taken for a longer duration of time. Dr. Sabnis points out there are seasonal variations in the disease like the condition aggravates with the change of season and during monsoon. Medications have to be in variant as well. So, Doctor’s consultation once every three months is recommended.

Dr. Sabnis assures, “earlier there was lesser availability of Rheumatologists but the numbers are increasing compared to what it was two-three decades ago especially in metropolitans like Mumbai. Do not get into frustration or depression when you are diagnosed with the disease because it is treatable with adequate and aggressive treatment.”

She says that people have come to her in wheelchairs also but later on with treatment could walk back again. There are some patients who were not able to even move a mouse of the computer in the mornings, or doctors suffering from RA could not schedule operations in the mornings and use to keep afternoon or evening slots. They come back with a smile saying that now they can work normally. “Their smiles feel so satisfying,” says Dr. Sabnis.

Exercise along with Medication

Dr. Sabnis recommends that just medication is not sufficient. Exercise is sufficient too. Visiting physiotherapists is extremely important because they chart out a plan of action for early improvement. Apart from that, one should try to maintain weight as well because a healthy weight is important to stay away from conditions like heart attacks, etc. RA patients fall prey to such conditions due to decreased movements. Dr. Sabnis informs that now the rheumatologists have started checking the overall health of the patient like lipid profile, condition of the liver, kidney, etc. to help patients with an overall treatment plan. They take into consideration, individual history of the patient to come up with tailormade prescriptions.

There is no fixed Diet

Dr. Sabnis points out that there is no fixed diet as such that one should avoid eating. People should eat home-cooked food because it is healthy, colored vegetables and fruits as they have antioxidants, fish if one is nonvegetarian as the fish oil is good for such patients to an extent.

Dr. Sabnis advises, “Treat doctors as your friends. Tell them every concern so that they can chart out a prescription accordingly. Some people hesitate in saying that they would not be able to continue with the treatment because of the costs involved and rather depend on cost-effective steroids instead of purchasing the medications. If there are financial issues, then tell your doctor so that he/she can do the best that can be done in prescription of medicines instead of coming for consultation and not taking medicines at all due to lack of money. Not all drugs are costly so it is essentially a bilateral approach both from the patient and the doctor. Also, steroids might be very cheap but are going to create long-term damages, hence being dependent on them is not advisable. Have open chat with the doctor about the budget and what medications you had been taking so far. If there is any kind of infection then the RA patients should consult doctors because infection might aggravate the condition,” says Dr. Sabnis.