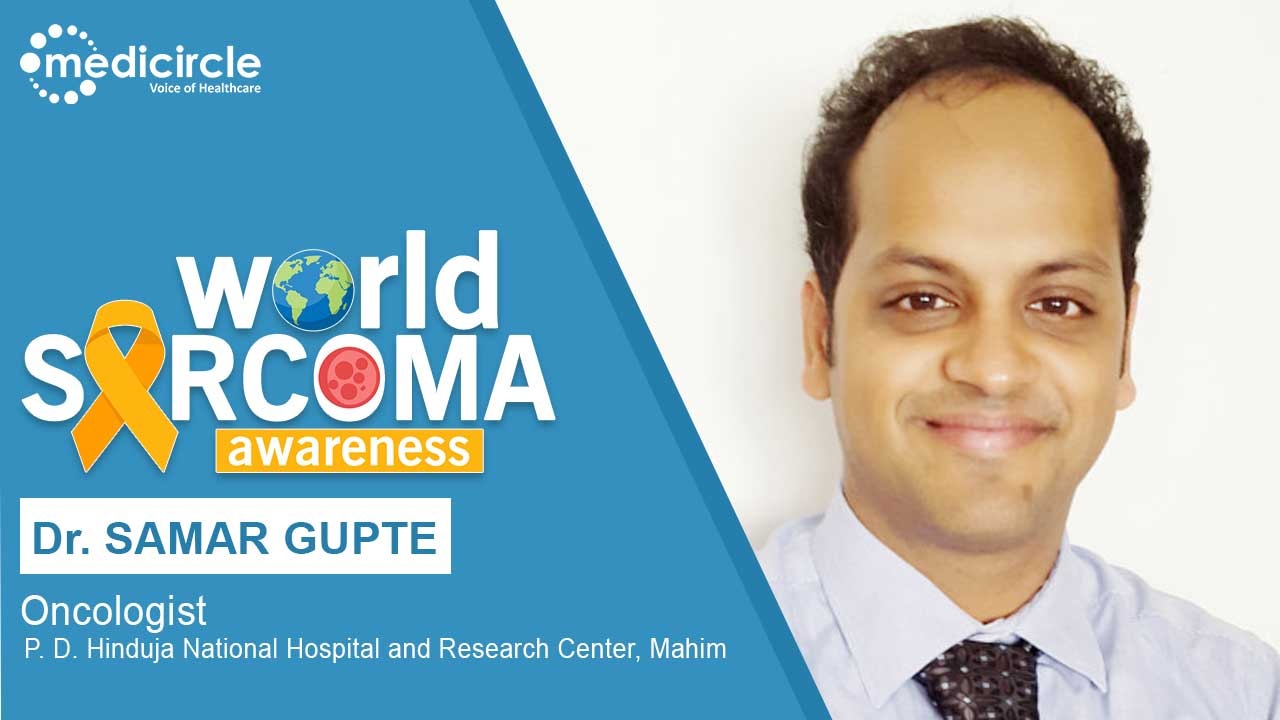 Dr. Samar Gupte sheds light on uterine sarcoma in elderly-aged group females and gives signs and symptoms for early detection of cancers. He also advises the cancer patient not to lose hope in cancer treatment. His valuable expertise gives a new ray of hope to all cancer patients.

Sarcoma is the general term for a broad group of cancers that begin in the bones and in the soft tissues. Bone sarcomas are rare tumors, approximating 0.2% of all cancers. The common subtypes identified in India include Ewing sarcoma and synovial sarcoma. Soft tissue sarcoma forms in the tissues that connect, support, and surround other body structures. This includes muscle, fat, blood vessels, nerves, tendons, and the lining of the joints. It has an average 2.1% frequency rate in males and 1.2% in females. Treatment for sarcoma varies depending on sarcoma type, location, and other factors. As Sarcoma Awareness Day is observed every year in the month of  July, we, at Medicircle, are conducting an exclusive series to raise awareness about this rare medical condition.

Dr. Samar Gupte is Gynecology Onco-surgeon and is trained in the UK for 2 years. Over the years, he has been invited as a speaker and organizer for a large number of national and international conferences and in the CMEs for gynecology cancer. Recently, he has been recognized by the Cambodian University for gestational trophoblastic tumors. He has articles published and featured in large international magazines. He is in charge of the Women’s Lions Club at Khar Danda Mumbai. He is also on board and part of the National Commission for Women’s Welfare

Sarcoma is a rare and dangerous disease

Dr. Samar Gupte says, “ Our body consists of solid organs and liquid organs like blood. Similarly, cancers are divided into the -

The organs and cells in our body are joined together with connective tissue. Cancer arising from this connective tissue is called sarcoma. Sarcoma is a rare and dangerous form of cancer that is difficult to treat with chemotherapy and radiation."

Dr. Samar Gupte informs, “Sarcoma is present in women in their uterus which is also called uterine sarcomas. Usually, this cancer is detectable at the late stage of 50 + age groups. Women at this stage have already entered the menopause stage and have no bleeding or menses."

Symptoms of the uterine sarcoma

Dr. Samar Gupte states, “These symptoms must be checked in women above the age group of 50 + which are-

This calls for immediate attention and should not be neglected. Detection of sarcoma at an early stage is a must to avoid the spreading of cancer."

Dr. Samar Gupte informs,” Early diagnosis is a must for sarcoma. When sarcoma is detected at an early stage, it can be cured with surgery, chemotherapy, or radiation. Treatment depends on -

Advice from an expert on sarcoma