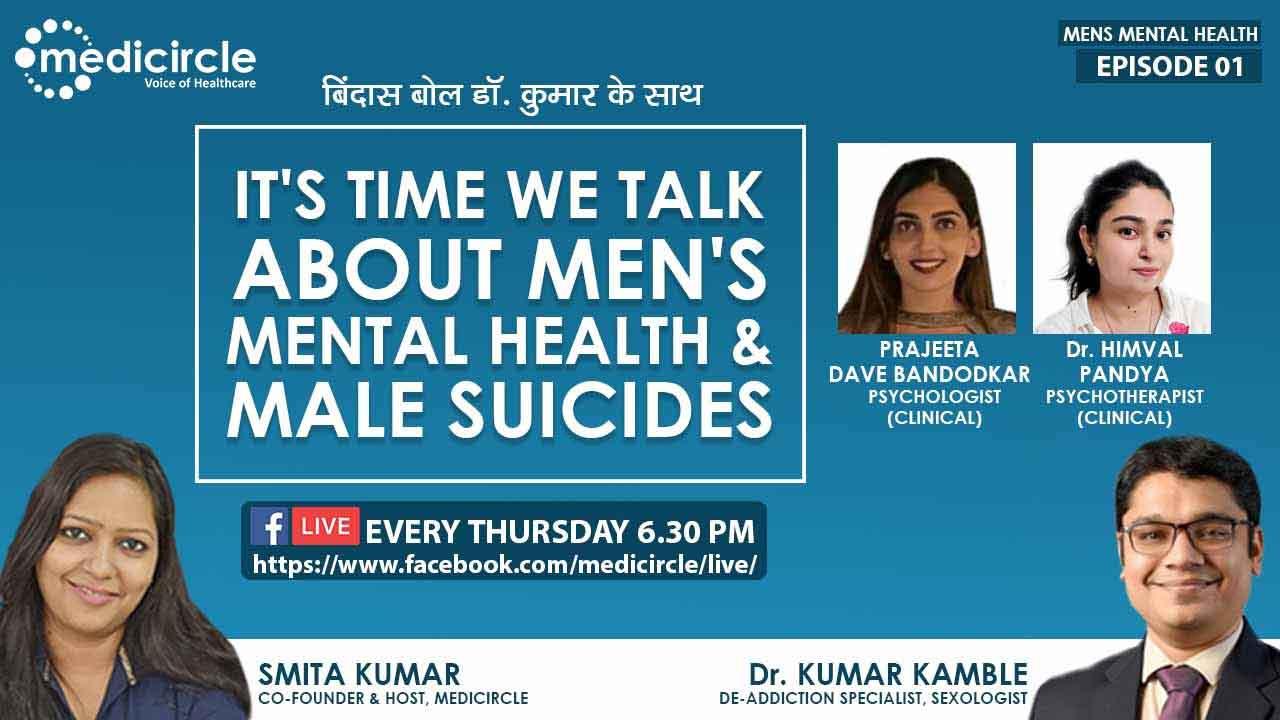 “The upbringing of a male child and the judgemental approach of our society for men are creating a negative impact on men’s mental health which leads them to suicidal tendencies. To bring change in social reforms, we have to start the change from our homes”

NCRB report reveals that family issues, love affairs, drug abuse, mental illness appear as the top cause of suicide among the youth. According to the report, among people aged above 18 and below 45, family problems were the biggest reported cause of suicide. Of the total 1.39 lakh suicides recorded in the year 2019, roughly 93,016 or 67 percent were committed by youngsters (aged 18+ and below 45). Of these, 31,725 (34 percent) suicides happened because of family problems, marriage related issues drove 7,293 (7.3 percent) people to suicide. Mental illness was a cause of suicide for 6,491 people or 7 percent of the total suicide committed by youngsters. Drug abuse/alcoholic addiction drove 5,257 (5.6 percent) to die by suicide and love affairs drove 4,919 (5.2 percent) people to kill themselves. More importantly, the incidence of suicide due to family problems and mental illness is quite high in males.

Joining the panel are:

Dr.Kumar Kamble is an expert Psychiatrist, De-addiction Specialist, Sexologist, Speaker, Mental and Sexual Health Educator. He is also associated with the Umang Clinic. He has worked with King Edward Memorial Hospital in the Deaddiction center for 4 years as a Medical Office Coordinator.

Incidents of suicide are quite high in males

Prajeeta voices, “You are a boy, you can’t express your pain, you can’t cry in front of others. This is the way boys are raised in our society. The repression of emotions thought, feelings are practiced since childhood in boys. So, as the individual grows up, he is unable to express his feelings or thoughts even during tough situations. They are taught not to open up or share their feelings with anyone. This upbringing is being carried from one generation to other. All this repression leads to the tendency of suicide in men."

Dr. Kumar states, “In males, the suicide completion rate is higher as compared to females. Even females try different attempts to suicide but the fatal method for suicide is prominently used by males, that's why the cases of suicide are higher in males. They are taught not to be weakened since childhood. They can't communicate their problems, feelings. If they do, they are labeled as vulnerable which they shouldn't be. A man cannot be vulnerable, he is the chariot rider. All these norms of society directly or indirectly force him to take this extreme step of suicide."

Dr. Himval expresses, “Women can easily communicate and express their feelings because society teaches them that a woman can feel emotions and express sorrow, anxiety, and grieving. They have full freedom to do so. Unlike women, men don't have the right to do all this. When you communicate your vulnerable emotions to any other person, you feel ventilated. At the same time, this builds the support system that will be always there for you in your thick and thins. Men are devoid of both these things due to social norms. There is a core belief behind every suicidal attempt: hopelessness and helplessness. When you can't communicate your problems, you feel hopeless and that is why they are more vulnerable to such attempts."

Why the suicidal rates are higher in the age bracket of 18-45 years males?

Prajeeta speaks, “Career issues and work stress is the main reason behind the suicide of young boys. Love affairs can also be a reason, that diverts them from their education, career, and family love. After attaining a certain age 35-40, financial losses, business losses, loans become the reason for this tendency. One way of escapism gets into them which leads them to suicide."

Talking about the Baba ka Dhaba suicide case, Dr. Kumar talks, "There were three prime reasons for his suicide – he was on treatment for some mental health issues, recently he had a big financial loss too and old age. All these were the factors that took him to take that step.”

Dr. Himval informs, “According to WHO, there are three major stressors in the whole lifespan of men - family, job, and finances. In this age group of 18-45, all these stressors play a major role in different stages. The judgemental approach of our society towards men creates a very negative impact on men's mental health. Mental health issues like depression, anxiety, and psychological problems push them to suicidal tendency."

Know the warning signs or risk factors of suicides

Prajeeta says, “Any man before he commits suicide, shows some warning signs like undesired to live, staying alone, not attending any social gatherings. The most prominent sign is self-harming that gradually leads to suicidal tendencies. So, if anyone comes to know that their near and dear ones are going through this, please encourage them to see a therapist or any psychologist for better consultations."

Dr. Kumar adds, “Other warning signs are increase consumption of alcohol or any drug abuse, irregularity in their work. With every passing day, they try to harm themselves, for example - patient on BP medications will slowly start skipping medicine because he doesn’t have the desire to live. They will start meeting all their friends and family thinking of meeting for the last time before he dies. All these are the indicators that are eyeopener for us.”

Dr. Himval expresses, "As per my own experience, there is a frequent mood swing among these people, eating and sleeping pattern is fully disturbed, a permanent goodbye is seen in their talks, their conversation with others is always about death. If someone around you is showing all these symptoms, then you can ask them if they are having suicidal tendencies, by asking this you will not induce tendencies of suicide instead communication will lend a helping hand that helps to fill up the gap."

Dr. Himval emphasizes, “Worldwide men are burdened with such patriarchy, the men in the family are responsible for economic and financial responsibilities. Nature has allowed feeling emotions by anyone irrespective of gender, it’s the society that has created differences in the norms of men and women.”

Prajeeta advises, “We all are human beings, we are bound to have emotions. We cannot differentiate emotions between males and females. The upbringing should be in such a way that even men can express their emotions, can cry, can have vulnerable feelings and not repressing it.”

Dr. Kumar says, "Even men have emotions and get hurt too. Let them express themselves the way they want. Suicide is a mental health emergency, if anyone feels that he has the symptoms of suicidal tendency, then please rush to the mental health professionals at the earliest."

Men’s suicide cases are rising. One of the main reasons for this is the upbringing of the male child and social reforms. The judgemental approach of our society is creating a negative impact on men’s mental health which leads to suicidal tendencies. To bring change in society, we have to start the change from our home. We should teach our boys that you too can cry, express your sorrow. If you are seeing any of these warning signs in any person, extend a helping hand towards him.