Dial4242-In a mission to save lives across the nation 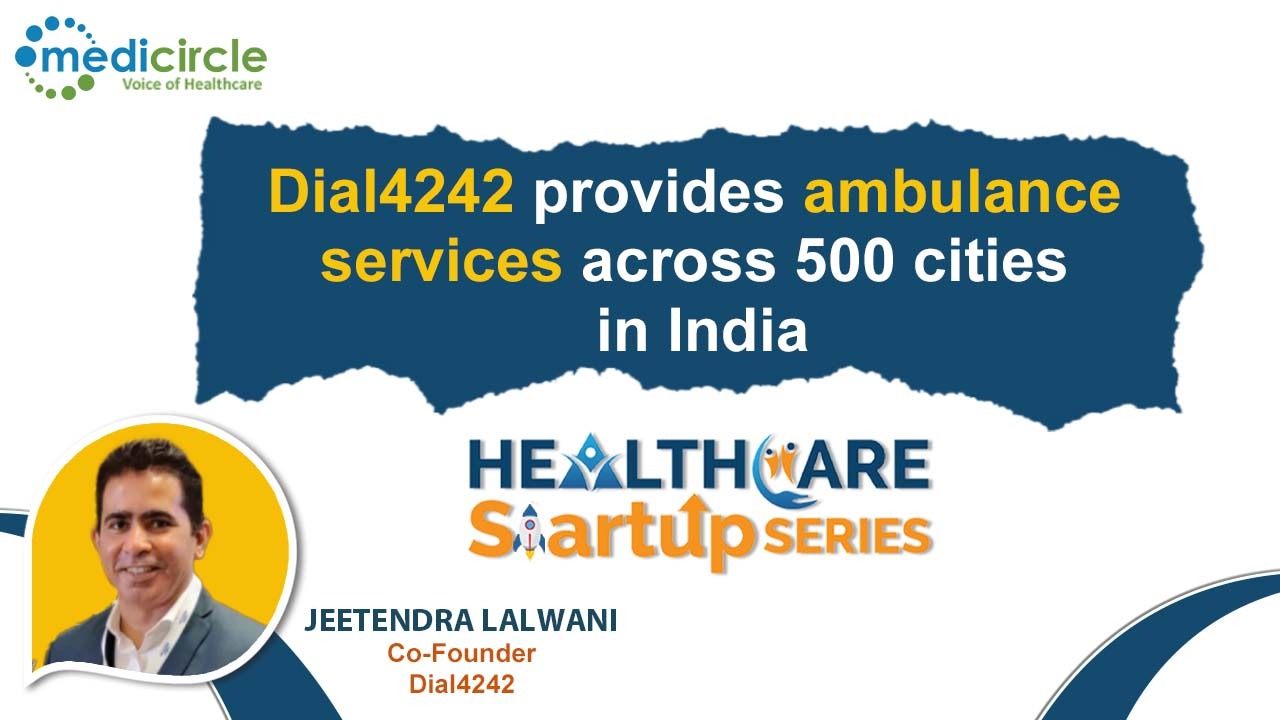 I couldn't save my dad's life due to the ambulance delay, which triggered me to start DIAL4242, an app-based ambulance network. Every blood given and every life saved is important to us.

Dial4242-In a mission to save lives across the nation

Jeetendra Lalwani is the Co-Founder of Dial4242. Dial4242 is an app-based ambulance network that provides emergency services across the country. The mobile app connects users to emergency facilities by providing timely ambulance service when required.  The company has a fleet of 10,000+ ambulances and operates in 500 cities in India on a contractual basis.

More about the start-up DIAL4242

Jeetendra Lalwani says "We have gone through many ups and downs, and we have stood by because there is a reason behind it. So many people start something because there's a lot of money in getting into that venture or there are some other ulterior motives. For me, it was not about any other ulterior motives. It was more about a personal issue. My dad was doing his last stage and needed ambulances regularly during the year 2016. The day he got a heart attack, the ambulance did not reach my home and he could not be saved. So that was the breaking point for me".

I am staying in a city like Bombay, where everything is accessible, but ambulances are not accessible. Every time we called ambulances, there were different kinds of problems and that was a breaking point. For me, that's where the journey of DIAL4242 got started. Whenever I'm down, I look at the reason that I started this service.

Significantly during COVID times, we save a lot of people here. Even Mumbai Police has gone and recommended our services on Twitter multiple times. Today, there are more than 3 million members who are on board with us and have taken our services and there are some top corporates who are working with us. So that is the main impetus, how the journey of DIAL4242 got started. Today it is more than five years. Thank God and all the people's blessings that we are doing wonderfully well.

It is very difficult for any insurance company to sign up with any vendor because of a lot of checks and that is what DIAL4242 has done. They have proved their processes and quality to these insurance companies and the corporate. Some of the biggest corporations like Tata Group of companies had signed a contract with us.

So primarily, because of aggregation, we are high in terms of our reach. Secondly, our technology is much ahead in terms of competition. We have three different unique apps. One is the user app, the second is the owner app and the third is the driver app. Our technology has been used successfully by a lot of players. We also have built a SaaS model for hospitals where we are giving our technology to them. So that is what makes DIAL4242 stands out from the rest of the players. None of the players can truly say that they have the technology that DIAL4242 has or neither the reach we have.

So I think that is the kind of impact DIAL4242 has done. There are millions of lives that DIAL4242 have saved. But today, DIAL4242 has become a brand name or a name that people know that if I get in touch with DIAL4242, they will deliver on their promise. So that is something that we have achieved success with. Honestly, I am proud of the team who has done this and the entire organization.

Association with TATA Group of companies and Vaccination drive across India

We support a lot of corporates with vaccination, especially during the first and the second wave, a lot of people had to be vaccinated. In fact, we also would like to highlight we had partnered with Project Mumbai, which is an NGO. What we did is those senior citizens who cannot move out of their homes, need to be vaccinated. We ensure that we give our ambulance support to this NGO and get them vaccinated.

There was another NGO that was for little children, we supported them and helped them with vaccination. So besides corporates, it has been a lot of NGOs also. In fact, they have a lot of requests for people who cannot get the vaccination and we have supported them.

So today, people look at DIAL4242 as a place where they get in touch for something and they know that will happen. That is the philosophy that we are building upon, whether it is vaccination, whether it is a blood request. We get a lot of blood requests and we get it done. I am not saying that it is because of DIAL4242, thankfully, the kind of service that we have offered. We've also partnered with or gotten support from lots of individuals and institutions who are in different domains.

So someone is into blood donation, someone is into plasma donation, and they have supported us in our time of need. So this health ecosystem is something in which you have to partner with others, and support each other and get things done. Because finally, it is a matter of life and death. Nobody is a competition for me. Nobody is an enemy to me. For me or for DIAL4242, every life matters. Every blood given, every life saved that is important to us and that is the philosophy that we are working on.

Death due to the delay in getting medical assistance

Let me answer the first question. A lot of people died due to delays in ambulances. The reason for that delay in ambulances is that we don't keep the emergency numbers handy. We have gone through three rounds of COVID. I generally ask a lot of people to understand whether they really know the emergency numbers. If you look at the media, there are so many helpline numbers and you don't know which number to call in times of emergency. But if I ask you, do you know 911? You will say yes. You would know because you have seen it in Bollywood movies, Hollywood movies, etc. So 911 has been implanted in your brain.

If I ask you for a helpline number, you are not sure because there are so many numbers and to an extent, Indians still don't take their health seriously. We address it when it becomes a very stressful situation. We don't want to get into the prevention mode. So that is what we're trying to change with our membership model.

We are making ambulances affordable. Another reason a lot of people don't go by ambulance is that they can't pay for that. Even if it is only 800 rupees, the same ambulance would cost you $1,000 abroad, but Indians are not ready to pay 800 rupees. That is a problem that you need to understand. You can't just blame the society that we live in. For that reason, we have come out with a scheme, with 199 Rupees, one can get a free ambulance.

Jeetendra Lalwani states that "The ambulance industry is unorganized and unregulated. That is where the problem lies. Suppose you look at the data from the government or institutions, which says that there are enough ambulances in India if we actually manage them. That's where DIAL4242 comes into the picture. Because we don't own them, we aggregate ambulances.

The ambulances are primarily nearby the hospitals. They think that the business is primarily going to come from the hospital. So when you call for an ambulance, they are primarily coming from a hospital, which is quite far away from the location and that is the reason the delay happens. So with an aggregation system we  can give enough business to our ambulance partners. We can actually locate ambulances at such strategic locations that every individual can get an ambulance within 10 minutes or even lower. So that is what the mission DIAL4242 is working upon.

We do a lot of quality checks when we get a partner on board. Today, if you see social media, nobody has complained that there were certain things missing in our ambulances because that is the kind of quality check that we do. First, we have built a technology that keeps a check on all the processes. Secondly, we have quality control and thirdly, there is a redressal mechanism that is available. We are here to listen to you, even at 3 AM. If someone complains about it, the entire team gets into it and ensures that things go smoothly. In 99% of the cases, we have delivered what we have promised, that too in an industry that is highly unorganized.

It has been lots of doubts. Out of 10 occasions, nine times I've been knocked down. But the 10th occasion, when you win, even if it is a smaller victory, charges you. Even if it is one out of 100 that charges you to keep going. There have been times when I have been down. I have suffered personally in terms of relationships and finances. I had the courage and determination to make it happen. My dad was someone I used to love a lot. He was the best thing to happen to me. I remember that during my childhood, even till ten standards, he used to take me to school every day. When I failed in the second year of my college, he said to do whatever I wanted. So it was the best thing that happened to my life. So whenever I am down, I look at things like, even if I could not save my dad's life, I am saving the lives of others. Honestly, that has been the inspiration behind it. There are people who give good wishes to me, saying that what you have done is wonderful. You have saved so many lives. We remember during the COVID time, a lot of ambulances disappeared and we rose to that occasion. Mumbai police used to tweet about us at three o'clock at night. We ensured that we were there and support them.

I remember the case of a one-day-old baby during the COVID times whose parents had lost their job. She had heart surgery to be done. They could not even afford an ambulance cost. We arrange an ambulance for free to them. There was a lady, who was beaten by her drunkard husband, she was lying on the road, and we gave a free ambulance to her. We support the needy and poor. Corporates who came on board stated that they were very clear about our objective. They tested us before signing any contract. We kept our promise to deliver oxygen support, plasma support, blood support and ambulance support. What we have started as a small thing has now become a revolution. People today recognize me as DIAL4242 founder. I honestly have the blessings of so many people saying that you have done so wonderfully well. The credit goes to the entire team of DIAL4242 because it is not just me. It is the entire organization that makes it happen. So from top to bottom, from my call centre executive to my ambulance partners, all have made this dream possible.