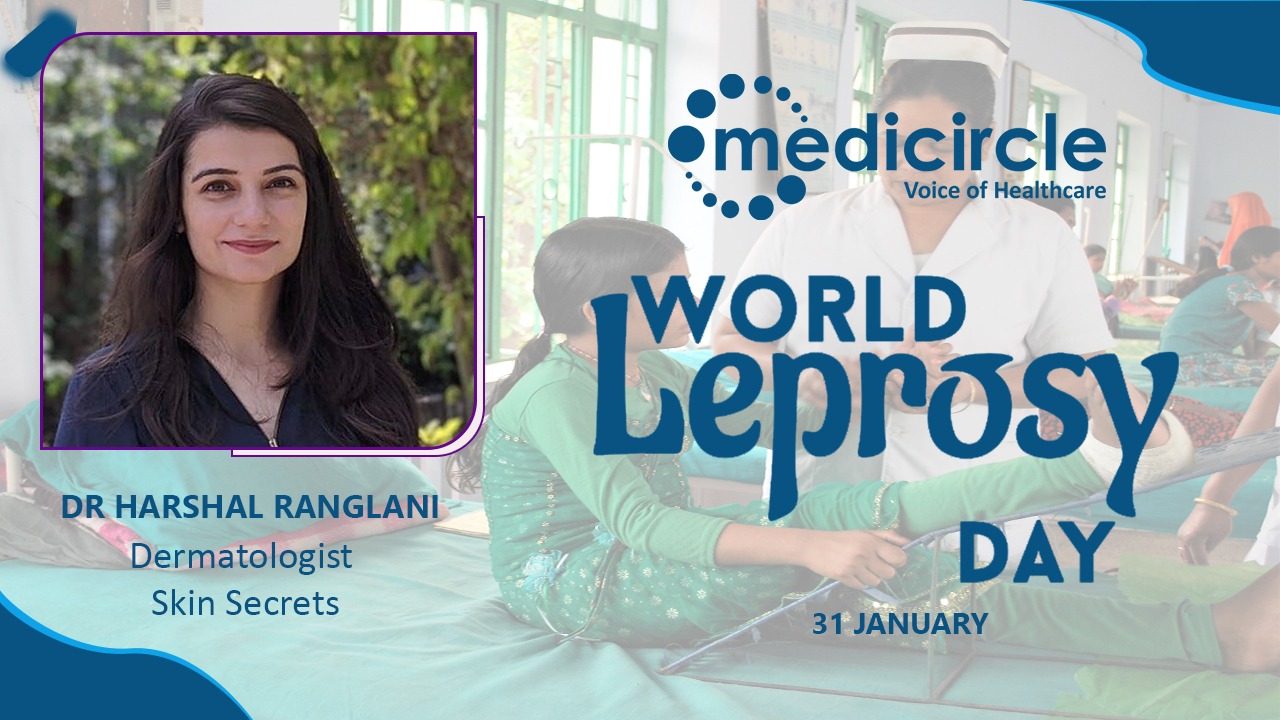 “We need everyone to understand that leprosy is curable. It is not a terminal condition,” says Dr. Harshal Ranglani, Dermatologist, Skin Secrets.

Dr. Harshal Ranglani, Dermatologist, Skin Secrets, has authored several publications in national and international journals. She adopts a holistic approach towards the management of skin conditions and skin care.  She is passionate about sharing all that she has learned over the past years as there’s a lot of misinformation when it comes to skin conditions and skin care.

Dr. Harshal shares her contribution towards leprosy, “As dermatologists, we are the first point of diagnosis of several leprosy cases. This is because leprosy often presents with skin changes like light patches on the skin. Often, the face and ears make developed thickened nodules.  During my post-graduation years, it was surprising to see an entire section of the ward reserved for admission of leprosy patients in reactions. There are a lot of cases still present in rural Maharashtra and rural Karnataka. We need more awareness among the general public about the various skin signs of Leprosy so that they can be brought to attention early,” she says.

Dr. Harshal shares her views, “The Declaration of Leprosy being eliminated in 2005 was premature. There should have been more monitoring over several years (or decades) to identify the trends before declaring Leprosy as eliminated in India. Today, India accounts for over half of the world's Leprosy cases. Screening for Leprosy cases should have continued for several years even after declaration elimination so as to not miss any cases that were in the incubation period earlier. Another important factor is that patients who are diagnosed with Leprosy may not always be compliant with the entire course of the medication due to the long duration. This leads to treatment failures, resistance, and relapses, adding to the existing burden and also potentially acting as a source of infection to others. Misdiagnosis and lack of awareness and focus on Leprosy among healthcare workers as well have played an instrumental role in cases being missed. Several cases of Leprosy remain undiagnosed for years. When they present, it is too late because of the widespread nerve damage and the resultant disabilities. The correct timely diagnosis is the first step towards achieving control of this disease. Patients often present late by the time overt clinical nerve damage has already set in and their quality of life impaired,” she says.

Dr. Harshal talks on the subject, “We need everyone to understand that leprosy is curable. It is not a terminal condition. One can be diagnosed with Leprosy, undergo treatment for it, and be cured. If diagnosed early, there may be no deformities at all. The resulting disabilities, if any, can be corrected either by surgery, or functional mobility can be ensured using other methods. But Leprosy by no means is as disabling as it was 50 odd years ago. Because leprosy has a very long incubation period, it is very difficult to determine who is likely to develop it. Not all household contacts of a leprosy case will develop leprosy. In the past 15 years, there has been a steady level in the number of new cases each year (annual case detection rate). This means there is the continual transmission. So, it is important that cases be diagnosed and treated early so that spread can be reduced. This can be achieved by rigorous case detection,” she says.

Leprosy is not easily transmissible

Dr. Harshal talks on Leprosy immunization to be included for required, “That is because leprosy is not easily transmissible. It is not as 'contagious' as other illnesses for which children are vaccinated against. One can get leprosy if one has been in close contact with an infected individual for a substantial amount of time. This infection shows up years and years later, with the bacteria remaining dormant in the body during this period. Developing the infection actually depends on the immunity of each individual person. For example, one may have been in contact with a patient for several years but it is not necessary that they will develop leprosy. This depends on the immunity and genetic makeup of each individual, which makes them differentially susceptible to developing the infection, and even the type of infection. The type of leprosy they get, either the more stable one like tuberculoid leprosy or the more disfiguring one like lepromatous leprosy depends, in part, on their genetic makeup. Hence, at present, a vaccine is not suitable to be included in the community immunization program,” she says.