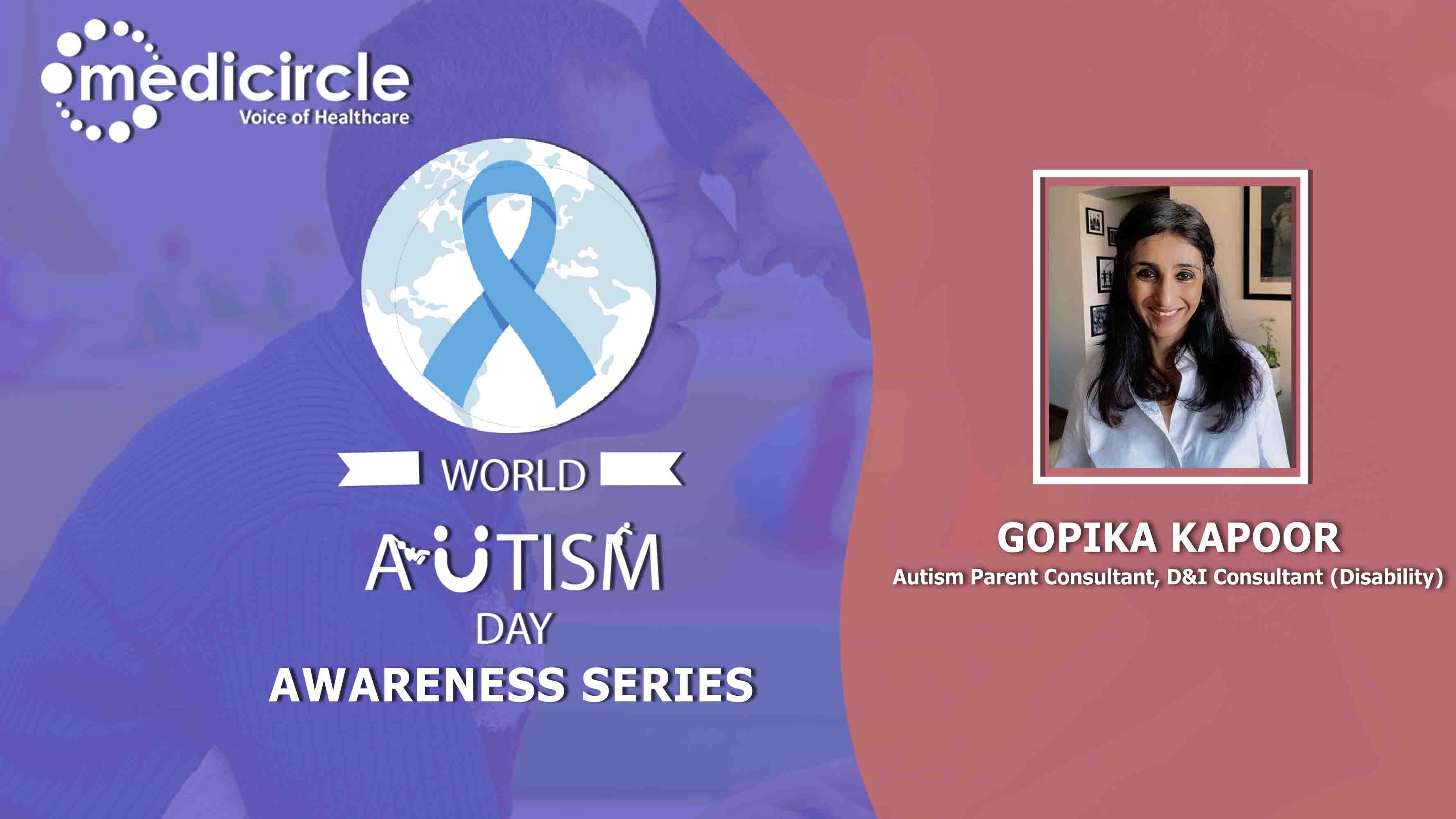 Gopika Kapoor’s Book “Beyond the Blue: Love Life and Autism” is an effective tool for all parents whose child is dealing with Autism, especially from an Indian perspective. Her invaluable contribution towards Autism awareness is definitely commendable.

Autism is a lifelong developmental disability that typically appears during early childhood and can impact a person's social skills. It is defined as a spectrum disorder that affects people differently. It also impacts the individual throughout its lifespan. As there is no known cause of autism, early diagnosis can help the person to live a quality life. On this World Autism Day, we at Medicircle are conducting Autism Awareness Series to impart knowledge and awareness amongst the general public about the therapies and treatments available to improve the quality of individuals and their acceptance in society by interviewing eminent pediatric neurologists, speech therapists, autism consultants, and clinical psychologists.

Gopika Kapoor is a writer and autism consultant. She is the author of best-selling books, Spiritual Parenting, Spiritual Pregnancies, Spiritual Relationships, and Spiritual Success published by Hay House India. Gopika has written for a number of leading publications and has been consulted on various communications initiatives with national and international NGOs. She has been awarded the Young FICCI Ladies Organization Human Achievers Award for exemplary writing. In order to spread awareness about autism, Gopika also hosts beyond the chats, a weekly conversation on Instagram with people connected with autism.

Autism has an impact on the social life of a child

Autism has an impact on social communication and social interaction, restricted interests, and repetitive behaviors. There are sensory differences in the way they perceive the world. The reason it's called a spectrum is that individuals could fall anywhere on the spectrum and the characteristics and symptoms could present in varying ways.

Social communication challenges or challenges across all areas are very common in autism. It is a lifelong condition, which means that it stays throughout life and there is no known cure for autism. But it is something which can be worked on.”

The cause for autism is still unknown and unclear

Gopika informs, “There are no causes for autism. Also, there is research going on about the causes of autism. Some probable causes are as follows:

The Center for Disease Control in Atlanta estimates that one in the 456 kids is diagnosed with autism in the USA. When it comes to India, we have varied figures. In India, the number is based on a study that was carried out in 2019, on the prevalence of autism puts it as more than 3 million people in the country. As the number of autistic cases might be much higher than this due to a lack of awareness and education in India. It is important to look out for these signs and symptoms in your child which makes him different from his peers:

Gopika says, “ Early intervention is a key to autism and it works. The earlier autism is diagnosed, the better. There are faster chances of progress. As you already know that the brain grows its maximum at 3 -5 years of age. Its ability to absorb is the best at this age. So, there is a higher chance of progress at this age.”

The correct treatment for autism

Gopika explains, “ There are a lot of therapies for autism-like :

The best therapy is one that suits the child and the family. There are therapies like standard therapies where you need to spend 40 hours/week with the child on therapy and it's like a nine to five job. It's extremely taxing on parents to drop everything and do the therapy for their child. There are many circumstances in different families like financial issues etc. The best therapy was your child is a natural environment and natural routine. Development approaches with all naturalistic ways that can be incorporated into the daily routine of the child works the best in a natural setting. Feeding the child and working with the child is easier for parents as they do not need to carve out special times.

Gopika Kapoor’s Book “Beyond the Blue”

Gopika informs, “My book is called Beyond the Blue, Love Life and Autism. So when my son was diagnosed, I started reading a lot, read a lot of materials, lots of books, ordered lots of books, and read them. Everything was from a western perspective. I am a writer and Master in Journalism. So, I decided to write a book on Autism. In these past 10 years, I have worked with 400-500 families. Each family has taught me a lot. At the same time, I have personal knowledge and experience that I could combine and share with everyone. Plus, there are many Indian parents who do not openly talk about autism. So, writing is my first love which I have chosen to express my journey. And, this is how “Beyond the Blue” was born. And it's available all across India on Amazon and Flipkart.“Beyond the Blue” came in last November and I am working currently on a Hindi translation of it. I am hoping to translate it into many other languages. The primary focus of “Beyond the Blue” was not recognition but awareness for autism. So I started a blue chat on Instagram, Linked In, and Facebook as well. I used to host it as an Insta live session on Wednesdays. It feels good being a mother and consultant and spreading the word about autism.

Gopika says, “I have started working with corporates on hiring people from the autism spectrum. I have started taking baby steps toward helping autistic patients. It is important to make hiring possible autism patients and spread awareness about autism”