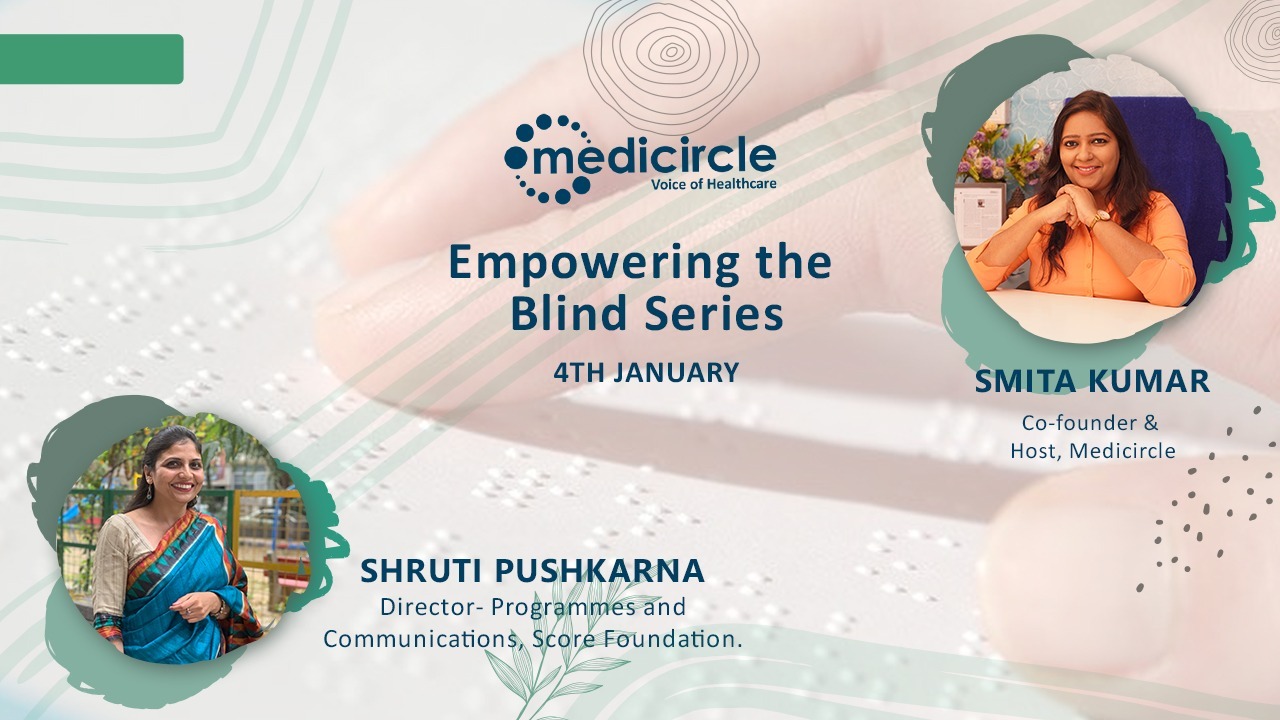 “As per Census 2011, there are 5.4 million blind people in India. WHO puts the count to approximately 63 million and it's growing with 20% of the global population residing in India,” says Shruti Pushkarna, Director- Programmes and Communications, Score Foundation.

Do you know India is home to over 20 percent of the world’s blind population? Nearly 40 million people in India, including 1.6 million children, are blind or visually impaired. At Medicircle we are conducting the Empowering the blind series on the occasion of World Braille Day. We feel braille is not just a code but a source for the empowerment of the Blind. Through our Empowering the blind series we aim to create awareness about the situation of the visually impaired population in India, and highlight individual and organizations actions that strive to create a world full of possibilities for the visually impaired

Shruti Pushkarna, Director- Programmes and Communications, Score Foundation is an Experienced Communications Manager with a demonstrated history of working in the non-profit organization management industry.

Score Foundation works with various stakeholders to make it clear that if we change our perceptions a lot can change as Blindness is not the real barrier; it is the mindset.

Shruti shares light on the subject, “The numbers are shocking. As per Census 2011, there are 5.4 million blind people in India. But WHO puts the count to approximately 63 million and it's growing with 20% of the global population residing in India. The number of blind children in India has been accounted for which is humongous, and we cannot ignore it but there's also a sizable percentage of blind people who have acquired blindness later in life, which is post 30 and that number is not accounted for. So, as far as making them Atma Nirbhar, we are in the day and age of post-COVID and technology is the king and the virtual universe is a new reality. Most people are unaware that blind and visually impaired people can work using screen readers and software either on their laptops, or using talkback feature on their iPhones or Android phones and they are seamlessly connected to the mainstream activities, they access newspapers, digital content, they can participate in education and employment just like anybody else can do. So, to make them Atma Nirbhar, all we have to do is educate them and give them access to technology, whether it is the devices or internet penetration,” she says.

Combination of Braille and technology

Shruti explains, “A lot of blind people have made their mark in the IAS and IFS services and are doing very well. The whole thing about screen reading software like JAWS is that Braille has outgrown its time, though it's empowering even today as it helps in language skills, writing, spelling, etc. But you have to side by side introduce technology at an early age because Braille is still an exclusive medium. If a child/ adult is writing in Braille, how is the mainstream supposed to process it? When the child goes from school to college, which is a mainstream regular normal scenario, how do you communicate with your teacher or submit your assignment? With technology, it makes it very easy because you're now typing on a computer; there are Braille keyboards that you can attach to a regular computer so even if the blind person is typing in Braille, the output is digital. So we have to do a combination of Braille and technology because people will take time to adapt to technology but it’s the only way forward. Also, one thing that we misunderstand is that we haven't really understood what digitization really means for blind people, because what happens is, we think that anything that's available on the computer is readable. So there are a lot of official documents that have been issued in terms of guidelines during COVID by the government department, in fact, by the Ministry of Social Justice, and empowerment, which is supposed to cater to the needs of persons with disabilities. But they have issued them in PDF files, which are scanned images and the screen reader doesn't read that, only text to speech works. So we need to have that understanding very clear. And of course, the internet penetration and the fact that everyone can afford a device that needs to become a reality,” she says.

Challenges faced by the blind or the partially blind in India

Shruti talks on the subject, “See, there are a lot of challenges:

The mindset towards the blind – When one looks at a blind person, they just write them off because they think that he is a dependent person, they cannot study or work, all they can do is sing, or become a music teacher. To wash that stereotype image is the biggest challenge and to be able to prove yourself to the world.   Access to education – After the issue of altering the mindset is tackled, it is then that you can make your way up the hierarchy and into employment. Now, when you go to the mainstream forms of inclusive education or include the regular job space. Again, there are people who are going to question how is this person going to use a computer?  Am I going to have to make some special arrangements in my physical environment? As far as my school is concerned, or my office space is concerned to be able to accommodate? Is it something I'm doing out of this corporate social responsibility? So those are the challenges that the person is up against. And also there are some parents who also write their children off. So there are mental attitudinal biases that the person is against. And you happen to cross them, like at every point. Issue of access - whether it is to the physical environment or to the digital environment. Like for instance, today, a lot of blind people are accessing banking online, and it's very seamless. But there are websites, which do not adhere to the WPC accessibility guidelines and there are issues that the blind person will encounter and will have to take sighted help to be able to get across to that service. So there are issues of access, trust, and the potential people don't recognize you as a part of the human resource of the country.

Shruti talks on the subject of policies for the blind in India, “There are a lot of good things about our policy and law as far as it's there on the paper and in fact, Rights of Persons with Disabilities Act 2016 is one of the most progressive acts this country has but it all boils down to the education and awareness levels of those health workers, or that staff, or the implementing agent that might be in wherever whichever corner of the country. So apart from formulating policies, what we are lacking, whether it's the private sector or the government sector, is actually about educating the last mile implementer, on how to be able to interact with the blind person, so that the person can actually benefit from that policy. So the awareness levels need to be raised, they need to know that these policies are made to safeguard the interest of visually impaired people as much as of anybody else who's able-bodied. In fact, if a blind person shows up in a hospital unattended, they are shocked that there is no caretaker with them. But there are a lot of people who are living alone, and they don't have the luxury of having a caretaker with them all the time. And post COVID it has become harder for them as for blind people, everything is about physical health, tactile and feeling things but now people are not willing to extend that physical assistance to them,” she says.