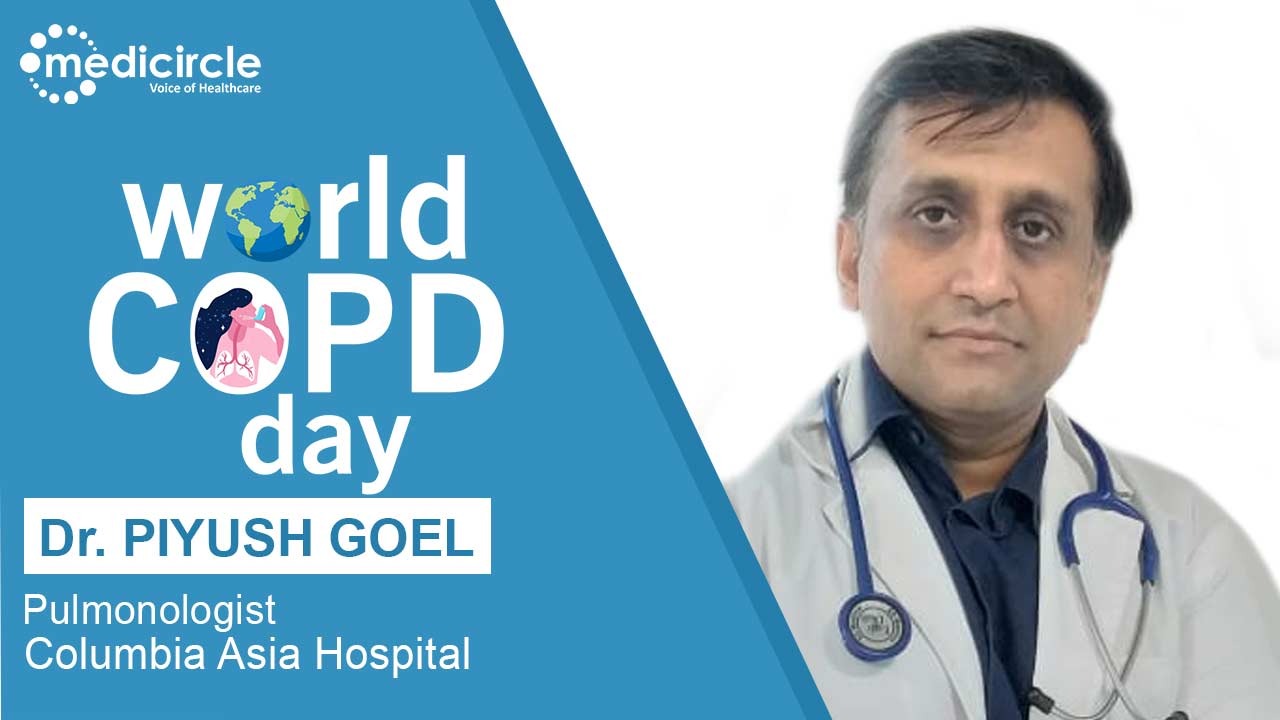 Dr. Piyush Goel shares his expertise on treating COPD through inhalers which is the mainstay of treatment. He also explains that with the right and early detection conventional medicines can help to stop the progression of the disease. A must-watch interview for smokers and those suffering from long-term lung issues.

Every year the third Wednesday of the month of November is observed as World COPD (chronic obstructive pulmonary disease) day to raise awareness about the chronic obstructive pulmonary disease (COPD) i.e. lung-related diseases and to raise awareness about the diseases related to the lungs. to improve COPD care.

The day is observed by the Global Initiative for Chronic Obstructive Lung Disease (GOLD) in collaboration with the World Health Organization, health care professionals, and COPD patient groups around the world. The first World COPD Day was observed in 2002. Chronic obstructive pulmonary disease is a lung disease that blocks the airflow of the lungs, making it difficult to breathe.

Research estimates suggest there are 30 million COPD patients in India. India contributes a significant and growing percentage of COPD mortality which is estimated to be amongst the highest in the world; i.e. more than 64.7 estimated age-standardized death rate per 100,000 amongst both sexes.

We at Medicircle, are taking this initiative on World COPD Day to bring awareness and educate people about healthy lung care and functioning especially after the pandemic wave.

Dr. Piyush Goel is a Tuberculous and Chest Diseases Specialist and Pulmonologist Gurgaon and has experience of 12 years of in these fields. He is a member of European Respiratory Society, Indian Chest Society, European Society of Intensive care medicine, Indian Sleep Disorder Association, and Member of Indian Chest society

Dr. Piyush Goel says, “There are many types of lung diseases like asthma, allergy, and bronchitis. COPD is mostly seen in the elderly age group above 50 years. This is not seen in younger children mainly due to major causes like smoking and air pollution. COPD is a slowly progressive disease. Hence, it is not seen commonly in children. Smoking and pollution can affect the lungs with gradual onset. Exposure to smoke and air pollution in children can lead to long-term COPD.

Dr. Piyush Goel says, “COPD suggests that it is Chronic Obstructive Lung Disease which means it is a long term lung disease. The bronchus of the lungs starts to swell and inflame which results in damage to COPD. The causes are -

This can damage the airways causing narrowing of it. This may result in -

Lung damage is COPD is reversible

Dr.Goel says, “COPD is a non-reversible disease. But, we can slow the progression of the disease and symptomatic relief. Some precautions are -

The quality of life can be improved with the early detection of COPD. There are many medicines to control COPD.”

Dr. Goel informs, “The diagnosis of COPD is -

Pulmonary Function Test is the gold standard test for COPD which checks the function of the lungs.”

Dr. Goel informs, “There is a confirmed cure and is a progressive disease and needs long-term medication. The treatment for COPD is -

Inhaler - Inhalers is the mainstay of treatment  Inhalers have no side effects Inhalers help to stay symptoms free Inhalers can reduce the mortality rate."