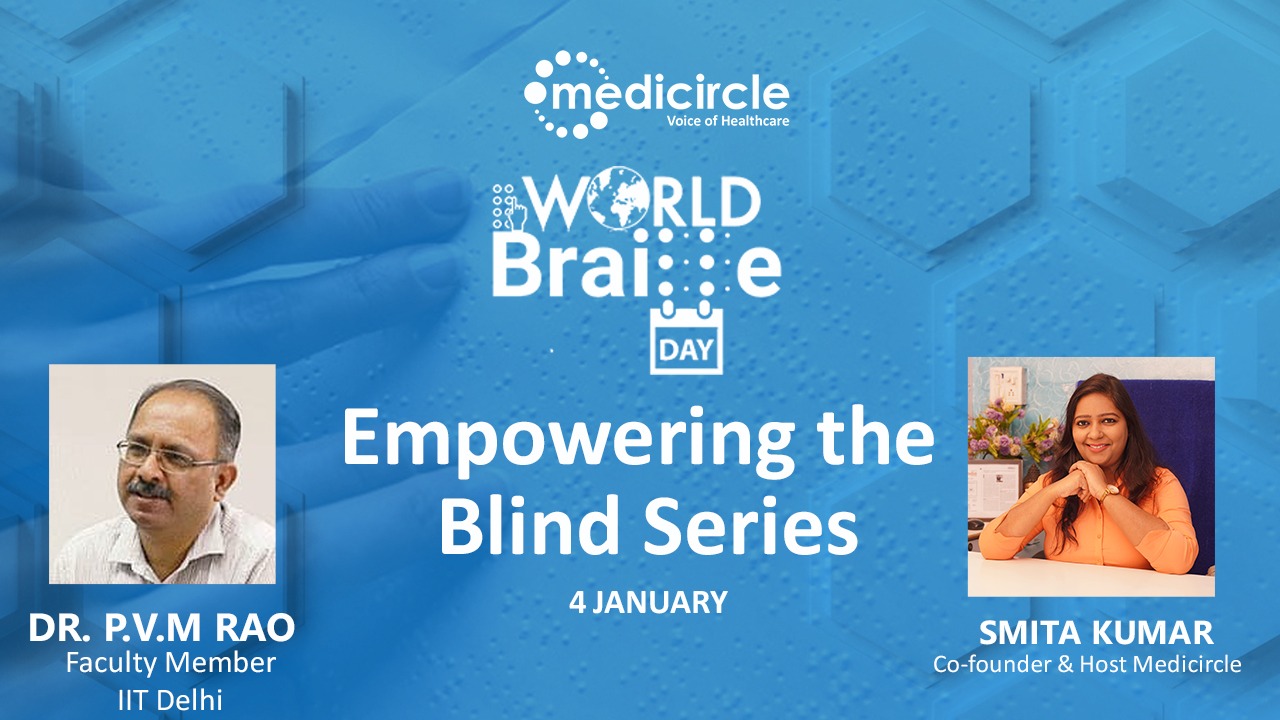 “Text to speech is useful in many situations but eventually, text to Braille is inevitable when it comes to creating opportunities for both education and employment,” says P.V.M Rao, Faculty Member, IIT Delhi.

At Medicircle we are conducting the Empowering the blind series on the occasion of World Braille Day. We feel braille is not just a code but a source for the empowerment of the Blind. Through our Empowering the blind series we aim to create awareness about the situation of the visually impaired population in India, and highlight individual and organizations actions that strive to create a world full of possibilities for the visually impaired

Dr. P.V.M Rao, Faculty Member, IIT Delhi is a professor in the departments of mechanical engineering and design at IIT Delhi. He also serves as head of the department of design. He is a co-founder of the Assistech lab in Khosla School of information technology, which works towards the development of assistive technologies for the empowerment of the visually challenged. He has also authored more than 100 research papers in journals and conferences.

Indian Institute of Technology Delhi is one of the Twenty Three Institutes of excellence for higher education, research, and development in science, engineering and technology, and management in India.

Dr. Rao shares his opinions, “Making people with visual impairment and blindness “Aatma-nirbhar” is really a challenge for India. Many efforts are needed at multiple fronts, some of which include:

Pro-active government policies both at central and state government levels to adopt the universal design, development of assistive technologies to empower people with visual impairment and blindness. As mobility is a precursor to any activity, addressing independent mobility (both indoor and outdoor) issues for people with visual impairment. Liberal funding and grants to startups and industries in the development of assistive technologies are not market-driven. Initiating and implementing programs to train AT personnel including special educators and rehabilitation specialists.

Major improvement in providing access to ATs,” he says.

Technology can help the blind

Dr. Rao sheds light on the subject of challenges of Digitalization for the blind, “Presently there are two options for people with visual impairment and blindness to access digital content. One is text to speech using tools such as JAWS and NVDA which have been adopted by many people. The second option is text to Braille. This option is sparingly used for many reasons. One is economics, the second is the drudgery of printing digital text on Braille paper to access it and the third is the non-availability of refreshable Braille displays. Text to speech is useful in many situations but eventually, text to Braille is inevitable when it comes to creating opportunities for both education and employment. Moreover, text to Braille provides active learning as compared to text to speech which is passive. Technology can play a major role in achieving this objective as well as in making pictorial content accessible through tactile modality,” he says.

Challenges faced by the blind/ partially blind individuals in India

Dr. Rao shares insights on the topic, “There are many challenges. These include

Overcoming social stigma that people with disabilities can be empowered to be on par with any other when it comes to contributing to the economical and social prosperity of the country.  Lack of awareness among users and other stakeholders regarding various choices of ATs available to them and the role ATs can play in their activities of daily living Lack of quality ATs which are also affordable.

Lack of marketplaces and marketing channels to access ATs,” he says.

Indian health care policies for the people with vision

Dr. Rao explains, “There have been many efforts by governments and organizations to leverage technology to bridge the wide gap which exists between benefits provided to people with sight and those without. However, for a large country such as India, these efforts are not adequate, and much more needs to be done,” he says.