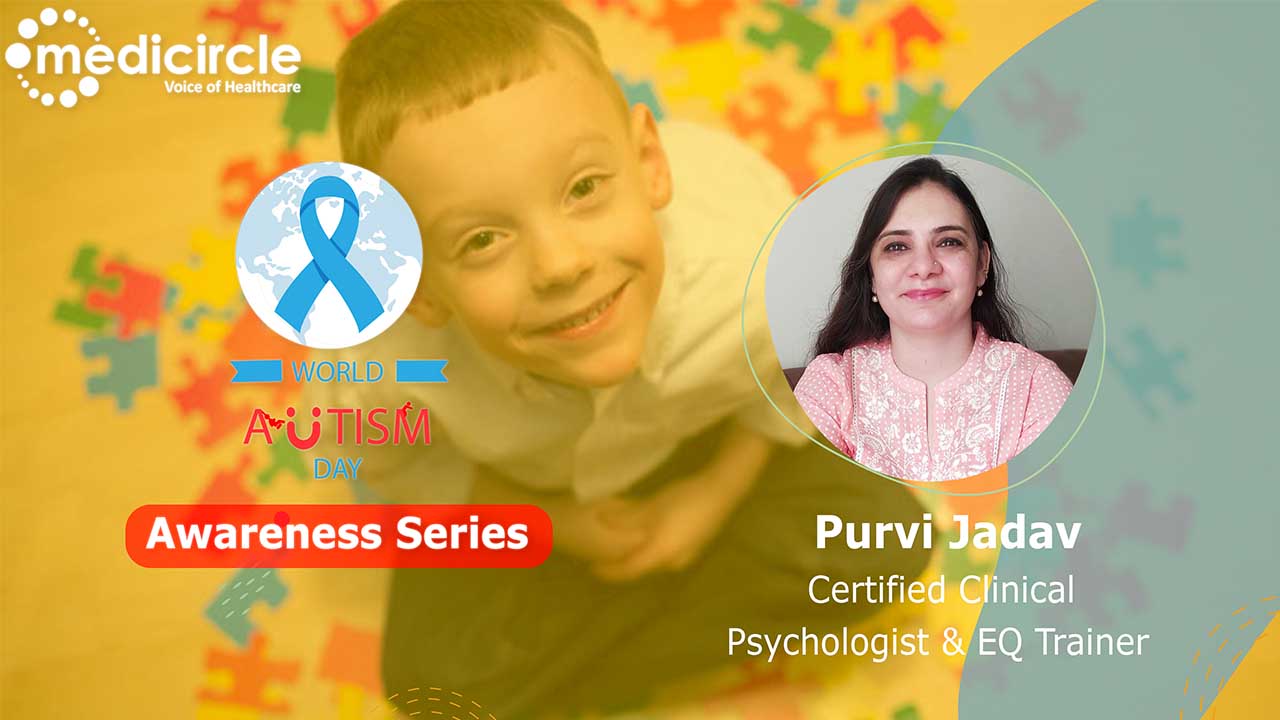 It is helpful if at an early stage parents identify developmental issues in the children and get the intervention started. This way autism can be managed very well as all the therapists will come into the picture at the early stage and help in managing the condition, says Purvi Jadav.

Children are the apple of the eyes of their parents. When a couple is expecting a child, they never ever imagine that their child will suffer from any disorder. But unfortunately, some children get affected by autism spectrum disorder which is a developmental disorder. Medicircle is conducting World Autism Day Awareness Series by featuring eminent psychologists, therapists, and developmental pediatricians to spread understanding about autism and to educate people so that they can create meaningful lives for people around them who are suffering from this disorder.

Purvi Jadav is a Certified Clinical Psychologist and EQ trainer specializing in Children, Teenagers, and Marriage Counseling. She is passionate about understanding children and teens and their issues and loves helping them to be happy, healthy, and productive individuals.

Purvi explains, “At the age of 18 months children start communicating through proper small phrases, maintaining proper eye contact and walking small distances. However, some children may show some different set of behaviors like walking on toes, repetitive behavior or repetitive action for hours, not looking at other person's eye, inability to socialize with their peers or their friends or siblings, getting really irritated with even slight loud sounds which are very regular in our day-to-day life, like bursting of the balloon or clapping or the whistle of the pressure cooker. They look from the sides of their eyes. They lack an emotional display. These kinds of symptoms are very common in autistic children. So, when these children are showing these symptoms for more than three months then one needs to consult the regular pediatrician. The regular pediatrician will do basic screening, observe the child's behavior, and then would refer to a developmental pediatrician who will do screening based on the American Psychiatric Association's DSM-5 checklist. If the child falls under those scales, then they will guide the parents on what to do further. There are mild, moderate, and severe autism problems. Through screening, the scale in which the child falls gets evident,” says Purvi.

Purvi mentions, “Researchers are still exploring causes such as pollution, viral infection, a side effect of medicine which mothers might have taken during pregnancy without informing the doctor or without the guidance of the doctor, complications during pregnancy etc. Genetics has a role in triggering autism. Till now in the majority of the cases, we are seeing that children are genetically getting affected. There are some traits in grandfather, father or mother or any other member in the family due to which they have been found to be developing this disorder.”

Purvi explains, “There are several therapies that depend upon the severity of the problem. Looking at the condition, developmental pediatricians suggest the therapies that can help in the best manner. Different therapies have different benefits. For example, occupational therapists will do certain exercises to make the child aware of their body and would bring certain changes like improvement in their walking position, if the child is walking on toes. They would make them walk on the foot with the complete foot down. Speech therapists would help in improving their eye contact while speaking and help them to learn speech and language. They would help them to improve their comprehension. Firstly, they would start with words then they would work towards the sentence formation. They would start giving them pictures to understand the action and what the picture is portraying. Child psychologists will help them out in how to socialize; improve their socializing in school and how to behave in situations like birthday parties etc. They even help the parents to handle the child. They give a sort of training to parents to understand the child's aggression or a certain type of behavior when the child is behaving abnormally. Special educators will help the child to manage and cope with their regular studies. As most of the time they live in their imaginary world they are less interactive, they don't ask questions or they will not answer when a question is asked. Special educators will understand the child's requirement of the studies, they will help them out and they will teach them the way to understand a topic,” says Purvi.

Shadow teachers in the school play a vital role too

Purvi emphasizes, “Even schools are providing shadow teachers to help such children. Parents can request the school to provide a shadow teacher to the child. They will help in managing the child's day-to-day school routine. They will see to it that the child is attentive in the class, is not left out, or during recess time is able to gel with peers and sit with them, and have food. They encourage them to work with other students during art and craft activities that are going on in the class. It's compulsory for schools to provide shadow teachers to special children."

Purvi mentions, “Earlier people were not aware of developmental disorders. Now they are becoming more aware. It is good that people are reading about child psychology and developmental disorders. Parents are more concerned. Even the small changes that they notice in the child are immediately informed to their pediatrician and steps are taken to address it fast.”

Children display symptoms of autism due to a lack of attention

Purvi emphasizes, “We see cases where children are showing some autism symptoms due to lack of attention from parents and less exposure to the social environment. Though they are not autistic, they are not facing any developmental problems but because of lots of screen time on smartphones or TV, they show some symptoms. We can see a delay in speech in many children but during the intervention, we come to know that problem is something else. Both parents are working, and they are not able to give time to their child, and that is why the child is spending lots of time on mobile or watching cartoons and that is why the problem. Parents don't have time to take them to the garden or to take them out to play so the children are lagging behind in socializing. They don't know how to deal with other people and when at the age of three or four, when they start going to school, parents realize that their child is different from other children. School also starts noticing the symptoms. They inform parents and then intervention starts. It might happen that the child is not suffering from autism but showing symptoms due to other reasons,” says Purvi.

Autism can be managed well if identified at an early stage

Purvi says, “Autism is a developmental disorder. It will remain throughout with the child even when they grow up into adults. However, the symptoms are more aggressively visible during their childhood or when they are teenagers. It is really helpful if at an early stage parents identify it and get the intervention started. This way autism can be managed very well as all the therapists will come into the picture at the early stage and help in managing the situation. The child would also get used to therapy from a young age and developmental issues can be worked upon well.”