Know about the rare trait of Albinism from Dr. Aseem Sharma 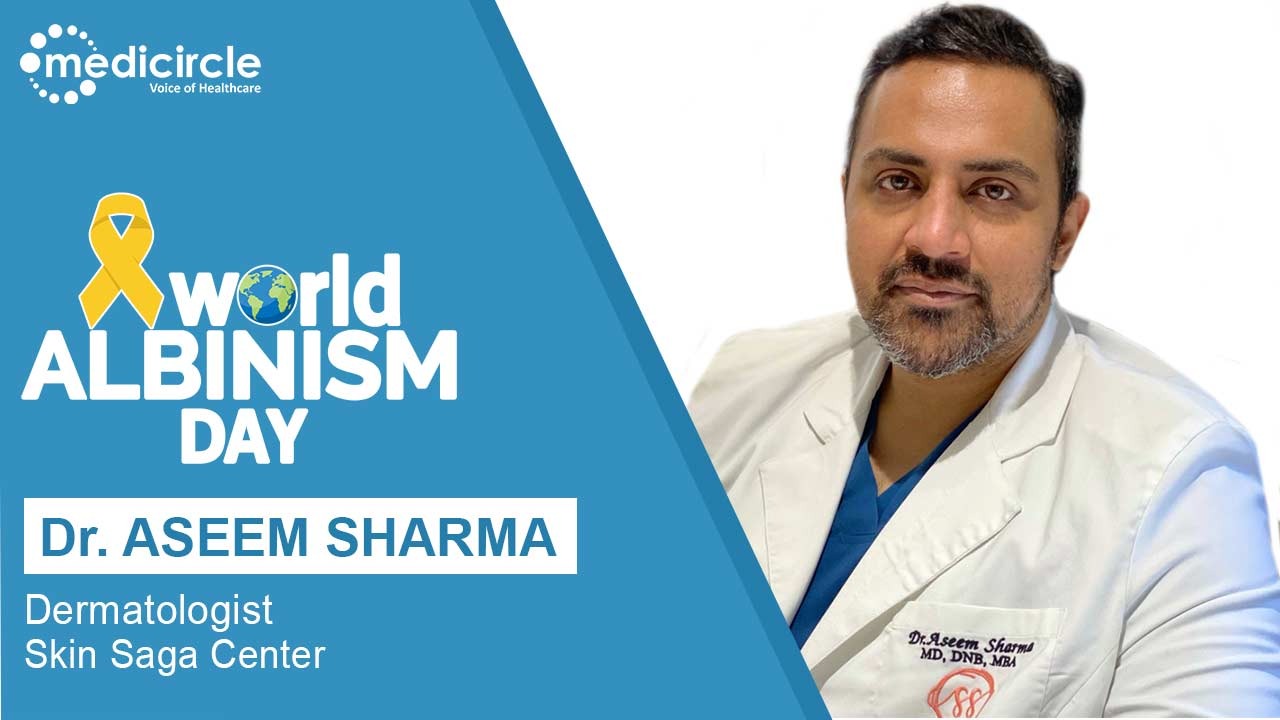 Dr. Aseem Sharma sheds light on the rare form of Albinism that needs awareness on this Albinism Day in June 2021. He shares his valuable expertise about albinism and its complication in visual defects.

Albinism is a rare disease, according to the National Institutes of Health (NIH). It is characterized by a lack of melanin pigment in skin, hair, and eyes. Those with this condition are vulnerable to sun exposure as it increases the chances of skin cancer and severe visual impairment. International Albinism Awareness Day is observed every year on June 13th to highlight the rights of those born with albinism and increase awareness about this genetic condition.

We, at Medicircle are conducting a series on this International Albinism Awareness Day to create understanding and prevent any misinformation against those who have albinism.

Dr. Aseem Sharma is an alumnus of the prestigious Armed Forces Medical College and he is a Chief Dermatologist at the Skin Saga Center for Dermatology, Mumbai, and he is retired from the Indian Air Force and has an overall experience of 10 years. He is a triple postgraduate in dermatology -MD, DNB  and has a one-year fellowship in hair diseases trichology. He is an expert on skin diseases and disorders with expertise in aesthetic, cosmetic procedure surgery, and lasers.

Know the science behind albinism

Dr. Assem Sharma says, “Albinism is a condition which is congenital which means it is present since birth. Most people with albinism will be born with discoloration of the skin. Also, people with albinism have some issues with their eyes at birth. Albinism can be partial or complete. If somebody has partial albinism, they are possibly born with skin changes and later on develop visual defects. So it can vary for most people and it starts with birth.”

The rare trait of albinism

Dr. Aseem informs, “Albinism is rare in India, as compared to other parts of the world. Even with such a great population, India has 2 lakh cases of albinism and more. It is a  common myth that a lot of patients ask me that people with darker skin have fewer chances of albinism but this is absolutely incorrect. There is actually a type of albinism which is called Type 2 Albinism. This Type 2 Albinism primarily happens in Africans and Americans or people with very dark skin. So people of any race with any skin color, any sex, any age can present with albinism.”

Persons suffering from albinism are more prone to visual defects

Dr. Aseem informs, “ As compared to dermatologists, ophthalmologists or eye specialists consult most cases of albinism because of visual defects. These visual defects can develop not only at birth but also later in life. It can start with partial albinism progressing towards complete albinism. This visual problem can progressively worsen over the years. It can start with simple photophobia which is increased sensitivity to light to probably involuntary eye movements. This visual defect arises because the brain is receiving fewer signals from the eyes which can further lead to blindness. The entire spectrum of visual defects  can be easily covered by this disorder of albinism.”

Dr. Aseem states, “There is no cure for albinism. It is a genetic and hereditary disorder. There are a lot of therapies that one can opt for.

Gene Therapy: This therapy is well researched in the field of albinism. But at present, we don’t have anything solid. Gene therapy is basically targeted at the enzyme which converts tyrosine into melanin. To put it simply, melanin is the pigment that gives color to the hair, eyes, and skin which protects us from ultraviolet radiation. So, research is still ongoing about the same.