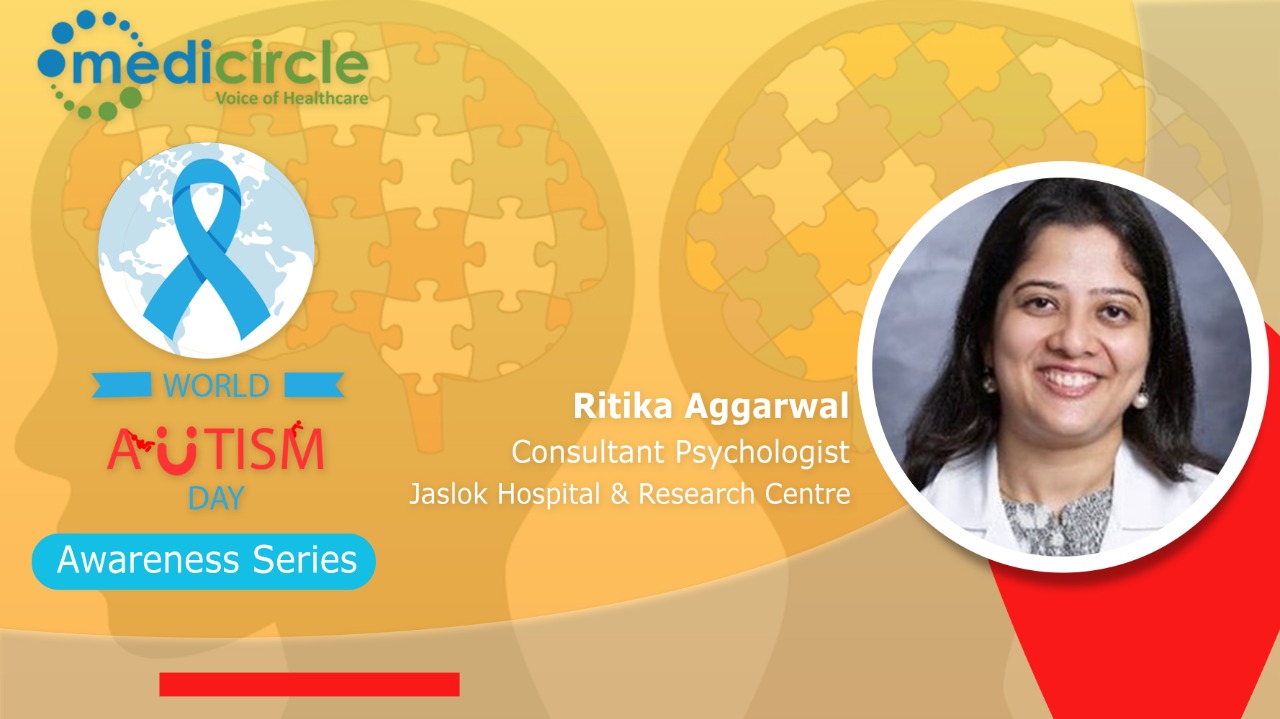 Each Autistic child has unique strengths and challenges in social communication behavior and cognitive ability. Treatment cannot be a one size fits all, it has to be tailor-made to fit the child properly. Parents have to understand that early intervention is helpful at any age” Ritika Agarwal, Consultant Psychologist

Autism is a developmental disorder, which affects the learning outcomes, communication, and socialization behaviors of children. World Autism Day falls in the month of April every year. Medicircle is conducting World Autism Day Awareness Series featuring eminent Pediatric Neurologists, Speech Therapists, and Clinical Psychologists from well known healthcare organizations to get their views and to spread awareness on autism.

Ritika Aggarwal is a Consultant Psychologist at Jaslok Hospital and Research Centre, Mumbai. She has been playing an active role in creating awareness regarding mental health concerns through various mediums like written articles, videos and workshops.

Ritika informs, “Autism is usually diagnosed clinically using the DSM - 5. A doctor checks the child's developmental history and behavior to make a diagnosis. There are no specific medical tests to diagnose Autism. Autism Spectrum Disorder can sometimes be detected at 18 months or younger. By the age of about two years, a diagnosis by an experienced professional can be considered very reliable. Two specific categories to be diagnosed with Autism are firstly communication and social interaction and the second is restricted and repetitive behaviors or patterns of behavior, interest or activities that include sensory issues.”

Ritika explains, “Some common symptoms to look for Autism – Delayed speech, losing speech at around 2 years, not pointing at objects or waving to people, not responding to the name calls, difficulty in interacting with others, preferring being alone, don’t know how to play with others, repetitive words or phrases, difficulty in reading social cues for eye contact, not tracking people with their eyes, not imitating facial gestures, little or no imaginative play, unusual reactions to the things smell, taste, feel, sound, and this can sometimes result in temper tantrums, and difficulty in adapting changes in their routine.”

Each child has different symptoms in Autism

Ritika elaborates, “Autism is a spectrum disorder which means it appears in the range of forms and levels of severity. Some individuals may develop typical capabilities in terms of speech, languages but develop exceptional skills in certain areas, and struggle with lifelong social and behavioral differences whereas others may have challenges with communication, sensory sensitivities, behavioral issues, such as excessive tantrums, relative behaviors, aggression and self harm. As it is a Spectrum disorder, every child will not present in the exact same way. Every child with Autism has different symptoms. As per the latest guidelines, Asperger's Syndrome and Pervasive Developmental Disorder has been put under the umbrella of Autism Spectrum Disorder.”

Ritika says, “Tests are done to either screen the child or to identify the level of severity of Autism. Popular tests done in India are the Indian Scale for Assessment of Autism (ISAA), Childhood Autism Rating Scale (CARS), Modified Checklist for Autism in Toddlers (M-CHAT).”

Ritika explains, “Research has found that both genetic and environmental factors play a role in causing Autism. These factors appear to increase the risk of a child developing Autism. But it's important to keep in mind that increased risk is not the same as a cause. Some genes or changes associated with Autism can also be found in people who don't have the disorder. And similarly, not everyone exposed to environmental risk or risk factor for Autism will develop the disorder.”

No cure or prevention available

Ritika stresses, “There's no way to prevent or cure Autism spectrum disorder at this specific time, but there is treatment available. The goal of treatment is to maximize the child's ability to function by reducing the autistics symptoms of features and supporting development and learning. Early diagnosis and intervention are most helpful which can improve critical, social, communication, functional and behavioural skills. However, it's also important for parents to remember that, intervention is helpful at any age. Each child has unique strengths and challenges in social communication behavior and cognitive ability. Treatment cannot be a one size fits all, it has to be tailor made to fit the child properly. Best interventions or treatment options can thus vary depending on an individual's age, strengths, challenges and differences.”

Ritika mentions, “Medication does not treat the core symptoms of Autism, but they can be given to help with certain symptoms, such as attention problems, hyperactivity, anxiety, seizure control, and aggression. So, these kinds of issues are normally dealt with by a Pediatric Neurologist. Music therapy, dance, and movement therapy can be used in conjunction with other therapies. Some of the therapies are:

Occupational Therapy – It teaches skills that help the child live independently as much as possible. These include dressing and eating relating to people. An Occupational therapist would also do Sensory Integration therapy, which helps with sensory issues such as body talking.

Speech Therapy - Improves communication skills, verbal and nonverbal. We have Augmentative and Alternative communication devices which can improve nonverbal communication. It’s important for a parent to learn how to use this device with their child. And once you learn it, you can continue at home.

Social Skill Training – It tells about the skills that a child needs to interact with others. Helps in solving conversation problems.

Family Therapy - Parents and other family members can learn how to play and interact with the children in ways that promote social interaction skills, manage problem behaviors, teach daily living skills and communication.”

Family support is very much useful

Ritika expresses, “In India, there is also a stigma around Autism to some extent. So, one can work with the family on that, to help them understand that it's nothing but another version of normal. And we all need to work towards helping this child and supporting him or her towards becoming the best potential of themselves. So, I normally recommend family therapy. And the next thing I'd normally recommend is joining a family support group.”

Valuable advice to the parents of an Autistic child

Ritika points out, “Sometimes when you go to the pediatrician, please do remember that the child is also a normal child, he/she may have other medical issues and you need to treat those as well.

Parents get so busy with the treatment process that they tend to forget that they need to also focus on their child’s strengths. Those strengths also need to be enhanced in building up their self esteem.  Sometimes parents need to try and find fun ways to recreate exercises for the child so that the child actually enjoys the activity and doesn't find it tedious. So, first parents have to figure out what works for their child and should work accordingly. Parents should not focus only on educational aspects but should look beyond education. From a young age, parents need to think about what this child can do career wise as the future plan. Accordingly, prepare them for the same because it takes time for them to learn those skills. And it should be ideally based on their interests and strengths. As soon as the parent get to know their field of interest, they should start cultivating it from childhood.”

Ritika says, “Individuals with Autism have the potential to grow and improve. So, it's important to find and start effective services, treatments, and education as soon as possible. The earlier these children receive appropriate treatment, the better will be their prognosis. It's never too late. Worst cases can improve their quality of life. Slow progressors can still live happy and productive lives with appropriate support. It's just the matter of giving support, help, and being there for them.”