Sarcoma - its relation to obesity and age in words of Dr. Bhavin Visariya 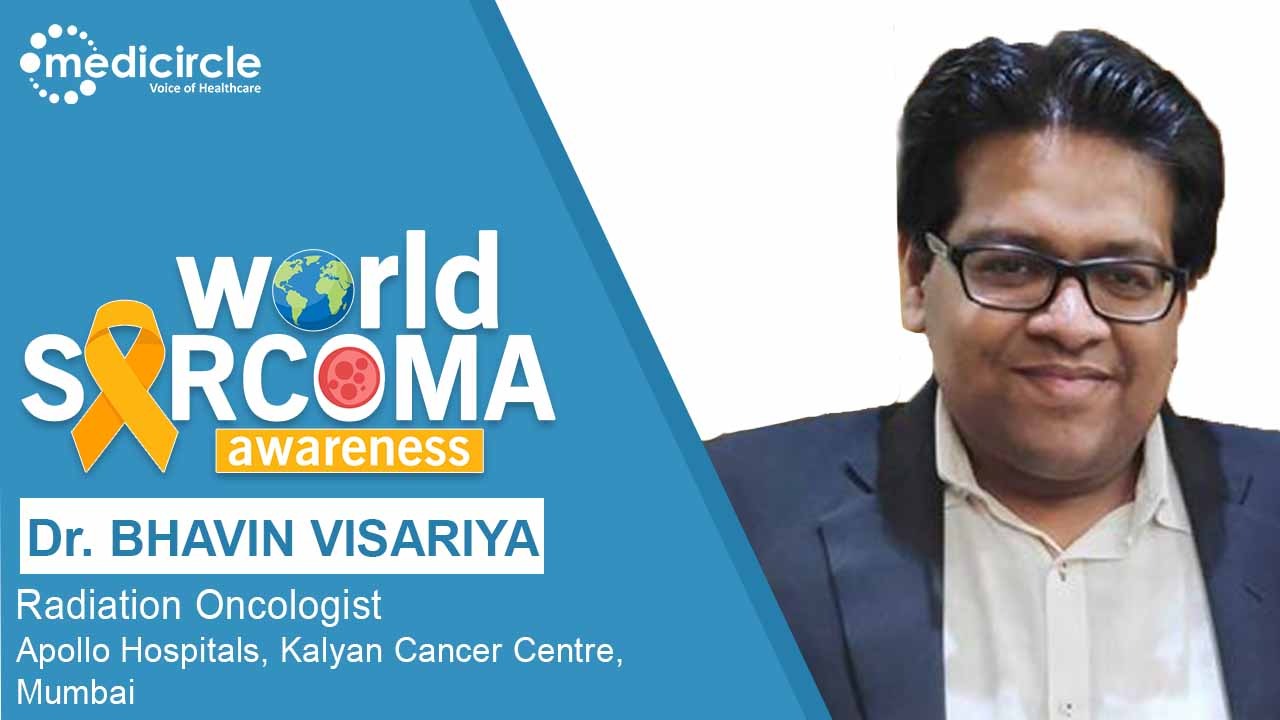 ▴ Sarcoma - its relation to obesity and age

Dr. Bhavin Visariya throws light upon whether obesity and age have a role to play in sarcoma incidences. He provides insight on what could be the probable causes of this rare form of cancer. He provides a general overview of the survival rates of cancer and signs and symptoms that people should be alert about.

Sarcoma is the general term for a broad group of cancers that begin in the bones and the soft tissues. Bone sarcomas are rare tumours, approximating 0.2% of all cancers. The common subtypes identified in India include Ewing sarcoma and synovial sarcoma. Soft tissue sarcoma forms in the tissues that connect, support, and surround other body structures. This includes muscle, fat, blood vessels, nerves, tendons, and the lining of the joints. It has an average 2.1% frequency rate in males and 1.2% in females. Treatment for sarcoma varies depending upon sarcoma type, location, and other factors. Medicircle is conducting an exclusive series to raise awareness about this rare medical condition by speaking to experts in the field.

Dr. Bhavin Visariya is a Radiation Oncologist trained in Tata Memorial Hospital, Mumbai. He has almost 10 years of experience in providing quality care to people suffering from cancer. He is well versed with all forms of modern radiation treatment techniques including Stereotactic surgery and brachytherapy. He is one of the few radiation therapists who have the expertise to treat patients through CyberKnife which is also known as robotic arm radiation treatment. He is associated with Apollo Hospitals, Navi Mumbai, HCG Cancer Centre, Churchgate and Kalyan Cancer Centre where most of the patients are treated free of cost.

Dr Bhavin, mentions. “If you ask for a brief answer, I would say “no, there is no connection between obesity and sarcoma”. However as per evidence-based information through trials and studies on this issue, there is a divided viewpoint on the same. 50% of trials and studies indicate that obese people might have slightly higher chances of developing sarcoma, whereas the rest of the 50% do not ascertain such a connection. One point to be noted in this regard is that obesity is not only a matter of concern as a cause of sarcoma, rather it plays a major role during the treatment as well. The most common treatment of sarcoma is surgery and in any surgery, comorbidity like obesity makes healing difficult for e.g.; if there is a surgical scar, it may take time to heal in obese people. Since obese people have other health issues like diabetes or hypertension, complications might aggravate due to this. Obese people have skin folds and hence during radiation therapy, there are more chances of side effects due to that. Hence I would say that there is no direct connection as such between obesity and sarcoma but obesity indicates treatment complications,” says he.

Dr Bhavin informs, “Sarcoma can be age-specific like Ewing's sarcoma and osteosarcoma are more common in children. Whereas, soft tissue, synovial sarcoma, liposarcoma,  peripheral sarcoma etc. are more common in adults. Treatment of sarcoma is also age-dependent. Children are primarily treated with chemotherapy. As adults are resistant to chemotherapy; they are mostly treated with surgery or radiation therapy. There is a small subset of people who suffer from familial sarcoma. They are generally younger in age. Depending on the age and other contributory factors, relevant precautionary advice and treatment are provided to patients.”

Dr. Bhavin emphasizes, “Sarcoma generally does not have a specific symptom. It’s a painless tumor. Extremity is mostly in hands and legs. Any kind of tumour should not be neglected and appropriate diagnosis and treatment should be done. In 99% of cases it would not be cancerous but it could be cancerous in 1% of the case as what I find in my personal experience. If the tumour is non-cancerous then delayed treatment is not detrimental to life but if it's cancerous then there should be prompt treatment of the same. For any cancer, early diagnosis is the key. Cure rate for stage 1 cancer is above 95%. In advance stages like stage 4, the cure rate drops to 5% or below.”

Dr. Bhavin explains, “Sarcoma has no specific trigger factor. There are multiple factors that contribute to the ailment. There could be genetic factors, environmental influences like different forms of pollution. It could be previous exposure to radiation. In the 1940s and 50s, TB was a very prevalent disease. At that time people used to undergo repeated X-rays which is a form of radiation. That is one example that could have triggered sarcoma during those times. Many people suffer from cancer in their childhood and undergo radiation therapy; again, that could lead to sarcoma later on.  Angiosarcoma is a type of sarcoma which is mostly caused due to previous radiation exposure. There could be exposure to chemicals as well that might cause sarcoma. So, there is not one strong factor, rather a combination of multiple factors that can cause this disease.”

The survival rate of sarcoma

He also emphasizes the need for regular health checkups as one advance in age as a preventive measure.