“Success stories of cancer survivors should be publicized for people to know that cancer is curable,” says Ruby Ahluwalia, Founder of Non-Profit Organization, Sanjeevani – Life Beyond Cancer 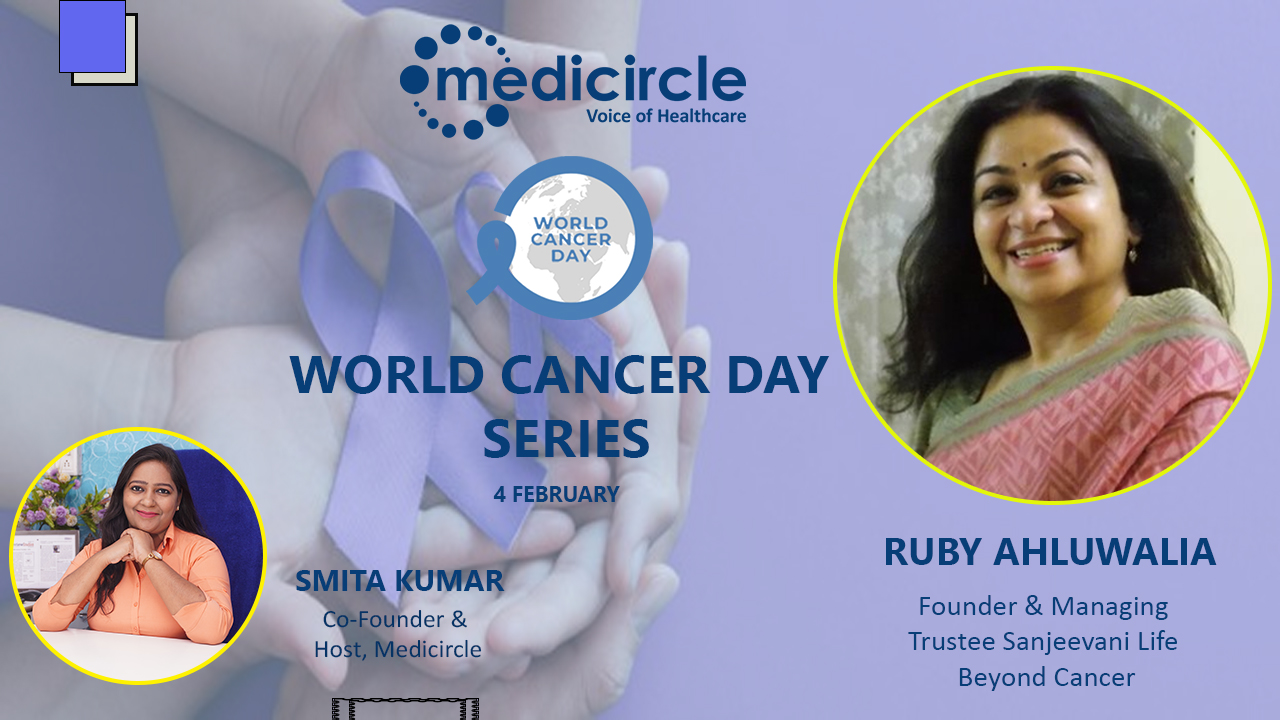 “Immunity should be consistently taken care of to avoid chronic diseases like cancer. People should know that they can be treated. They don't need to lead a sub-optimum life just because they have had cancer. Getting back to normal life is possible,” says Ruby Ahluwalia, Cancer-Survivor and Founder of Sanjeevani – Life Beyond Cancer.

According to WHO, cancer is the second leading cause of death globally and has been responsible for an estimated 9.6 million deaths in 2018. About 1 in 6 deaths is caused by cancer. Between 30% to 50% of cancer occurrences can be prevented by avoiding risk factors, by going for early detections, and implementing existing evidence-based prevention strategies. Medicircle is conducting an exclusive interview series on the occasion of World Cancer Day showcasing the opinions and guidance of eminent oncologists, social workers, and bureaucrats so that people get aware of causes, treatments, and myths related to cancer.

Ruby Ahluwalia is a bureaucrat, an author, and an experienced financial advisor with rich experience in project finance and public-private partnerships. She is the founder of “Sanjeevani - Life Beyond Cancer, which is a non-profit organization established for the prevention and eradication of cancer and for providing care counselling and rehabilitation to persons fighting from this disease especially in the underprivileged segments. Ruby was herself diagnosed with Triple Negative (Stage 3) Breast Cancer in 2009. She came out of it successfully.

Sanjeevani – Life Beyond Cancer is an award-winning registered Public Trust devoted to enriching the lives of cancer patients and raising the bar of cancer care in India. Since its inception in 2012, it has enriched the lives of over 2,45,000 patients.

Immunity is vital but the right concept of immunity is missing

Ruby adds lots of stress on the significance of immunity for good health. “People do not have the right concept of immunity. For them, immunity is having a lot of vitamin supplements and processed powders. They think that this is sufficient for boosting their immunity levels. However, there is much more to immunity than just taking these measures,” says Ruby.

Maintaining consistent immunity is an art

Ruby sheds light on the fact that the overall lifestyle and mental constructs play a vital role in keeping one’s immunity strong. She focuses on these aspects a lot in her sessions with the underprivileged cancer patients staying in the rural areas. She believes that to be able to maintain consistent immunity is an art.

Shed away the misconceptions

Ruby lists down the following myths related to cancer and emphasizes that the sooner we get out of such myths, the better:

“People think that cancer is not curable. Whenever we see someone who has been diagnosed with cancer, we think that he is on his way to death. This is a myth that works against the motivational levels of cancer patients. We need to see cancer as a normal disease that can be treated.  People particularly in the rural areas of our country believe that cancer is contagious. Even well-educated people believe this. They think that if we eat with a cancer patient or if we use the same washroom where a patient with chemotherapy is going, we might develop cancer. Such attitudes have a very negative impact on cancer patients. This is a big myth that needs to be busted.  People also think that cancer treatment is extremely expensive. This thought process is particularly prevalent in rural areas. As a result of this, they do not come forward for the treatment.  There are some side effects of cancer like people lose their hair or their energy levels drop down but after cure things start getting normal. It’s not that one will remain like that permanently,” says Ruby.

Ruby points out that “Cancer is proliferating due to bad lifestyle. This is bringing down our immunity levels. Due to this cancer cells get a chance to become aggressive and at some point in time they take the form of a tumor and take over our body”. She explains the following roadblocks of healthy living:

“The food that we are eating these days are either modified or have pesticides in them. It is difficult to get good nutrients from the food to restore our immunity levels. The air that we are breathing, the water that we are drinking are all extremely polluted.  Our stress levels are high. The way we think, the way we react; basically our mental constructs keep us in a state of anxiety. There is a strong mind and body connection. Hence whenever we are under stress, our body will get affected. Anxiety would increase toxicity in our system, and not allow the growth hormones to increase immunity in the body.  More than the water and air, our mental constructs harm our bodies. Why only cancer, so many other diseases like diabetes, arthritis, heart diseases or high blood pressure is largely proliferating. We need to alter the modern lifestyle for sensible and healthy living” emphasizes Ruby.

Cancer is a project, work successfully on it

Ruby who herself has successfully combated cancer, suggests “if cancer has come in life, it needs to be dealt with like a project. If you deal with it with determination, you can come out of it. It will then become just a thing of the past.”