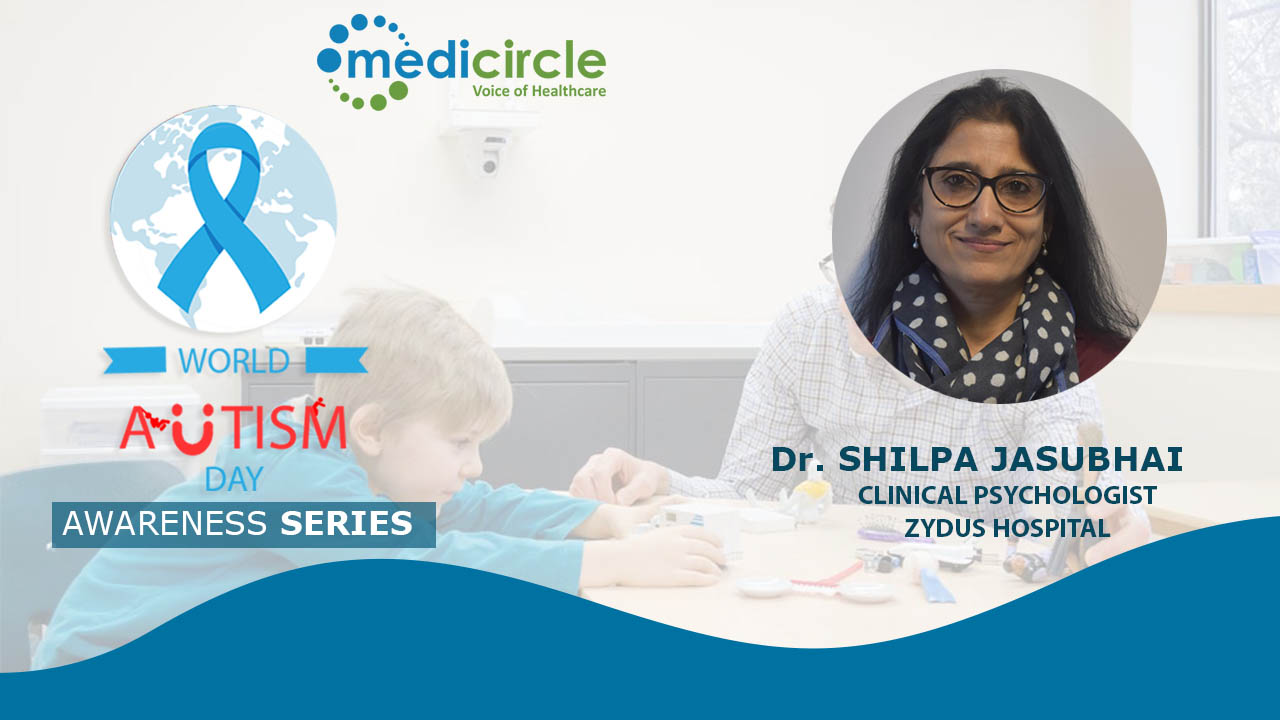 Children with Autism have something very particular or special in them like they may be good with numbers or good at solving puzzles. Parents and therapists need to find that special characteristic and enhance that skill - Dr. Shilpa Jasubhai, Clinical Psychologist.

Autism Spectrum Disorder refers to a broad range of conditions characterized by challenges with social skills, repetitive behaviors, speech, and nonverbal communication. Once considered rare, the current understanding of autism is that it is one of the most common developmental diseases. Medicircle presents the World Autism Day Awareness Series featuring eminent pediatric neurologists, special speech therapists, and clinical psychologists to build a better awareness of the signs, symptoms, and realities of autism.

Dr. Shilpa Jasubhai is a consultant clinical psychologist and independent researcher, who is currently affiliated with Zydus, Shalby, and AIMs hospitals, while also consulting Sandesh (press) and MICA in Ahmedabad, India. She has been practicing in the field for over 15 years and has completed her doctorate in 2007. Since then, she has actively deepened her knowledge in the field, getting certified in Brain Gym, Optimal learning, Vision Circle, Whole brain learning, Educational Psychology, In-Depth, Touch for Health, Neuro-Linguistic Programming, Hypnotherapy, Art therapy, Emotional Freedom technique, Quantum Focusing, Healing Affirmation, Reiki, Essentials of CBT and Access Consciousness. She has been contributing to the development of the field with several published papers and is a speaker in India and globally too. Recently she received an International leadership award as an innovative researcher from RULA in association with United World Counsel and United Medical Counsel and a "Remarkable Researcher award of the year" under, "ISSN GOLDEN RESEARCH PRIZE".

Dr. Shilpa explains, “Autism spectrum disorder is a developmental disorder, and it affects our nervous system and hinders the cognitive, emotional, social and physical growth of a child. According to the latest DSM five (Diagnostic and Statistical Manual of Mental Disorders, 5th edition), there are five subtypes of autism spectrum disorder. There are several developmental screening tests available in the market. I fundamentally use CARS, which is the Childhood Autism Rating Scale. It identifies a child with autism and determines the severity of the symptoms. But before going to a professional, there are certain early signs that parents can observe in their children and identify the disorder," says Dr. Shilpa.

She lists down the following early signs of autism in children:

If parents look into these typical early signs, they can help the child much earlier. The tests that I use to screen the child start from two years upwards. So, earlier you screen the child, the better,” advises Dr. Shilpa

Autism gets caused by a combination of genetic and environmental factors

Dr. Shilpa informs, “The cause of autism is not well understood, still, the researchers believe that it is a combination of genetic and environmental factors. A few of the causes could be:

There is no single treatment that fits all

Dr. Shilpa emphasizes, “Treatment for autism is an umbrella term because under that there are several therapies a child goes through. So, there is no one treatment or one therapy that fits all. It is structured or is designed based on the severity of the symptoms and needs of a child. So, there are a lot of centers in India that offer treatment depending upon the symptoms and the severity of the problem. Children with autism need many kinds of help like:

Research has shown that when the diagnosis is earlier or when an intervention starts earlier, it helps in reducing the symptoms and enhancing the abilities and skills so that the child can become independent.

The therapists focus on emotions and thoughts. So, the child learns to identify the thoughts which are causing the problematic emotions. By dealing with that they can handle their behavior also. Thought creates emotion and emotion creates thoughts. So, it's a vicious circle. Therapists help the child to focus on emotion so that the child learns how to deal with their emotions. They help them to restructure the thoughts.

It focuses more on the cognitive, physical, social, and motor skills of the child.

Through games and soft toys etc., the child is trained how to express and communicate with others and made to learn proper behavioral skills.

The child learns how to balance and strengthen oneself and how to maintain one’s posture. In autistic children, self-esteem is low. There is a lack of confidence. They don't look into their eyes, they prefer to look down and walk to avoid eye contact. Studies have shown in several children and even adults that there is improvement in self-esteem by just changing the posture. So, if you put your shoulders back and walk-up, your confidence level increases. Physical therapy develops all this along with motor skills.

It is believed that the children don't receive the nutrition that they need for growth and development, because they prefer to eat certain kinds of food and they are very stubborn if they don't get that. They throw tantrums. So, avoid preservatives or any artificial colors or artificial sweeteners as they activate the brain cells. Hyperactive and attention problems would get better. This will help in reducing aggressive behavior in a child.

Recent studies have shown that giving them a gluten-free vegan diet also helps in reducing the symptoms and behavioral problems. So normally give them a lot of poultry. They need to drink a lot of water. A lot of vegetables and fruits and food rich in omega3 fatty acid is also required to be given so that they get a proper diet.

Speech therapy helps them to improve their language. They need to work on the sound and how words are spoken as until the age of 5 years, they don’t talk. They only point fingers at objects and communicate with signs.

The professionals help parents so that they can continue giving the training to the autistic child at home and are better able to handle the child.

There is no medicine to cure autism. Healthcare professionals give medications for basically symptoms or unwanted behaviors. A lot of times children with autism have convulsions, they have epilepsy attacks so they are given anticonvulsive drugs. They are very hyperactive, and they might have obsessive-compulsive behavior also. So they are given supplements for that. They may have anxiety so they are given anti-anxiety drugs,” explains Dr. Shilpa.

Dr. Shilpa mentions, “They have something very particular or special in them, which the parent or the therapist needs to find out so that they can enhance that skill in the child. Sometimes they are very good with numbers, sometimes they are good at solving puzzles. There is a nervous system problem. There is a developmental issue due to which certain areas of the brain create hindrance in doing particular tasks. But since they are good at certain skills. The fundamental thing to do for the parents is to accept the child, identify their special abilities and work upon areas they are good at," advises Dr. Shilpa.

Parents should try to be calm and understand the child

Dr. Shilpa points out, “Children with autism normally have aggressive behaviors and maladaptive or self-injurious behavior. They don't know how to express themselves, they don't know how to speak out their needs and their wants. So the first thing the parents need to do is to understand how well the child is communicating. And then observe what the child is trying to tell them by behaving aggressively. So first thing they need to do is stay calm and observe the child and find out what is triggering the aggressive behavior of the child. Maintain a diary for a week or two weeks and note down the triggers and what happened before and after each episode of aggressive behavior because the child doesn't know how to express and if there is nobody to listen or understand, they become aggressive. So, if parents identify their problem by keeping on observing the child, they will be able to reduce the aggressive behavior. When parents are not able to handle it, they should approach the professionals,” advises Dr. Shilpa.