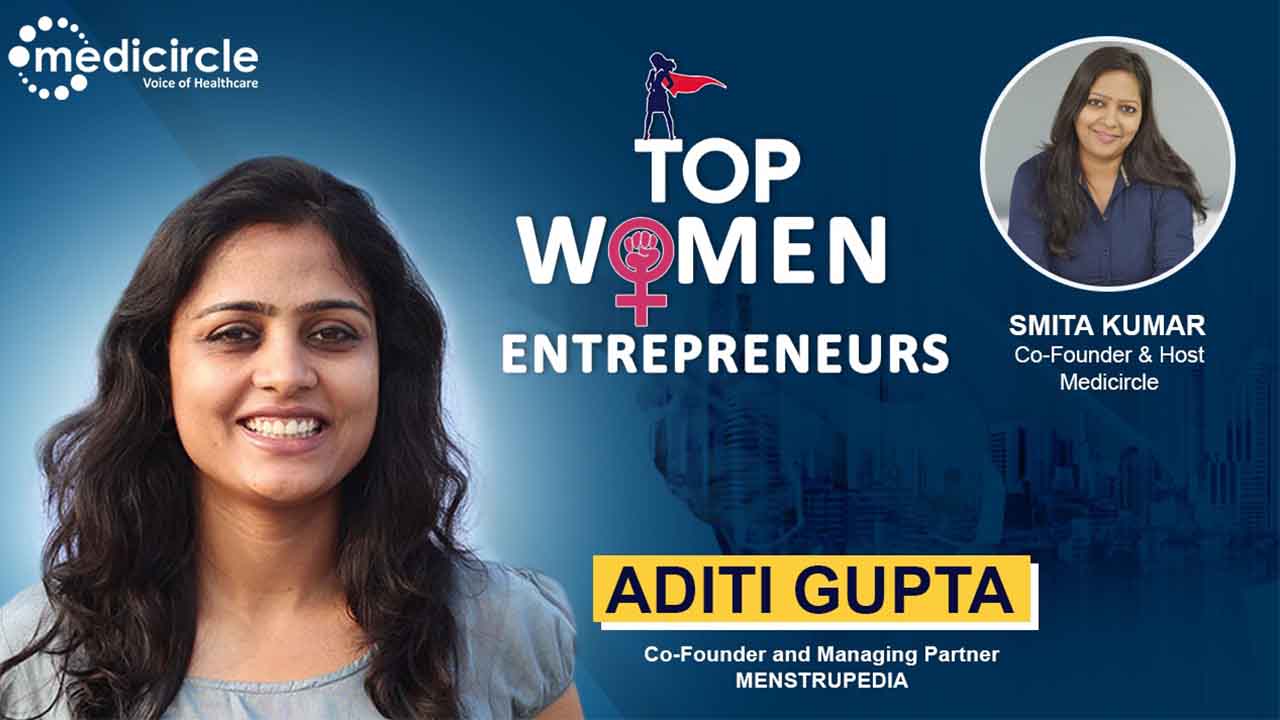 Aditi Gupta, Co-Founder and Managing Partner of Menstrupedia; a friendly guide to periods talks about the idea behind this significant social venture, sex education of both genders at the time of puberty, the need to break silence around menstruation and policies around menstrual hygiene management in an interaction with Medicircle.

Successful healthcare and social entrepreneurs are making valuable contributions to the economy. Medicircle presents a series on the top achievers of the healthcare industry to showcase the contribution of these influential role models and to bring forward their views about the future of the Indian healthcare ecosystem.

Aditi Gupta is the Co-Founder and Managing Partner of Menstrupedia. It's the brainchild of Aditi as well as Tuhin Paul who is her husband with whom she fell in love during her college days. The couple ensures that Menstrupedia is crafted to present the information about menstruation in a way that is not only easy to understand but also sensitive towards the taboo nature of the subject. She and her husband are both National Institute of Design Alumni, who co-founded Menstrupedia Comic in 2012. In 2014, she was in the Forbes India 30 Under 30 2014 list.

Menstrupedia is a friendly guide to periods that helps girls and women to stay healthy and active during their periods. With a team of dynamic and passionate people with complementary skills, Menstrupedia aims at delivering informative and entertaining content through different media. Menstrupedia is a definitive step to shatter the myths and misunderstandings surrounding menstruation for ages. This initiative has become extremely popular in different countries with an encouraging user base. Apart from educational institutions, it is being used by NGOs like Protsahan, Munshi Jagannath Bhagwan Smriti Sansthan, Instincts, Kanha along with two Buddhist monasteries in Ladakh.

Aditi narrates, “Menstrupedia is a wonderful platform that has created a community opposite to the society where nobody wanted to talk about menstruation and problems related to it. I started Menstrupedia because of my own experience of facing the taboo. Both Tuhin and I represent Menstrupedia. It’s as much Tuhin’s brainchild as it is mine.

I grew with a lot of taboos around menstruation and was considered impure during my periods and I grew up looking at my body as impure. While Tuhin grew up in an environment where menstruation was kept a secret from the boys. Though he had a faint idea of it through the school curriculum but he was under the impression that it is a one-time phenomenon. When he came to know from me about how big a deal it is in our society and different rules and regulations followed in homes for menstruating women, it was an eye-opener for him. Since we were studying communication design at that particular moment, we together decided to take it up as an issue to build communication around. We realized that there was so much basic information about menstruation that young boys and girls including us were just not aware of. We did a year of extensive research, went to schools, spoke to parents to understand their perspectives, and then created the prototype of the Menstrupedia comic after understanding the whole scenario. Now, Menstrupedia has been doing amazingly well. Apart from India, it is locally published in 5 different countries and we have signed a deal with 3 more countries. Apart from India, girls and boys of 8 different countries learn about menstruation and problems related to it through Menstrupedia. It is being used in 10, 000 schools in India with 5-6 million user bases across 18 languages,” says Aditi.

Aditi points out, “Sex education in India is in a complete mess. We end up raising our girls with shame and boys with ignorance. There is a huge gap. Before menstrupedia 5-6 years back, girls did not have much of a reference point about puberty and issues related to it like menstruation. Menstrupedia bridged this gap to a large extent. Gulu is an initiative in the same arena for boys. Adolescent boys would get a reference point on masturbation, addiction, consent of the other gender, cyberbullying, and how to behave with girls in general and that masculinity is not based on the size of your penis. We should have sensitive men in our society. To have sensitive men in our society, we need to raise sensitive boys. We stereotype them as parents or society. We need to work with boys in formative years and teach them about their physicality and emotions because growing up is a complex phase. Parents do not tell boys and girls about puberty issues because it was exactly how they were raised. This requires to be changed.”

Just like girls are growing up reading Menstrupedia, boys will grow up reading Gulu

Aditi emphasizes, “The best way to raise a sensitive society is to raise boys right. The conversation is happening about what is the definition of masculinity but that is happening with adults or a little older group and in online platforms mostly. Online mode is for a certain segment of society but not for the whole society. Gulu is being published in all major Indian languages and will go to the interior part of India as well, reaching a large segment of the society. Before its publication, hundreds of parents have already gone through it and confirmed that it’s not culturally embarrassing. Just like Menstrupedia, Gulu will be initiating icebreaking moments in Indian families. Just like girls are growing up reading Menstrupedia, boys will grow up reading Gulu,” says Aditi.

Need for breaking the silence around menstruation

Aditi mentions, “Menstruation is taboo. We are breaking that and breaking silence around the subject. Though popular culture has done that but on a surface level only. There are so many things that need to come together to curb this taboo. This taboo has serious implications on the economy. 1.2 crore girls get periods in India. There is non-availability of toilets or hygienic-sanitary supplies and that is why they are dropping out of school. 23% of labour workforce participation ratio has reduced since 2004. Leakage in this regard starts from the stage of puberty and having an impact on the economy and place of women. Women and girls do not talk about the natural processes of their bodies and naturally do not talk about violence meted out to their bodies.

Women can respect beliefs without considering themselves impure

Aditi points out, “In most of the houses, there is discrimination against daughters by treating them as impure during menstruation. Women should participate in constraints related to religious practices during menstruation with the outlook that “I respect your belief system but I do not consider myself impure.” The belief system of impurity is a kind of control mechanism for women. In the South Asian region, this concept is very popular and this is the region where female goddesses are worshipped a lot. Menstruation and related issues like sexuality remain largely unspoken in both genders. This requires change.”

Aditi mentions, “Menstrual hygiene is a big factor that is not happening. Wrong data is being floated by some companies doing surveys in this regard. If we see data of our home ministry and women and family development ministry, we find that 50 % of women of urban areas and 40 -45% of women of rural areas have access to hygienic ways of managing their period.

As of now just free distribution of sanitary pad campaigns is going on and initiatives to control anemia by providing iron tablets are taking place. Menstrual healthcare is not understood in our country. Health issues like PCOS, PCOD, endometriosis, etc. are common these days due to the environment and changes in work and life situations. Problems like endometriosis take time to get detected. There is a loophole for friendly gynecologists. Though the scenario has changed in the past few years with gynecologists debunking myths on their Instagram handles etc., it’s a judgmental space for young girls still and they are fearful to go to gynecologists. This situation should get changed. Also, we need to have basic support for conditions like anemia, UTI, etc.

The government has created a technical advisory group for menstruation hygiene management. But there haven’t been many meetings etc. in this regard as of now. As far a policy of menstrual hygiene management is concerned, basic things like the distribution of sanitary napkins are going on. If they start to establish awareness or education programs in schools, doctors are also called to be there to spread awareness and it takes the shape of anemia awareness and provision of iron supplements, etc., Periods related issues remain unaddressed.”

Menstrual leave policy is showing regard to a woman’s body

Aditi says, “There is a menstrual leave controversy that is going on. Women themselves are ironically not supportive about it fearing problems in employability. But it should be understood by organizations that it's really difficult for many women to work during those days. Many companies have a menstrual leave policy. It's kind of showing regard to the issues faced by women. Many independent companies like Menstrupedia, Blush, Zomato etc. provide it. The Bihar government was the oldest one to do this in some sectors. There is a requirement of this policy to come into force at a larger scale as part of showing regard towards women’s bodies and their problems,” emphasizes Aditi.

You can hear Aditi and Tuhin speak about their initiative, Menstrupedia at: