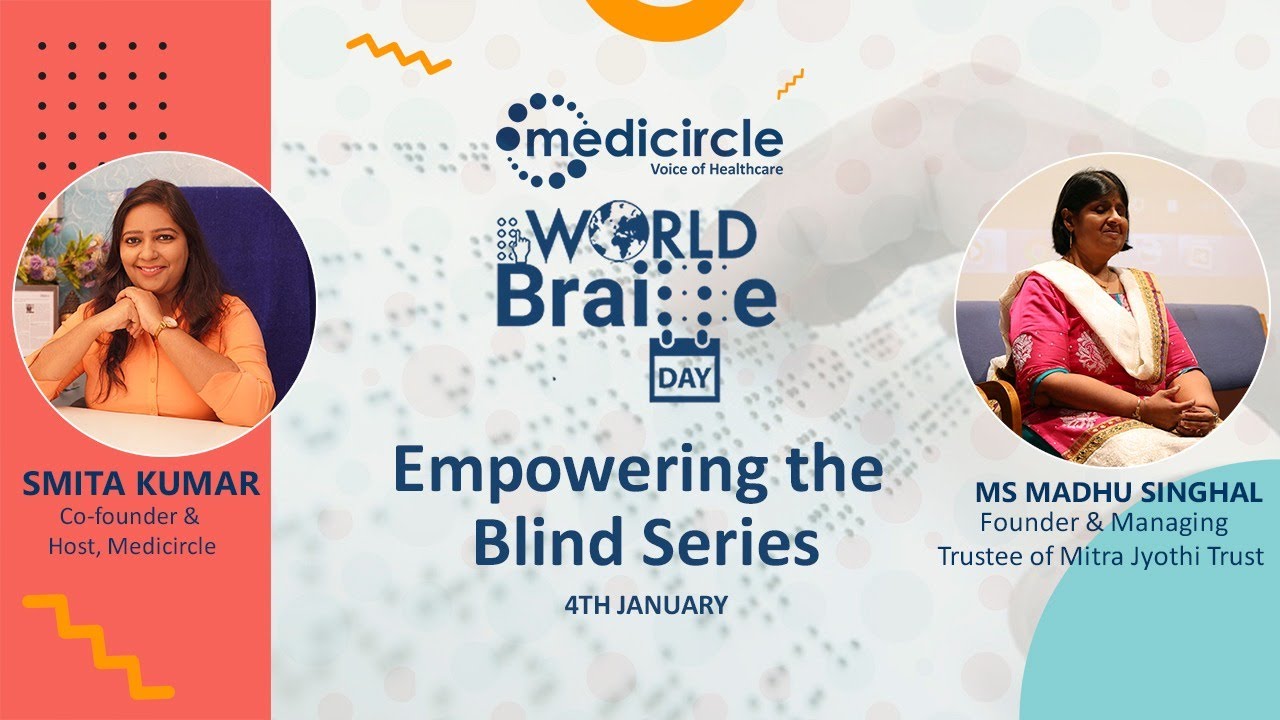 “When a child goes to the school, the first thing we will give them is pen and paper or pencil and paper to write, same is with Braille, it’s importance cannot be forgotten,” says Madhu Singhal, Managing Trustee, Mitra Jyothi.

At Medicircle we are conducting the Empowering the blind series on the occasion of World Braille Day. We feel braille is not just a code but a source for the empowerment of the Blind. Through our Empowering the blind series we aim to create awareness about the situation of the visually impaired population in India and highlight individual and organizations actions that strive to create a world full of possibilities for the visually impaired.

Madhu Singhal, Managing Trustee, Mitra Jyothi, is born and brought up in Haryana and has completed her post-graduation in Hindustani classical music. She has been running Mitra Jyoti, for the last 30 years with a mission to educate and empower the visually impaired. She has done training in trekking for the visually impaired from the Himalayan Mountaineering Institute, Darjeeling.

Madhu shares her views, “I personally feel that when we talk about India having the second largest population of the blind, we are not getting the correct data, if we go to the remote areas, a lot of people are uncounted. When we talk about making them Atma Nirbhar, there are so many ways yet it is a very big question, but nothing is impossible. It can be possible by making schemes by the Government of India, state governments, society, public and parents group and the person themselves can be made self-reliant. Even the NGOs like Mitra Jyothi have a lot of programs and series, where we are trying to make them Atma Nirbhar by giving them education, providing them the books to educate themselves then later to give them that reading to enable them to be able for everything and the third thing, is to search job opportunities for the persons with visual impairment. But definitely, it is the duty of all of us, whether the government, nongovernment, NGOs, parents, and also the visually impaired themselves to together make this thing possible,” she says.

Braille is Braille, its importance cannot be forgotten

Madhu shares her opinion on whether technology replaces Braille, “First of all, I would like to salute our Louis Braille the person who has invented the Braille script for all of us.  Without Braille, we would be just sitting in one corner of the house without reading and writing and not come out. So, it was a great work by Louis Braille, which has provided this script for all of us.  Now, Braille definitely cannot be digitalized because Braille is Braille. When a child goes to school, the first thing we will give them is a pen and paper or pencil and paper to write, same is with Braille, it’s importance cannot be forgotten. Yet, technology has made Braille possible, because of the technology, people have been able to achieve in life and go to the highest level, some have become IAS officers, some have been able to seek jobs at the best companies and are in a higher position. Visually challenged people can do quite a lot of things,” she says.

Madhu sheds light on the subject, “When a child is born with a visual impairment, it itself is a very big challenge, the family undergoes a very big trauma. A stigma gets attached with a child, that this child is blind; this stigma is from the beginning. Another type of humiliation is when the child goes to school. The stigma is getting the admission in the school, later somehow they complete their education, next is the placement or employment opportunity, how will this blind person do the work? If they get employed then the colleagues or their boss undermine their abilities, which is another stigma. Though they have a lot of abilities to show to the people, multiple stigmas are attached from birth. There are many ways we can remove this stigma if we can give them correct kind of opportunities to come up in life by the family or society again, provide training like computer training to make them able to go for the job opportunities, to make them able to read books and complete their education, reach to the level where they want to reach, which is not impossible,” she says.

Policies for the visually impaired or other disabled