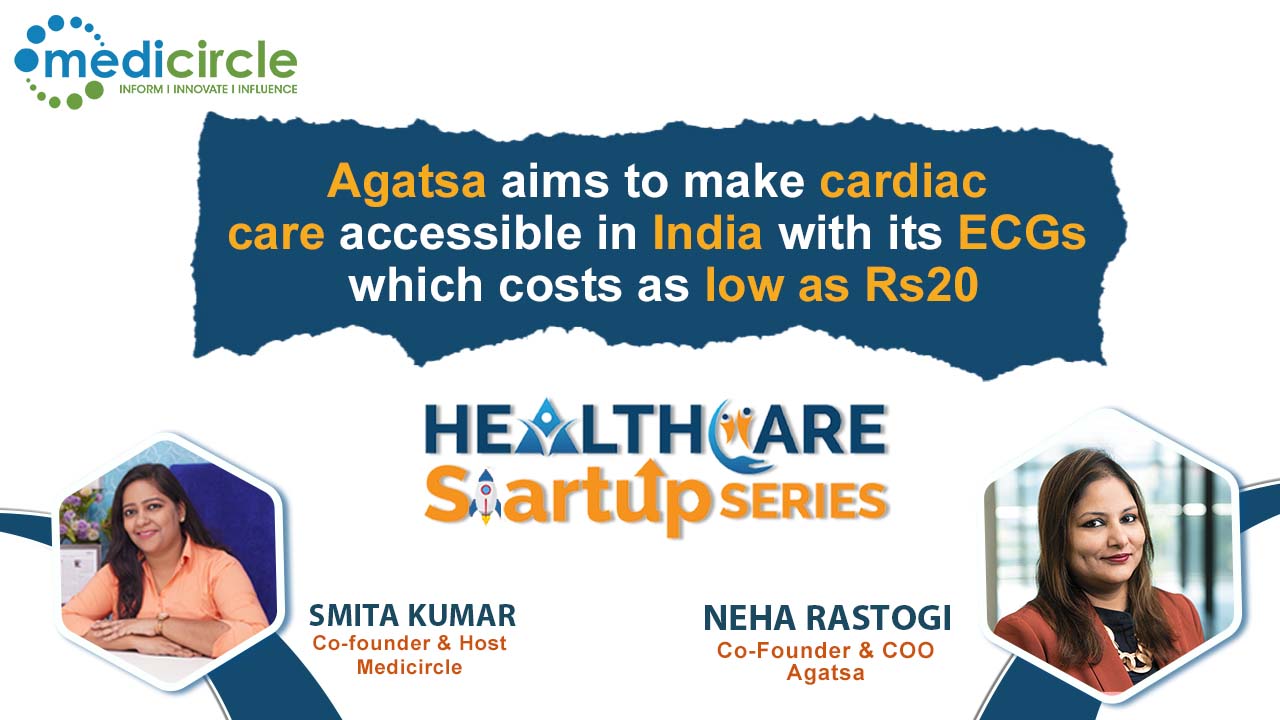 12 Lead of ECG which is a doctor-grade ECG process can be done with just a touch. People leaving us and going at a very young age is why heart health should be taken seriously. Agatsa has come up with a revolutionary plan for monitoring health care in an affordable way for rural and urban areas both.

The global diagnostic electrocardiograph market is expected to reach USD 10.3 billion by 2024 from USD 7.5 billion in 2019, at a CAGR of 6.4% during the forecast period. Some studies suggest that the risk of cardiovascular problems, such as a heart attack or stroke, remains high even many months after a SARS-CoV-2 infection clears up.

Agatsa started in the year 2010. In 2013, Neha Rastogi, the Co-Founder & COO of Agatsa got the shocking news that her father-in-law had a cardiac problem. With a helping hand approach towards him, Neha Rastogi wanted to give him a device for usually checking his heart health by himself but unfortunately, back then there was nothing available at that point of time. Recently everything was getting digitalized, smartphones were getting invented, everything was becoming pocket friendly.

Neha Rastogi, the Co-Founder & COO states “The main objective was to make a portable device for heart health . Ecg is the first test to be done for finding out any problem in the heart. We wanted to ease out the whole ECG process as traditionally it was only done in big hospitals with big bulky machines. There was no means to do it at their home and all by themselves with all the more accurate results. That is how the idea was born there and after the Research and Development, it took around 2 to 3 years to come up with the pocket size,12 lead ECG device called Sanketlife.”

Connects to the phone wirelessly and transmits data to the cloud wirelessly. Sanketlife is connected with the mobile application, allowing the doctor to access the report file. The doctor can then review the report and then advise the patient accordingly. Most importantly it keeps a backup of all the reports. Traditionally there was no system, but there were only paper reports given out and now everything can be digitalized due to Sanketlife.

Females are prone to cardiac diseases just as much as men. There is no age-specific age criteria for cardiac arrest. Even age groups of 25-30 years are getting cardiac arrest which is an eye opener for the people in the world to keep checking on their heart health. There is a dire need for tools to monitor heart health for both genders. Cardiac diseases are prevalent in rural and urban areas both. Heart rate is just one parameter, an individual needs to have a piece of detailed information which is provided by Sanketlife. People need to be serious about their heart health and keep monitoring it so that they can take an action on time.

80-85% of lives can be saved if there is no time delay in reaching the hospital. Delay happens due to the delay in early diagnosis which can result in major complications. Anybody can monitor, diagnose and send it to the doctor for reviewing it. Doctor can then give the needful advice and thus multiple lives can be saved.

Funds raised and utilization by Agatsa

Funds are being utilized for the scale-up of Agasta. They are constantly researching and developing new products to cover all topics in general health such as diabetes.

Agatsa initially started selling on e-commerce platforms. They are Planning to set up a manufacturing unit in South India. It will be a manufacturing and marketing office. Along with selling direct to customers, they are also integrating their products with different businesses. They are soon going to launch their products globally as well because their FDA is going to approve them very soon. Once they get their FDA approval from the United States, they then are going to sell in the U.S markets. They also are going to expand widely in other markets in the world as well.

Neha Rastogi, the Co-Founder & COO of Agatsa states “The designing and manufacturing of Sanketlife is entirely done in India. So that is why we can control the cost of our product making it affordable. Our products start as low as 2,500 INR and go maximum upto 10,000 INR which is comparatively cheaper than a smartwatch. One device can be used for the entire family. When an individual purchases an ECG device from Agatsa, Per ECG cost can be as low as RS20. Hence, it is very affordable for urban as well as rural areas. Additionally, it helps in saving ample time as well.”

Feeling of changing lives will help an entrepreneur be motivated. Taking 1 step at a time is the way to go. There is a lot of work to do and learn so if the intent is right you will win.

Doctors are able to look and cater to multiple patients effectively due to Sanketlife. Sanketlife will help in touching many lives as doctors can manage multiple patients efficiently. If an individual is monitoring their heart health in addition to the clinician's advice as well, the Longevity of the Indian population is bound to increase as there are many patients suffering from CVD cases.