Behaviors of people suffering from DID are projected in more exaggerated form in movies than what exists in reality emphasizes Ketaki Gokhale, Clinical Psychologist 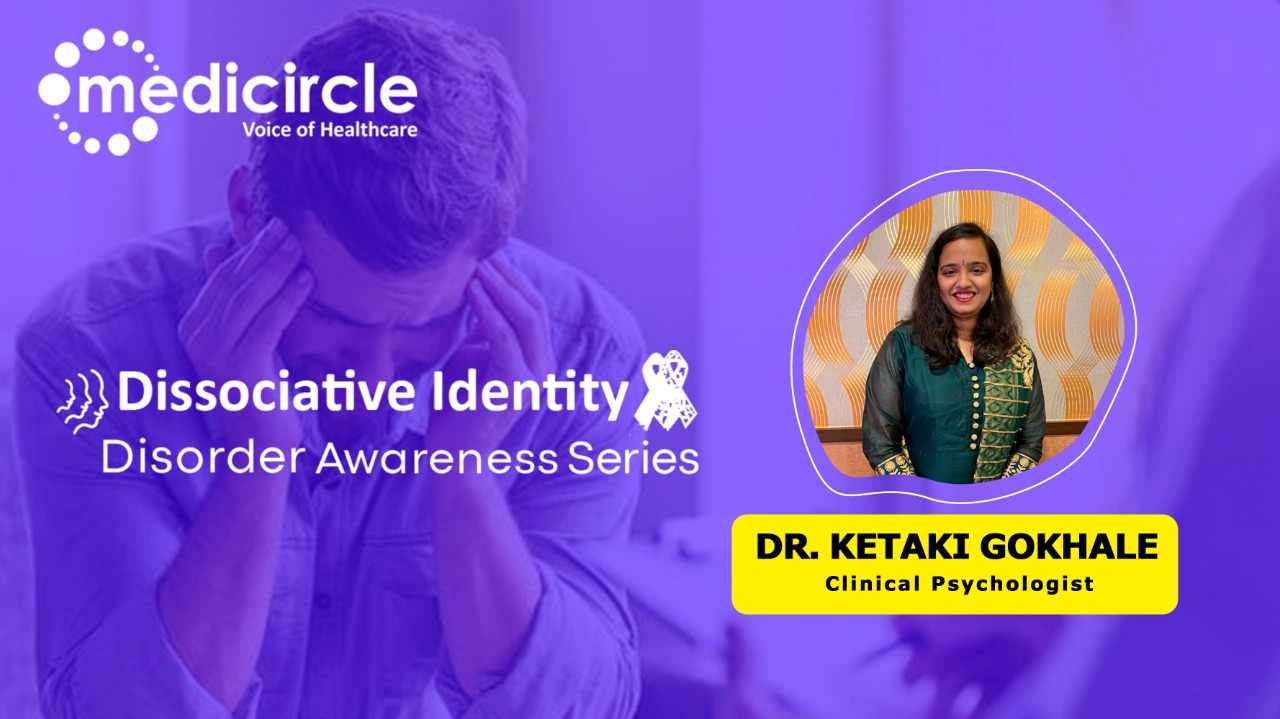 Ketaki Gokhale, Clinical Psychologist provides insight on behavior therapy and DID, strategies that can be utilized to prevent it, and how friends, family, and society at large can play a vital role in lending support to people suffering from the disorder.

Dissociative identity disorder was formerly called multiple personality disorder. It often goes unnoticed among the general population. Those who suffer from this disorder lead a terrifying and disturbing life. Dissociative Identity Disorder Awareness Day is observed each year in March. It aims to spread awareness about the existence of this disorder and create understanding and compassion towards the people who are going through it. Medicircle is conducting an exclusive series on Dissociative Identity Disorder so that the people can understand what the disorder is directly from the experts.

Ketaki Gokhale is a mental health professional with a Master's in Clinical Psychology. She is trained in Primary and Advanced RECBT from Albert Ellis Institute, New York, and is also a certified positive Psychology Coach from Inspiring Evolution. She has been working with kids with special needs and has devised interventions to boost their academic, social, and behavioral development. She performs therapy sessions and psychological assessments, as well as conducts workshops on stress management, anger management, time management, substance abuse, and digital addiction for all age groups.

Ketaki explains, “DID is a disorder that creates a lot of turbulence in a person's mind because one sees a completely different self. Two different personalities are residing inside that person and the person finds it difficult to understand what is happening to him/her. There is no 100% guaranteed cure for this particular disorder but I feel that a certain amount of behavior therapy would help a person to at least, lessen the frequency of the symptoms. Just as there are certain other disorders that have no permanent cure and where only the frequency or intensity of the symptoms can be reduced, similarly, in DID through behavior therapy and talk therapy, the thoughts can be taken out and the individual is made to understand the differences in the two behaviors. So, behavior therapy is one of the ideal ways where we can help a person to know what is happening with him or her and help him out,” Ketaki says.

Ketaki emphasizes, “DID can happen to anyone and there are no such steps that can help a person to prevent this disorder. It is unpredictable. It might happen that a person sitting right next to me might be suffering from schizophrenia, I might not be knowing that or the person himself might not be knowing that. Similar is the case with DID. Since the roots of DID are in the psychological trauma one goes through probably in childhood or teenage years, we can make children and youngsters more aware and teach them the difference between what is right and what is wrong. And if there is any kind of traumatic experience in their life or if they can perceive a probable danger their mind would always be prepared, because our mind can be trained and is one of our strongest friends. That is the way out, you train and prepare your mind for the worst. So, whenever we face a dangerous situation, we will never consider ourselves feeling weak because our mind is already prepared for that,” advises Ketaki.

As Projected in Blockbusters, People Suffering from DID are not Harmful

Ketaki informs, “There has been some kind of misconceptions in society due to which it is presented in an exaggerated form in movies. The protagonist suffering from DID is projected to be very harmful to other people. In real life, this is not the case. As soon as mental health professionals come across such people, they try to reduce the symptoms as much as possible. However, some people by personality are aggressive and if there is a trauma in such people’s lives which have arisen from a very dangerous fight and he/she is suffering from DID due to that, the impact of that circumstance might make the individual try to retaliate or display some violent behavior. But then it's just a game of mind. They might get angry or show some amount of violence, but cannot be harmful to the extent as shown in movies,” informs Ketaki.

Ketaki suggests, “We need to listen to them because patience is all that is required. So, I feel that the people who have already been diagnosed or who are suggestive of suffering from DID, need a patient ear. We need to respond rather than react to them because that is something that would make them aware that there is something wrong. Or maybe there is something that has occurred in the period of memory loss which probably was not appropriate. So, in the whole process, I feel that creating awareness is what is required so that our society can deal with such persons respectfully.”

Ketaki explains, “DID triggers memory loss, there is depersonalization which happens when one gets detached from reality and becomes a person he does not know and hence unable to control it. Some amount of medications and therapy is needed which does bring about improvements in the condition. I wouldn't say 100% improvement, but there is an improvement to an extent where the person starts realizing that something is amiss. So, I feel it’s all about having an immense amount of patience to handle people who have been diagnosed with DID,” says Ketaki.

Society Should Do Away with the Stigma

Ketaki says, “There is a stigma attached to such psychological conditions and hence the person or family members keep such tendencies hidden instead of going for professional help. There is still a thought process in our society that going to mental health professionals indicates that the person is crazy. However, gradually people have started lifting up the stigma and it is the right time to have more awareness programs to further eradicate it.”