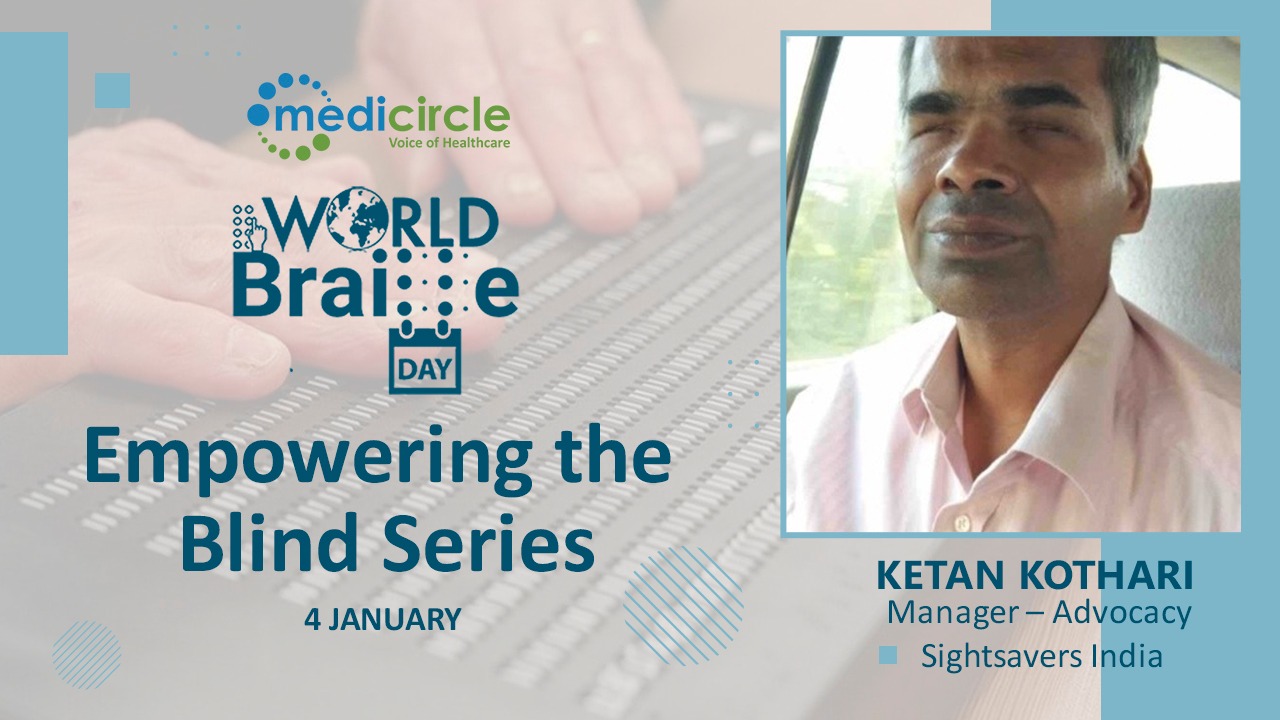 “In a country like ours, not everybody is computer literate or English literature and not everyone can afford technology,” says Ketan Kothari, Manager – Advocacy, Sightsavers India.

At Medicircle we are conducting the Empowering the blind series on the occasion of World Braille Day. We feel braille is not just a code but a source for the empowerment of the Blind. Through our Empowering the blind series we aim to create awareness about the situation of the visually impaired population in India and highlight individual and organizations actions that strive to create a world full of possibilities for the visually impaired.

Ketan Kothari, Manager – Advocacy, Sightsavers India, has 20 years of professional experience and has worked in the area of disability rights and health for marginalized people. He has also been an assistant director at National Association for the Blind (NAB) and manager at Braille press.

India home to the largest number of blind

Ketan shares his views on India being the second most popular country in the world and home to over 20% of the world's blind population, “If accessibility is improved, the blind and all the disabled would become independent and self-dependent,” he says.

Braille can be complemented by technology

Ketan speaks on the topic of can technology replace Braille, “In a country like ours, not everybody is computer literate or English literate and not everyone can afford the technology. Even when we teach children using a mobile phone but they are not able to write, they are talking to Google and getting their answers, so the concept of reading and writing especially in rural areas, as of today is only Braille. So I don't see why Braille needs to be replaced by technology? But I definitely do feel that Braille can be complemented by technology. Because when normally sighted people use computers, they read and write, whereas when a blind person uses a computer, they write and listen, not read, so how is he going to know how the word ‘knowledge’ is spelled? So in my opinion, both have their own places, Braille is here to survive for another couple of decades, and now we have got refreshable Braille displays, which is a very good mixture of technology and Braille,” he says

Inaccessibility is the major challenge

Ketan sheds light on the subject of challenges faced by the blind or partially blind individuals in India, “There are plenty of challenges the moment they go out - the inaccessibility of roads, inaccessibility of public places (according to the definition of public places given in the law), inaccessible government websites. So the lives of the blind and partially sighted are extremely challenging,” he says.

Ketan speaks on whether Indian Health Care policies are enough for the people with vision disabilities, “Not really. People with disabilities, irrespective of their income should have been covered in our Prime Minister's insurance scheme that has been launched, Swastha Bharat. But our systems are not ready, when I visited one of the best five-star hospitals in Mumbai, I found that nobody was able or willing to help me. Fortunately, I had my father with me, who took me from one place to another, ideally, what should have happened is, when a person with a disability comes to your reception desk, there should be a person who could take him or her wherever he or she needs to go because as it is these hospitals are charging huge fees, they're not giving any concessions, so it should be a mandate upon them to give these facilities to people who are disabled, whether they are blind or partially sighted or disabled. Also the medicines, their names are not written in an accessible format, so we cannot really identify medicines or understand the names, the medicines have barcodes but can everybody have a barcode reader? This is where Braille helps, but the tragedy is, the European countries and America get their medicine labels printed in Braille in India, but when the same companies launched themselves in India, they do not provide Braille in India except for Savlon. I would also blame the policymakers, instead of giving very euphemistic names, which are very good to listen to, if the policy environment improves, then we won't need those euphemistic names. I personally don't mind myself being called as a person with a disability or a person with blindness but, what I'd certainly mind is that things are not accessible,” he says.