Close to 70% of the medical conditions don't even require people to travel to doctors says Saurabh Satija, Founder and CEO of CureAssist 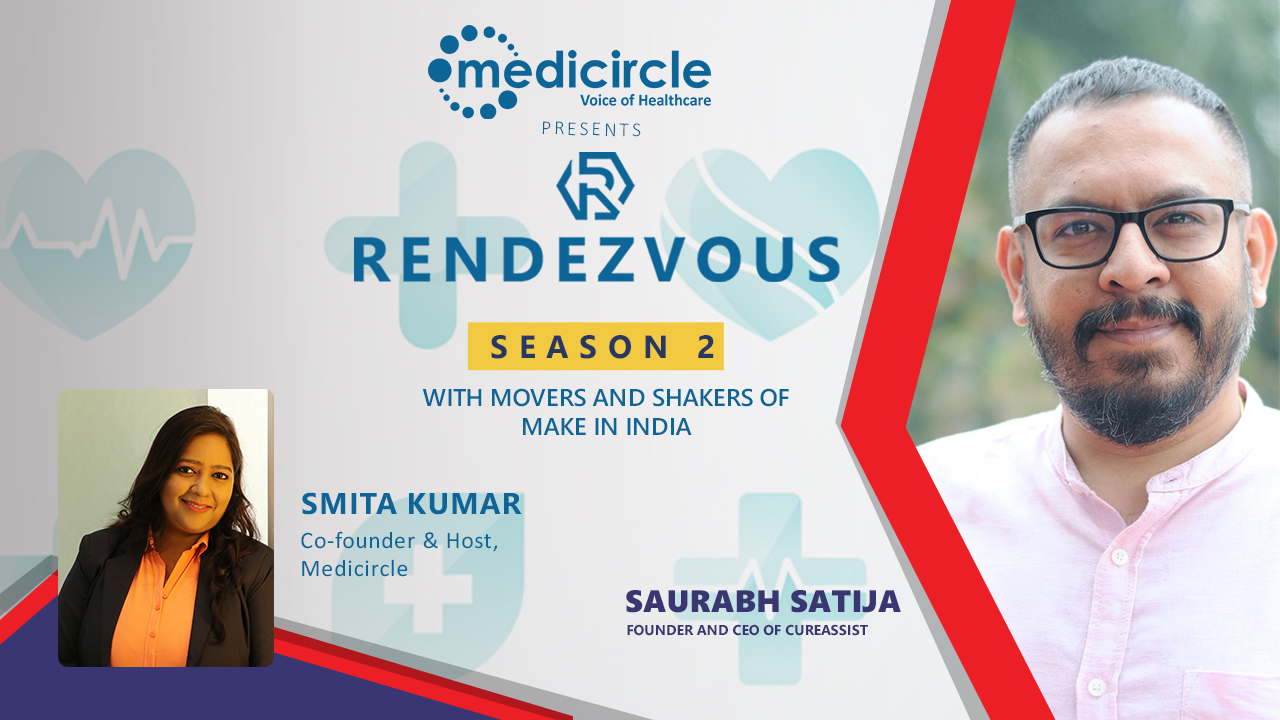 “Research has shown that close to 70% of the medical conditions do not even require the person to actually travel to the doctor for a physical examination. And that is where CureAssist plays a part,” says Saurabh Satija, Founder and CEO of CureAssist.

Artificial Intelligence has countless applications in healthcare such as finding new links between genetic codes or to drive surgery-assisting robots. Artificial intelligence is reinventing and reinvigorating modern healthcare through machines that can predict, comprehend, learn, and act thus making healthcare accessible and affordable to the remotest of areas.

Saurabh Satija, Founder and CEO of CureAssist, who has 12 years of Brand Management & Marketing experience and is passionate about innovation, branding & technology, enabled products which led to him being 2x startup founder.

Saurabh throws light on the subject, “CureAssist is a mobile application which consists of an AI-powered symptom checker bot with which a user can assess basic symptoms and once the assessment is done, the system automatically curates a host of doctors with whom this user can then get into a video consultation or a teleconsultation depending on the need, which the user has. In India, we have one doctor for every 2200 patients. So there is a huge demand and supply gap which we see in the country. It is even more predominant when it comes to specialist doctors, where people generally think that specialist doctors are the way to go. But they are also very small numbers and the supply is very short. In addition, research after research has shown that close to 70% of the medical conditions do not even require the person to actually travel to the doctor for a physical examination. And that is where CureAssist plays a part. So use the power of AI to give the user an understanding of what his or her symptom entails. And based on that assessment, give them the power or curate a set of doctors with whom this person can then come into a teleconsultation or video consultation. That’s the core of the product. In addition, we are also aggregating a host of other ancillary healthcare services. Whether the user has a full-stack experience when it comes to healthcare, so access to diagnostic labs, pharmacies, or any preventive care solutions, which are based on the tenets of Ayurveda, homeopathy, etc. So we are providing the entire bouquet of services, and packaging together into one application and giving it to the user set,” he says.

Saurabh explains, “While I was building my previous health tech startup, which was one of India's first alternative medicine recommendation platform, called Health Socho wherein we used to aggregate Ayurveda, homeopathy, as well as nutraceuticals and curate content around it. The intent was simple - How is it that we can help this user to get hold of alternative medicine and dispel the myths around alternative medicine? But during the course of building that we saw a lot of people used to keep coming back asking for recommendations on allopathic medicines. And they will just come back saying, “Oh, I have a headache. Could you tell me which allopathic medicine should I take?” And when we when the team would revert to them that it is a symptom and we are not a doctor, so you reach out to a doctor, the responses were even stranger like “It’s just a headache, why don't you just tell us what needs to be taken? What is the harm in telling us what allopathic medicine should one take?”

In addition, the users would also come back stating, we don't have access to a doctor, we have to travel a hundred kilometers 75 kilometers. So if you just tell us, I mean, it will be very helpful, I'll just go down to my nearest pharmacy shop, and tell him that I have been recommended this ABCD medicine, for headache, and procure it. That got me thinking, I mean there, and started delving deeper into what exactly entails into healthcare, and figured out the massive demand and supply gaps, which we have. And in addition, like what the state stated earlier, as well, close to 70% of the medical conditions don't even require people to travel to doctors. So said, let me just figure out a way where I can help these user sets to understand what their symptom is. And it should not be a case where a headache, which might be something else, or a warning signal for a major disease, where people think it's fine to just pop a medication and the symptoms subside. So let me help them with this part and also the accessibility part as India is vast. And most of the doctors, close to 70% of them are concentrated in Tier One and Metro cities. So how is it that I can help people beyond that? So that's why I said, let's start something that builds a product that takes care and checks these two aspects. And that is how CureAssist was born,” he says.

Had a great corporate journey

Saurabh shares his experience of working with big brands like Myntra, Kingfisher, and Godfrey Phillips, “Oh, it's been a lot of fun. And prior to my entrepreneurial journey, I think I was a corporate warrior myself and never thought of being an entrepreneur very frankly. Started off as a management trainee with Godfrey Phillips, was given different cross-functional stints across different geographies, and went on to also manage the flagship brand of the company. And for the five years, I was just having a blast of my life. And then went on to work with Kingfisher, when I was managing brand Kingfisher premium, which again, was a great journey in itself because I got exposed to IPL and Formula One. And what ATL entails, how you manage sponsorships, and then took a leap of faith and took a very, very different route of building a brand partnerships team for myntra. That is something that I had never done in my earlier roles. Also had a great journey with myntra, the entrepreneur bug was bitten there itself. So what kind of joy people get into building certain things. And that's when I decided that I need to take a plunge. And when you say that, when you think that you need to do something, I think the universe also conspires to make that thing happen. Sure, and that is exactly what happened. A couple of my friends reached out to me stating that they are also interested in doing something and We finally took the plunge of building Health Socho,” he says.

Saurabh shares his views on the Importance of brand positioning for a product to be successful, “I think the journey starts with the idea that you are trying to solve a particular problem. But then the bug of scaling comes along. And we think that this is what’s all about consumer acquisition. And we will deploy all of it to Display Network, Facebook campaigns, that is exactly what marketing is all about. And I think, in the past five-six years that is the trend which I've been seeing. But there is a parallel school of thought, which talks about what is it that the user wants to perceive your brand to be? And I think that's the most important part, you as a founder have a vision. But how do you replicate that vision? So that the user is able to understand I think that's the simplistic definition of brand positioning'' he says.

Giving the recent example of white hat, Jr. he explains, ''There's a big debate going on that people are talking about how can six-year-old kids code? I think they did a wonderful job, or whatever fire they have been getting on social media. That's just one part of it. But the intent of polarizing and making people aware of what the country requires is very important. And there are again, two schools of thought: one school of thought is of parents who are absolutely banishing it. Kids need to enjoy, kids need to go outside, kids need to do things, which is fine, no, no denial on that. But there is another school of thought, which is looking at the country where there are 8 - 10 lakh engineers who are graduating annually. How do you differentiate what is the edge which you give to these young engineers so that they are job worthy? And that is where I think it does a great job in hitting the chord right where it needs to be, telling the parents that if you start early, there is nothing which can stop your kid to achieve. The age is also such that you can mold the kid into a different format. So if there is an inherent understanding or a logical thought process, then I think that kid will obviously go in that direction. But that nudge is still required. And I think the advertisement or the campaign in itself did the job beautifully. Whenever people talk about coding, there would be an instance where white hat Jr. would be taken into account. So I think for me, I think it's a tick in the box. But again, I am just stating my views, not of the larger audience,” he says.