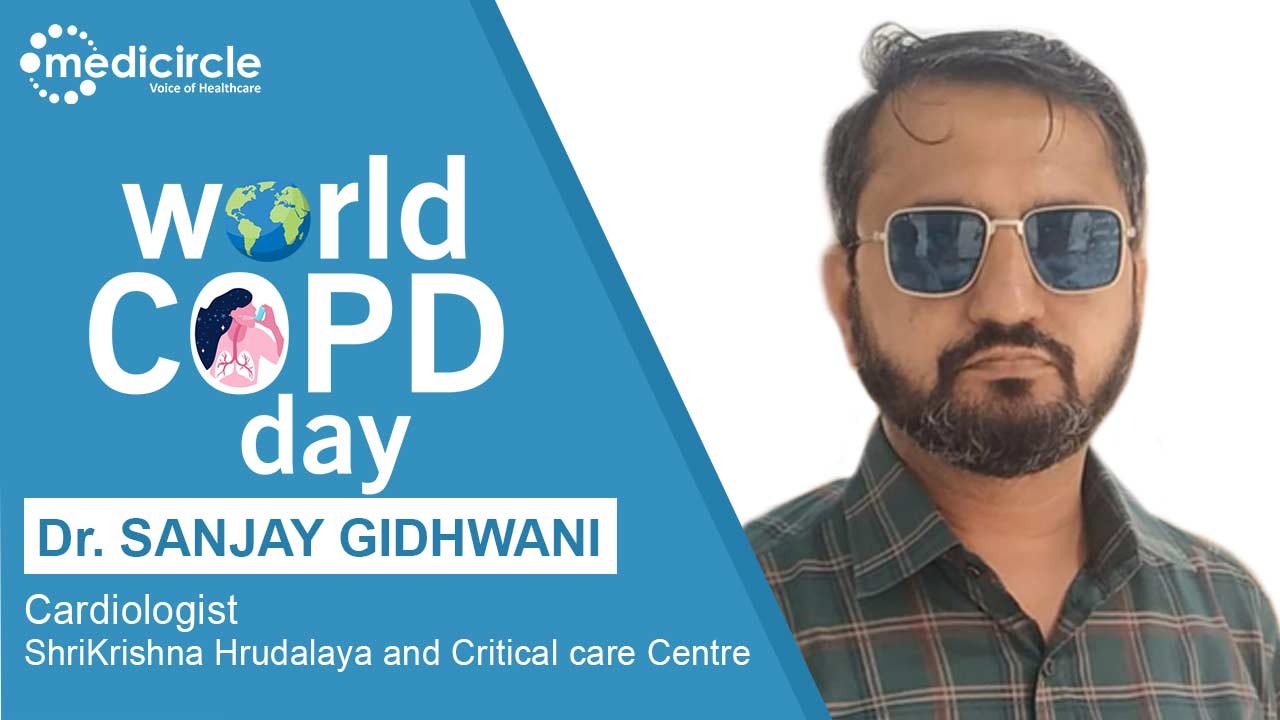 Lung diseases are getting common these days because of unhealthy lifestyles. Know some important causes, symptoms, complications, and treatment of Chronic obstructive pulmonary disease (COPD) in the words of Dr. Sanjay Gidhwani

Chronic obstructive pulmonary disease (COPD) is a common lung disease. Having COPD makes it hard to breathe. Smoking is the main cause of COPD. The more a person smokes, the more likely that person will develop COPD. India is now the ‘COPD Capital of the World’.  Chronic Obstructive Pulmonary Disease (COPD) is the third leading cause of death worldwide, causing 3.23 million deaths in 2019. World COPD Day 2021 is observed on Wednesday 17 November. India contributes a significant and growing percentage of COPD mortality which is estimated to be amongst the highest in the world. Estimates suggest there are 30 million COPD patients in India.

COPD was the second-highest cause of death in India after heart disease in 2017, killing 1 million. COPD led to 13% of all deaths in India, and 7.5 million were at risk of the disease in 2016. We at Medicircle are conducting the World COPD Day Awareness Series to raise awareness, share knowledge, and discuss ways to reduce the burden of COPD worldwide.

Dr. Sanjay Gidhwani is a Consultant at Devanshi Heart and Speciality Clinics, Nagpur. He is attached to hospitals like Shri Krishna Hrudalaya and Critical Care Centre, orange city hospital, Midas hospital, & Sanjeevan hospital. He has also worked as a Consultant Cardiologist at Aster prime hospital.

COPD can be seen in children who are frequently exposed to smoke. Commonly they are being exposed to passive smoking or unknowingly start active smoking in schools with friends or siblings. Deficiency disorder or enzymatic disorder - These conditions mostly affect the lungs resulting in chronic COPD.  Children who are exposed to long-term bronchial asthma in their childhood can also develop COPD.”

Chronic bronchitis - The bronchioles are continuously inflamed and produce a continuous cough in bronchitis.

Emphysema - This results from damage to your lungs’ air sacs (alveoli) that destroy the walls inside them and causes them to merge into one giant air sac. It can’t absorb oxygen as well, so you get less oxygen in your blood. Damaged alveoli can make your lungs stretch out and lose their springiness. Air gets trapped in your lungs and you can’t breathe it out, so you feel short of breath.

COPD is generally nonreversible because it is the late stage of lung damage where a patient needs proper treatment.”

Wheezing or squeaking when you breathe

Tightness in your chest

COPD causes recurrent pneumonia, frequent lung infections, and lower tract infections. Chronic lung infections may result in chronically ill patients. Heart problems - COPD can raise your risk of heart diseases, including heart attack. Quitting smoking may lower the odds. Lung cancer - People with COPD are more likely to get lung cancer. This can be the result of long-term smoking. High blood pressure in lung arteries - COPD may raise blood pressure in the arteries that bring blood to your lungs. This is referred to as pulmonary hypertension. Depression – And living with a chronic illness can lead to depression. This comes as a withdrawal symptom along with a craving for smoking. Psychiatric illness is also common among these patients.