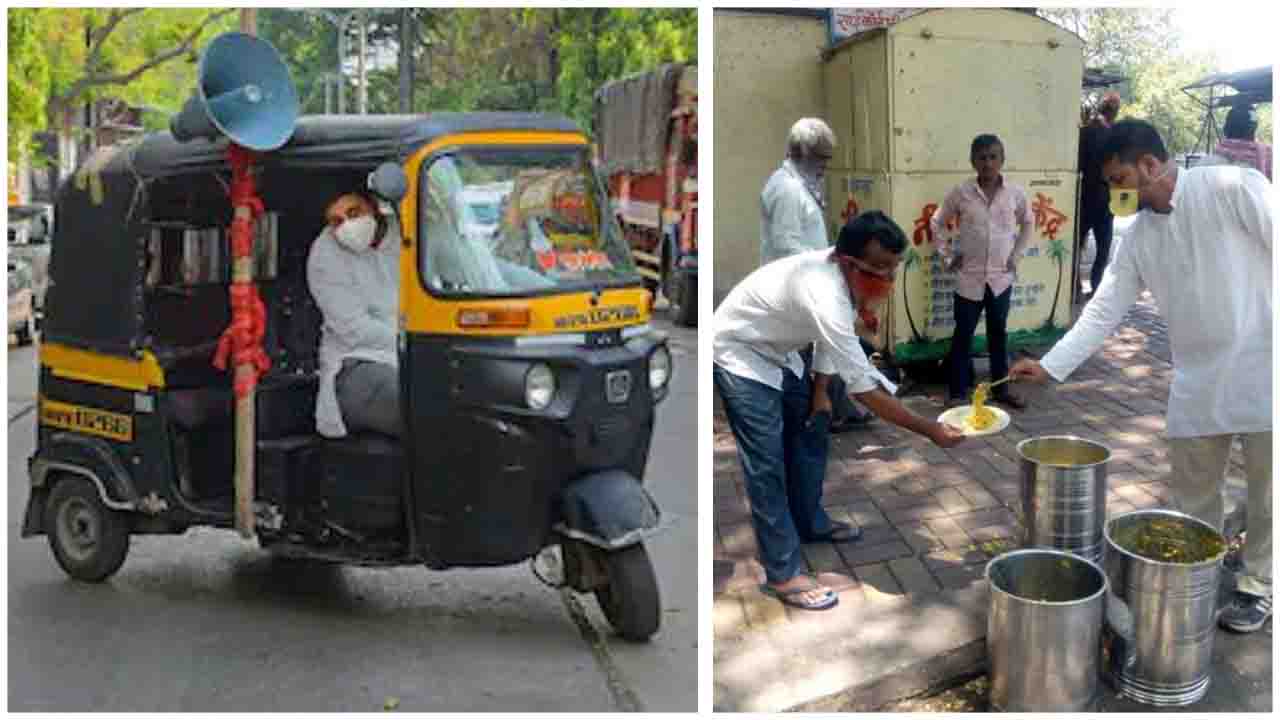 In a noble gesture, a 30-year-old auto-rickshaw driver, who saved Rs 2 lakh for his marriage but postponed the ceremony due to the lockdown, is now using the money to feed migrant labourers and those in distress on Pune streets.

Akshay Kothawale is not just stopping at that but also helping senior citizens and pregnant women by offering them free rides to clinics in his vehicle, and also going around the city creating awareness on how to stay protected against the coronavirus.

With the help of his friends, Kothawale is using the money he saved for his wedding to prepare food for nearly 400 people every day. They then go around the city streets and distribute the food among migrant labourers and poor people.

Talking to PTI, Kothawale, who comes from a humble background, said he feels happy to be able to help others in this time of crisis.

"While working as an auto-rickshaw driver, I could save around Rs 2 lakh for my marriage, which was scheduled on May 25. But, due to the lockdown extension, we thought it would not be appropriate to have the ceremony now, so my fiancee and I decided to postpone the marriage," he said.

During the lockdown, Kothawale was pained to see several poor people, especially migrant labourers, facing hardships due to no work and no income.

"I saw several people on roads who could not even afford to have one meal and were struggling to survive. I and some of my friends then thought of doing something to help the daily wagers and needy people," he said.

"I decided to use my savings for the cause and some of my friends also chipped in," said Kothawale, who is a resident of Timber market area in the Maharashtra city.

They then set up a kitchen and started preparing 'chapatis and sabji' (flatbread and vegetables), which they have been distributing at places where migrant labourers and needy people gather.

"Using my auto-rickshaw, we distribute one-time meal among people at Maldhakka Chowk near the railway station, Sangamwadi and Yerawada areas," he said. Since his cash flow is also drying up fast, Kothawale and his friends have now decided to replace 'chapati-sabji' with 'pulao', masala rice or sambhar rice, he said.

"But, we are continuing distribution of food among the migrant labourers and those in need," he said.

The group intends to continue providing food to people at least until May 31 with the help of the funds they have.

Kothwala has also put up a loudspeaker on his auto-rickshaw through which he and his friends have been creating awareness among people about the coronavirus and how to stay protected against it.

The group has also distributed masks and sanitisers to roadside dwellers.

"Amid the lockdown, I am also offering free rides in the auto-rickshaw to senior citizens and pregnant women who need to visit a doctor," Kothawale said.

During the Sangli-Kolhapur deluge last year, he and his associates had sent food and other relief material for the flood-affected people, he added.

In Maharashtra, Thane district, Pune city and its neighbouring Pimpri Chinchwad have been declared containment zones in light of surge in COVID-19 cases thus imposing further restrictions on people's movement. All the restrictions in place under the ongoing lockdown will remain in force without any change.

The relief given in the April 17 notification issued by Deputy Chief Minister Ajit Pawar, for certain zones will not be available for Thane district, Pune city and Pimpri Chinchwad. Areas within municipal limits of all three place have been sealed till further orders.
Areas under the municipal councils of Ambernath, Kulgaon Badlapur and Nagar panchayat of Shahapur and Murbad, besides the entire area of Thane Zilla Parishad will also fall under the containment zone. Pune Municipal Corporation (PMC) Commissioner Shekhar Gaikwad in an order declared entire Pune city as a "containment zone". His Pimpri Chinchwad (PCMC) counterpart, Dr Shravan Hardikar, also issued a similar order. As per the orders, the entry and exit of people, barring those carrying out essential services, into and outside the corporation limits has been prohibited.
Action will be taken against those found roaming in the cities unnecessarily.