''Digitalization has been a game changer for the visually impaired'' says, Ramakrishna Raju, Founder and Executive Director, Vision-Aid 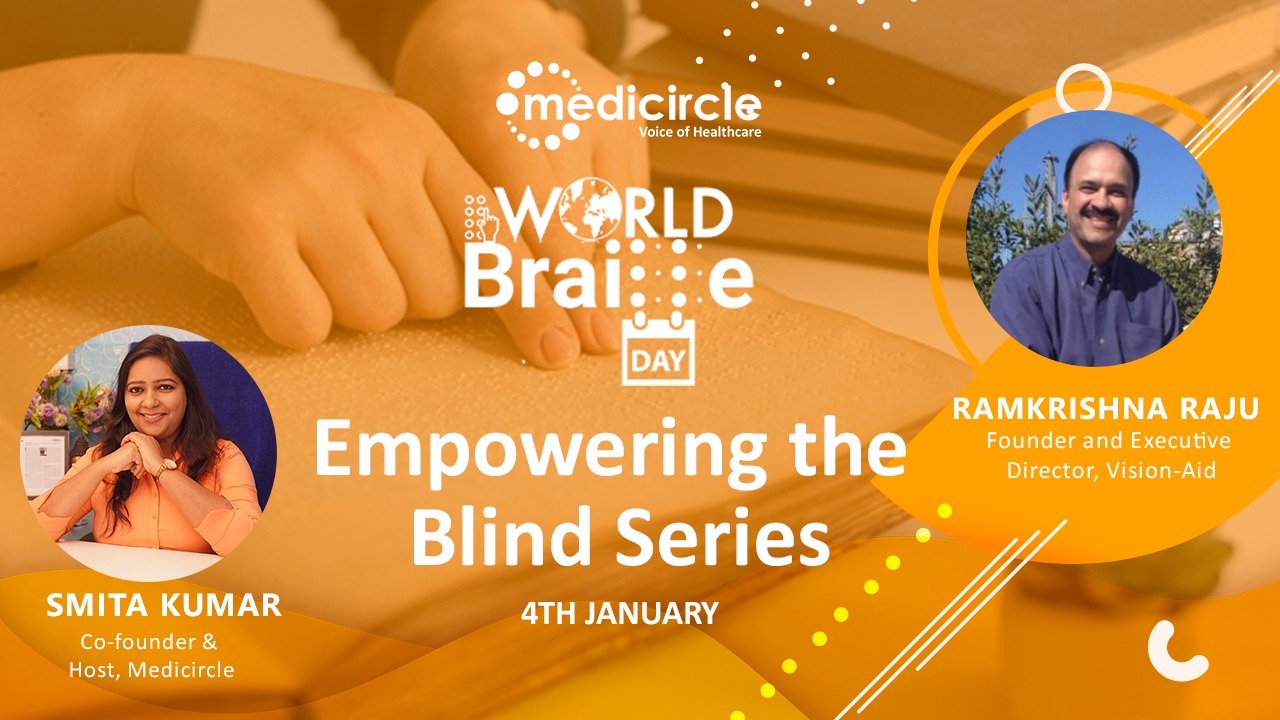 “Where there is accessibility, there is no disability. So if we can make the world accessible, the digital and the physical world then we can help the visually impaired,” says Ramakrishna Raju, Founder, and Executive Director, Vision-Aid

Do you know India is home to over 20 percent of the world’s blind population? Nearly 40 million people in India, including 1.6 million children, are blind or visually impaired. At Medicircle we are conducting the Empowering the blind series on the occasion of World Braille Day. We feel braille is not just a code but a source for the empowerment of the Blind. Through our Empowering the blind series we aim to create awareness about the situation of the visually impaired population in India, and highlight individual and organizations actions that strive to create a world full of possibilities for the visually impaired

Ramakrishna Raju, is the Founder and Executive Director, of Vision-Aid. He has over 25 years of experience as a subject matter expert in advanced information technologies and has authored and published several research papers. Harvard University recognized him for his public service with the Derek Bok Public Service Award in 2019 and in the same year Children’s Hope India, a New-York-based non-profit recognized him with the “Making a Difference Award”.

Vision-Aid is a nonprofit organization that has been enabling, educating, and empowering the visually impaired to live with independence and dignity, since 2004. Vision-Aid runs resource centers for the visually impaired in ten locations in India presently, with more being added each year. It also offers a range of online programs.

Ramakrishna shares his views, “India has a disproportionate share of visual impairment for a variety of reasons. While we cannot eliminate all of the blindness, what we should do as a society is to eliminate the disability caused by blindness and vision impairment which can be done in three different ways:

Digitalization has been a game-changer for the visually impaired

Ramakrishna sheds light on the subject, “Digitalization has been a game-changer for the visually impaired and for people with disabilities in general. When we started 15 years ago, our initial focus was primarily on technology. And in fact, we were one of the first organizations in India to introduce computer training using software like JAWS and today NVBA ie. another popular software which is available free of charge. So using such technologies and tools, the visually impaired can use all the features in computers and beyond computers; there are many other technical applications. But the question about the importance of Braille is that it is not overtaken and made redundant by technology, in fact we need both. So use technology to the best possible extent, but also equip the visually impaired with skills in Braille, so that they have more tools in the toolkit. Braille has many advantages of its own, if you teach it to children when they're young, they can develop cognitive abilities. One downside with technology is that its divide keeps getting bigger and bigger between the haves and have-nots as the technology keeps progressing. We are trying to reduce the gaps between the haves and the have-nots so that the visually impaired and those who are marginalized can also benefit from technology just like the rest of ourselves,” he says.

Ramakrishna explains, “There are three different areas where the visually impaired both blind and low vision persons face challenges:

So these are the three big issues, which we are trying to address,” he says.

Ramakrishna shares his thoughts, “We have started to see some encouraging signs in our work in 15 years, along with progress in many areas, but much needs to be done. One of the biggest gaps is that even in large secondary and tertiary eye-care systems, vision rehabilitation is often neglected. So what we are trying to do is work with the largest eye-care systems in the country and help them incorporate programs for the visually impaired, we are trying to make use of those to create a large pool of resource centers throughout India, within the healthcare system. So using the existing health care system, especially the eye care systems, we can now take it to the next level and incorporate vision rehabilitation programs inside those facilities,” he says.

More information about Vision-Aid can be found at:

A list of all the freely available training resources offered virtually can be found at The Vision-Aid Online Academy (VOA) at https://training.visionaid.org

The new Digital Accessibility Testing (DAT) Center in 2020 was an important recent addition since it not only offers quality DAT training but also offers employment to persons with disabilities who offer expert manual and automated standards-based Web Content Accessibility Guidelines (WCAG) testing for clients globally.

More information about this exciting capability can be found at: https://webaccessibility.visionaid.org.