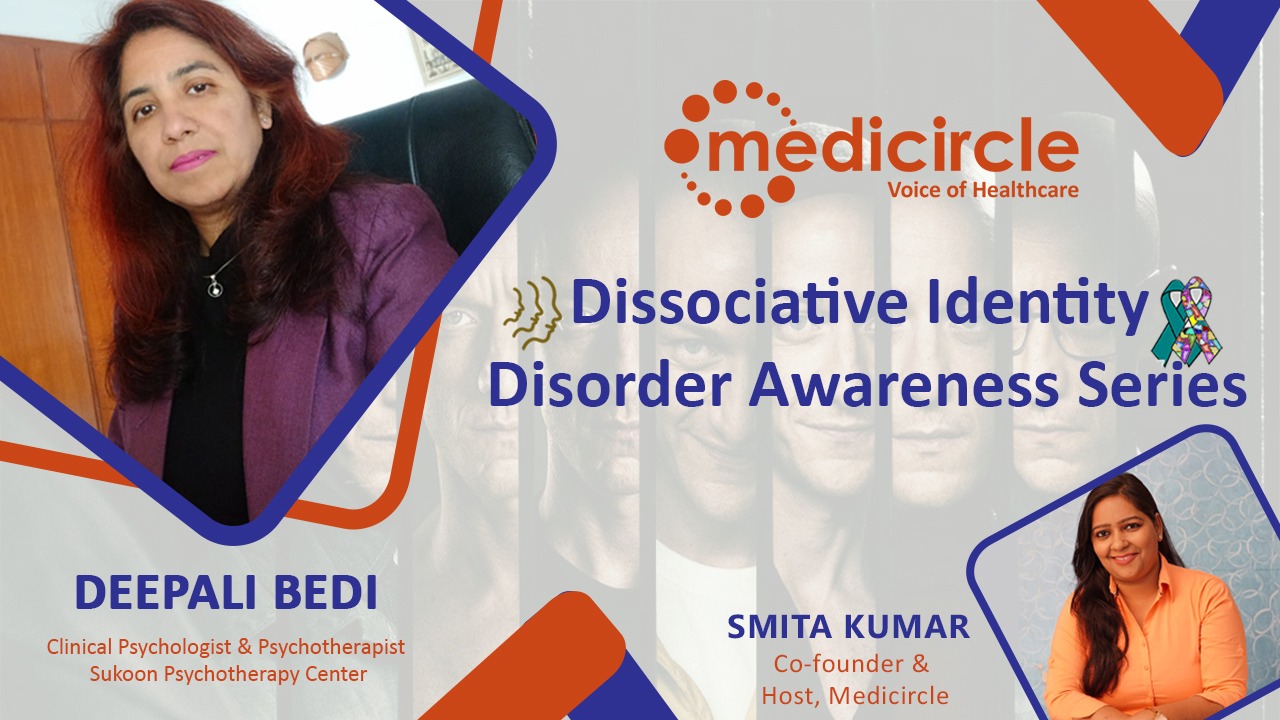 We need to create safe spaces for ourselves and people around us where we can express what we want out of life and be content with life. The more we express the less we have to hide behind falsehoods, says Deepali Bedi, Clinical Psychologist.

Losing touch with the real world and your identity can be difficult to cope up with. Dissociative Identity Disorder (DID) was earlier known as Multiple Personality Disorder. It occurs when an individual has two or more distinct personalities or identities. The alternative personalities alter the mood. The patient cannot control his own personality as the alternative personality is believed to take turns to come in control and the patient is not aware of what is happening. It impacts the quality of life of an individual. Medicircle presents the Dissociative Identity Disorder Awareness Series featuring eminent Clinical Psychologists, Psychiatrists, and Psychoanalysts with the purpose of spreading awareness of its existence to today's society and help bring about understanding and compassion towards people suffering from DID.

Deepali Bedi is a Clinical Psychologist with an RCI recognized degree in infant clinical psychology. She has more than 15 years of experience in the field. She has worked with reputed hospitals, corporates, and schools. She is the founder of Sukoon Psychotherapy Center. Under this banner, she works with various corporates like Motherson Sumi Infotech & Designs Limited (MINDS), Tata Consultancy Service, Jabong, Tower-Vision, The Rising Sun, Kyzen Infotech Pvt Ltd.etc. In association with various EAP providers, she has also worked with the British High Commission, Reuters, LinkedIn, Fiserv, AON, Sapient, NIIT Tech, Ernst n Young, Bechtel, Freescale, Google, HSBC, Colt, Credit-Swiss, HP, Procter and Gamble, Johnson and Johson, etc. She is well versed in the complete management of individuals with various psychological interventions Her specialties are Management of Psychiatric and non-Psychiatric problems, Relationship issues, Stress-related Problems, and Psychodynamic Psychotherapy.

Deepali emphasizes, “When we are talking about Dissociative Identity Disorder, we are also saying that the person is not aware that he or she is dissociated and might not be in a position to seek therapy. Usually, even the people around such people, if he /she wanders off from the original place might not be able to realize that the person needs some kind of therapy because those people might not really connect with what the person was initially. So, people suffering from DID wouldn't be the ones who would initiate therapy. It would be their loved ones who are able to find out that there is seemingly a disconnect and take that person for therapy. So, the therapy might not begin with the choice of the person who was actually experiencing dissociative identity disorder. But there might be a need of telling them that there is a possibility of such a condition and then working upon them to figure out what makes them uncomfortable in their original identity,” says Deepali.

Understanding of DID through a Real Scenario

Deepali explains DID with an example, “In one of my cases, a lady wandered off from her marital house and was found near rail tracks. She was not able to identify herself as what she currently was according to the husband and other members of the family. She somewhere identified herself as somebody else. She almost identified herself as what she was in her maiden phase and she identified herself by her maiden name and her maiden realities. So, when she was brought to a Psychiatric Center by the family, she was put on an antidepressant. But that didn't work till we could build a rapport with her, knowing about her desires, why she was unhappy, and things like that. I wouldn't say that the husband was extraordinarily abusive but she could not relate with that family because that was not the family of her choice. That was not the marriage of her choice. She didn't want her to get married to this person. She had been in love with somebody before getting married and because she lost her father, at that time, she was forcibly married off to another guy.”

Deepali further emphasizes, “So, we basically follow a process where we let the person express the desires in a subtle way like with use of paintings and drawings so that they are able to express just as we did in this lady’s case. We managed to let her realize her reality. She chose to live in reality ultimately. She chose to go back to her husband and to take care of her husband's children, who were not her children because that was the second marriage. So, people suffering from DID need a lot of support and understanding of their own desire, their own fantasies, their own anxieties, which are coming up in the situation, which might actually help them explore how they want to basically negotiate their own way out of the situation. That's how it works,” says Deepali.

Deepali mentions, “If we go to the core of most of the disorders, which are around the dissociation, various form dissociations have various subtypes, where dissociative identity is one, but dissociation usually is a defence mechanism, which occurs when a person is not able to handle the reality. The person represses the reality and formulates another reality for oneself. This usually happens because the reality outside might be too difficult to digest. For. e.g., in that lady’s case, the loss of the father and subsequent marriage to another man and not the one she loved was the reality she was not prepared for and just liked to forget that or not connect with that reality.

The biggest advantage in these situations is people who are educated enough to understand what reality can be and how difficult it can be to have a lot of expression of their own emotions. Also, in the Indian scenario, we actually encourage a lot of repression of our own desires, our own fantasies, which is indeed the reason that anxiety is more in us. There's a lot of mental health issues that are coming up because we are almost living a fake life. Fake life increases repression and ultimately various symptoms might be seen because of that.

We Need A Safe Space to Express Ourselves

Deepali points out, “We need a safe space where we can express our difficulties. We need a receptive society and a capacity to express what is going within us. We are not supposed to express our preferences. We are not allowed to be the way we want to be. We are just trying to fit in. So, basically, somewhere down the line, we are losing ourselves in the process. All this needs a lot of energy to repress our desires, and thus the illness. The more we have the capacity to express, the lesser we would require to hide behind various masks or falsehoods and that would be better for us. One has to almost pretend to be something different. We are consuming a lot of energy into it and we are basically consuming ourselves into that. Whereas, if we express ourselves, we can actually live a better life because we can consume our energy into becoming the better self, a better version of our own selves, in a way,” Deepali says.

Split Personality Harmful or Not

Deepali explains, “It all depends on what is the split? It might not be harmful to others at all. So it depends on what is the quality of the split. What are the people splitting themselves into? If there is a lot of aggression, and they're splitting, that aggression might come up. But every split might not be just coming out of aggression, there might be frustration and things like that. So, it is not always harmful. But yes, a person who has to live in dissociation away from one's own reality, does not experience an easier life.”

Deepali provides an example of a client who is bisexual and is on the verge where she wants to break her marriage because she wants to have a female partner for herself. “So, where there is a difficulty of expression, the fear of presenting oneself in the true light, it's almost destructive for everybody in that relationship or in that scenario. So, we are not creating safe environments for people so that they can talk about their sexual desires,” adds Deepali.

People in General are Living with Two Identities

Deepali mentions, “I think now we have become a society where we cannot even talk about what is our financial status or how is the relationships in our house. We almost pretend to make everything look good. We are on social media, putting our best pictures, whereas it might not be the reality. People in the worst phases of a relationship or marital discord might have the best of their couple profile put up on social media. These are two identities that we are living with."

Deepali further points out, “The boys are said you shouldn't cry if you want to be a man enough. Basically, we are saying repress your feelings or don't express your feelings. So, we have been or we are training ourselves to repress. It's not just social media, we somehow as a society are moving towards that direction more and more. With time, we are going away from our realities and thus the repercussions of the society.”

We Need to Accept Imperfections of People Around Us

Deepali  informs, “if the person is suffering from dissociation, there are a lot of things around the person which are not going right. So, one important thing is somewhere seeking the right therapy and the right help and being adaptable enough to change and express and create a more transparent life and less repressed life for everybody. A lot of healing doesn't happen because the family members around them don't want to change. It's difficult for them to even accept what is the reality and if we see the perspectives of the family members, obviously it is also difficult for them because we all live in a society where expressions of emotions of difficult changes, acceptability of the physical things are becoming more and more difficult. We are almost imagining a world where it's about presenting the best. We are almost marketing ourselves and our families as best packages. So as a family also, it needs a lot of healing in terms of understanding that it's fine to have somebody who is not perfect and accepting them with their imperfections,” advises Deepali.

Dr. Bedi mentions, “Just a few days back on the occasion of women's day, I came across a picture of a female where she was multitasking. I was wondering if it's every female's choice that she needs to multitask to that extent. Maybe not. We put females on a pedestal, a mother on a pedestal, and then she is supposed to be godly. It is difficult to be there. We should allow imperfections. We are not a perfect society. None of us can be perfect. There should not be an expectation that the person needs to be perfect or achieve a lot. We have created a society where we are looking for people to be too perfect; without any issues right from our childhood. We want everyone to be in the same mold. Earlier we would go to a party, although there were very limited clothes in the market, somehow or the other, we would all be wearing different kinds of clothes. But now the market has more clothes, the market has more to give us but interestingly, every season or a party almost has a color defined and half of the people would be found in the similar color wearing a similar dress. We are not being allowed to be the way we want to be and we are losing ourselves in the process,” says Deepali.