Dr. Anshuman Manaswi, Plastic Surgeon Speaks About the Advanced Surgeries Available in Lymphedema Treatment Which Can Cure the Disease 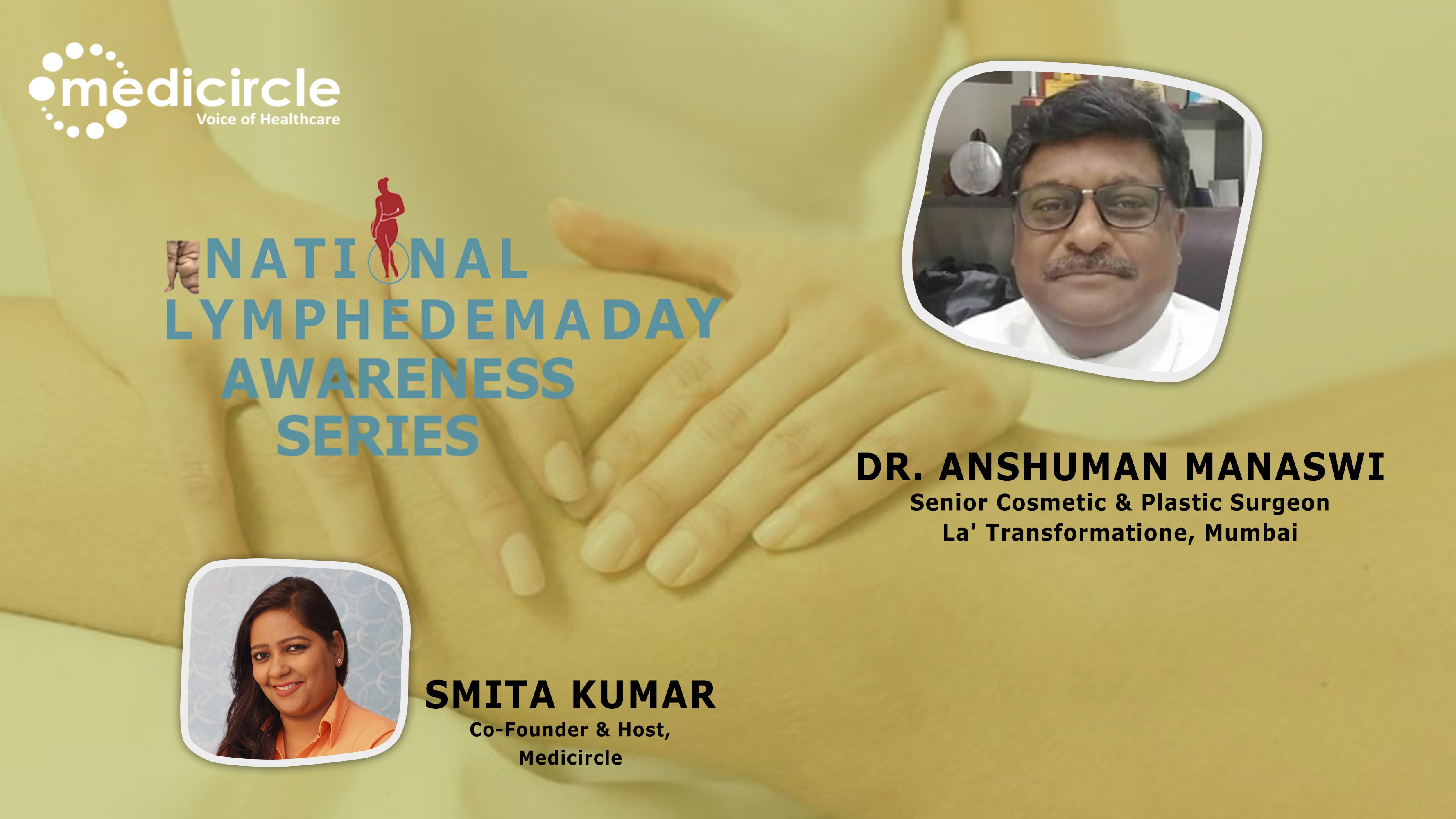 “Massage and Bandaging form a very important part of lymphedema treatment. Surgery isolated may not be helpful unless we made the tissues soft before the surgery, making it more pliable and continuing it later on also,” Dr. Anshuman Manaswi, Plastic Surgeon.

Lymphedema is a chronic condition caused by a compromised lymphatic system that results in abnormal swelling of the extremities. Most often lymphedema is the result of surgery, or some treatment for breast either prostate or gynecological cancers, or melanoma, but people can also be born with it. Lymphedema is not a rare disease. Yet many people with this incurable condition either go untreated or receive ineffective treatment. To help counter the lack of awareness we at Medicircle are conducting a Lymphedema awareness series featuring eminent Vascular Surgeons, Physiotherapists, and especially Plastic Surgeons, treating lymphedema to help raise awareness for all of the people, find knowledge and innovations that support them to live their best with this disease.

Dr. Anshuman Manaswi is a board qualified Senior Cosmetic and Reconstructive Surgeon having a rich experience of over a decade. He's the Senior Consultant at the Department of Plastic and Reconstructive Surgery at Bombay Hospital and Medical Research Centre, Mumbai, and also associated with Nanavati Super-specialty Hospital at Mumbai. He's also founding director of La Transformatione’, a chain of cosmetic surgery facilities.

Dr. Anshuman explains, “Just like the Vascular system where pureblood from the heart goes to the tissues and impure blood goes to the lungs purified and then comes to the heart, there is one more system parallelly existing of the similar kind of pipes called the Lymphatic system. The purpose of this system is to carry the lymph fluid, the fluid which is not drained by the blood vessels and goes to a structure called lymph nodes or lymph glands. These glands are present all over the body where they get filtered through another chain of pipes that drain to the veins. So, this system is just like a blood vessel parallel to it running with the same mechanism and is very active. It has got its movement to drain the fluid. So, if there is an obstruction in the system, the fluid is not able to go further and gets accumulated. This becomes Lymphedema. The obstruction can happen at the lymphatic level or the node level,” says Dr. Anshuman.

Dr. Anshuman lists out some reasons –

“The lymphedema occurs because of the fat accumulation of the fluid or some people do not develop enough lymphatic channels.  Filariasis – It is generally seen in the coastal and the eastern part of the country where mosquito leaves the filarial worms in the lymphatic system and they block the system so that the fluid is not able to go up.  Cancer surgeries – In some cancer surgeries like breast cancer and gynecological cancer, the lymph nodes are removed. Due to which there is an accumulation of fluid resulting in Lymphedema.”

Advancement in Surgeries for Lymphedema Treatment

Dr. Anshuman adds, “Till a few years back, there was no cure for lymphedema. Surgeries that used to be there, were very costly and morbid. And in such a case, we were also not very keen on subjecting the patient to that kind of a big surgery with a lot of blood loss and a lot of morbidities. The only treatment was Massages. In the last 3-4 years, some really good surgeries have come which can cure the patients. And if not cure, at least it can decrease the magnitude to quite an extent. And these surgeries are vascularized lymph node transfer, the lymph node - venous shunt, lymphatic venous shunt, Liposuction, and other debulking surgery. We have started a center in Mumbai for lymphedema care where we have therapists, physiotherapists, plastic surgery all under the same roof so that a comprehensive treatment can be given. Massage and Bandaging form a very important part of this cure system. So, surgery isolated may not be helpful unless we made the tissues soft before the surgery, make them more pliable and continue it later on also. This is called manual lymphatic drainage. After surgery you can probably see the improvement in two-three days,” stresses Dr. Anshuman.

Diet Should be Less Fat but Don't Compromise with Essential Fat

Dr. Anshuman suggests, “Fatty diets can increase the formation of lymph. So, it would be better to have fewer fatty foods but shouldn't be deficient in essential fatty acids like Omega 3 fatty acids. Less fat leads to less lymph.”