Dr. Jitender Aggarwal, Founder, and CEO, Sarthak Educational Trust presses on the need for the Government to spend more on Healthcare 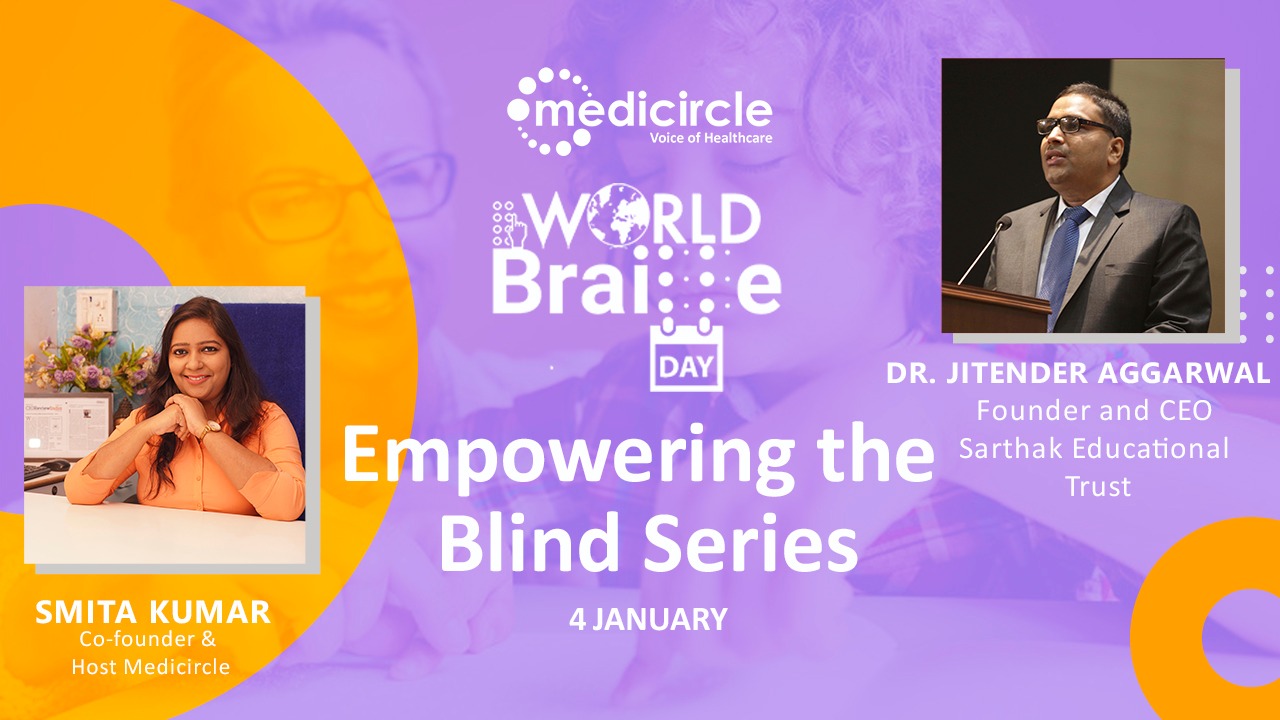 At Medicircle we are conducting the Empowering the blind series on the occasion of World Braille Day. We feel braille is not just a code but a source for the empowerment of the Blind. Through our Empowering the blind series we aim to create awareness about the situation of the visually impaired population in India and highlight individual and organizations actions that strive to create a world full of possibilities for the visually impaired

Dr. Jitender Aggarwal, Founder, and CEO, Sarthak Educational Trust while practicing as a dentist in 2004, he lost his vision due to Macular Degeneration of the Retina.

Sarthak Educational Trust started with inclusion and empowerment of underprivileged and now are working for Excellence in Skilling by promoting skills of divyangs enrolled in higher education through the National Abilympics Association of India.

Dr. Jitendra shares his views, “Biggest challenge faced in India by divyangs is accessibility, lack of technology and opportunities. To make any blind ‘Aatma-Nirbhar’ these three verticals have to be made available to PwDs, at a war-footing, followed by other initiatives. Various interventions need to be implemented to make them self dependent, some of which should include:

(a) First and foremost being treating them as equals and any regular citizen of the society, which relates to reducing the social barriers.

(b) Providing them equal opportunities in education, skills as per the market requirements, and providing meaningful employment opportunities through empathy, rather than a sympathetic mindset, so that they can lead a dignified and financially sustainable life.

(c) Providing them an accessible environment, in terms of mobility, technological and infrastructural advancements, so that they can carry out their regular daily activities without any physical barriers, eg. If a blind person is provided and trained on text to speech software like JAWS or NVDA they can easily excel in computer-related job roles.

(d) Providing self-employment opportunities, especially for rural VI’s can be highly productive in increasing GDP and financial contribution in the economy of our country.

(f) Focusing on raising awareness of all stakeholders about the capabilities and challenges of visually impaired and strengthening their capacities,” he says.

Digitalization for the blind
Dr. Jitendra talks on the subject, “Braille has been practiced for many years and was one of the most effective modes of reading and writing for the visually challenged, as no other options were available. However, in today’s scenario digital transformation has opened many new and better avenues for the VI’s. Using Braille has certain limitations or disadvantages:

Reading speed is significantly slower than for print reading or recorded materials.
-Daily and current brailed information is not readily available easily or everywhere
-Braille materials are expensive  including paper and printers
-It takes up considerable space and storage problems Spelling skills require special attention because of the constructions, leading to more mistakes. Digitization which now includes the use of computers, Smartphone’s and other electronic devices have acted as a boon for the visually challenged persons, as many have adopted to use them in every field and sphere of their life. These are predominantly used everywhere now in all spheres -  education, skilling, work environment, and hence to be a part of the mainstream, VI’s need to be technologically updated and able to make use of it, to become more included in the mainstream.

Software testers in IT sector companies,” he says.

Challenges faced by the blind or partially blind individuals in India

Dr. Jitendra explains, “The biggest challenge for a blind person, especially those suffering complete loss of vision, is to:

Navigate around places.   The accessibility in public places whether it be the transport facilities, buildings, marketplaces, railway stations, bus terminals,  or for that matter even the footpaths are highly inaccessible, despite the guidelines laid down in the RPWD Act, 2016. Another challenge faced by the blind in our country is the availability of affordable accessible technologies, assistive devices, which the majority of VI cannot access and make use of. One of the most important challenges faced by VI in our country is to get meaningful employment opportunities. Though many of our VI’s have good computer literacy and even higher education degrees from premier Institutes like IIT’s, IIM’s, and many other technical and non-technical universities and colleges, employers are still reluctant to hire VI’s in mid or senior level positions available in their organizations. Currently, another challenge faced by VI in our country is identifying currency notes, which have been changed after demonetization. Getting equal opportunities to study in mainstream schools and colleges, nonavailability of trained staff to handle VI candidates, is also an important shortcoming in the process of their inclusivity. VI children do not receive adequate educational and developmental help during their pre-school years; neither their parents nor regular classroom teachers are equipped to give them the special assistance they require in the school situation. In-sensitivity towards VI and societal negative attitude is also a big factor that is impacting them in our country. Most people tend to see the blind and low vision as liabilities and do not treat them with respect or give them their rights due in society.

Poor financial backgrounds and lack of resources also make them highly vulnerable to be part of the mainstream societal activities,” he says.

Shortcomings in terms of medical facilities available for VI in India

Dr. Jitendra sheds light on the subject, “In general, there are many shortcomings in terms of medical facilities available in India, which directly impact the health and well-being of VI’s -

Inequality in Urban and Rural Facilities - In India, unlike other countries, there is a huge urban and rural divide, as people in cities and towns have more spending power, mostly better healthcare services are available there, leaving the rural areas lacking in medical facilities. Over 60% of hospitals, 70% of dispensaries, and 80% of well trained and qualified doctors operate only in the urban areas. Inadequate Infrastructure - India also has a low number of specialist doctors, especially in rural areas and community health centers. No Optimal Insurance - In India, healthcare is becoming more expensive and practically unaffordable to some strata of society. Hospitalization and treatment costs are very high for many to afford. The only respite patients can get is through insurance, which is hardly available for the poor. Delay in Diagnosis of Illnesses - There are many incidents of delayed diagnosis, reasons for this are either lack of infrastructure, lack of education, counseling, and proper medical staff in rural areas which leads to higher incidences of blindness and other medical complications. Getting Medical Staff to Work in Smaller Cities - Hospitals in tier-2 and tier-3 cities struggle to keep their well-qualified doctors and nurses working for them. Most of them wish to relocate to bigger cities for better access to facilities, their children’s education, and so on. Illiteracy and lack of awareness lead to non-usage of the available medical facilities. In most parts of India, there is poor sanitation and living conditions, malnutrition, and no access to preventive cures for diseases. Healthcare systems are not able to operate efficiently to serve all because of the lack of education, high population, and gender bias.

The government doesn't spend enough on healthcare. It is viewed more like a loss than an investment,” he says.