‘’Healthcare which is available but not accessible is of no use,’’ says Dr. Shelly Batra, CEO, Every Infant Matters 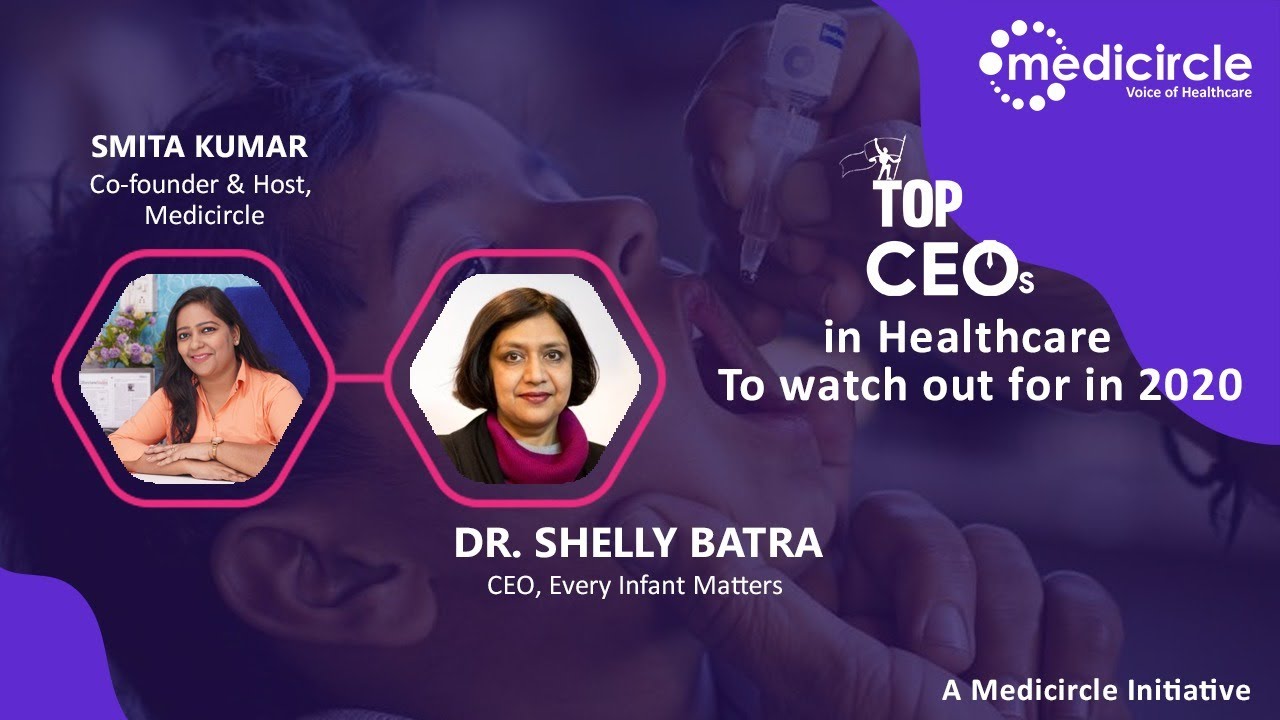 “The biggest reason is that the resources in the world are limited but the work is practically unlimited. So any organization that has a low cost, high impact program, with a small amount of effort, and money invested will give huge results,” says Dr. Shelly Batra, CEO, Every Infant Matters.

Dr. Shelly Batra, CEO, Every Infant Matters, was selected as a Social Entrepreneur and Schwab Fellow by the World Economic Forum in 2014 and is the past President & Co-founder of Operation ASHA. She is also an Ashoka Changemaker, Huffington Post blogger, and a best-selling Penguin author.

Every Infant Matters is a Non Profit organization registered in India. It is dedicated to improving the lives of disadvantaged children and ensuring ubiquitous access to healthcare.

Resources in the world are limited

Dr. Shelly shares her journey, “I've had a multifaceted career. I started as a doctor, and then I came to Delhi and worked at All India Institutes of Medical Sciences (AIIMS) and some government hospitals. These are the places where the patients cannot afford private medical care. Post AIIMS I joined a very fancy private hospital, state of the art facilities with very good equipment and payment, and I was doing the best quality work but I felt that something was missing. So I started my journey as a social enterprise. When I visited the slums, I met patients, sat on a pile of stones with a prescription pad, a crate of medicines, and treated them. There were some who needed surgeries, but the public hospital would ask them to come after six months. So I built a group of donors who would donate small amounts so as to get the surgery done economically and without adding my charges, going forward I realized that though I'm helping so many people, there is no impact in a particular public health problem like malaria, TB, or mother and childcare, and that led me to incorporate my first NGO operation ASHA together with a co-founder in 2005. Recently I've joined as the global CEO of Every Infant Matters which started in India 4 years ago. Why I made this transition? The biggest reason is that the resources in the world are limited but the work is practically unlimited. So any organization that has a low cost, high impact program, with a small amount of effort, and money invested will give huge results. That is the organization that must go to scale. And that is what I found in every infant matters. It's now working across three continents in four countries and as the name suggests, the mission and vision of the organization is to serve disadvantaged children with Health Solutions and the last mile,” she says.

Vitamin A deficiency can make a child go blind

Dr. Shelly speaks on Every Infant Matters, “The flagship project is such a simple and cost-effective project. There are people with iron deficiency anemia, vitamin and mineral deficiencies but there's one thing that people do not know that vitamin A deficiency can make a child go blind. 250 million children across the world have vitamin A deficiency and 1 million children, every year become blind due to this reason. The reasons for Vitamin A deficiency are that the children have just boiled rice to eat since milk, eggs, paneer, and cheese are expensive. The flagship project of every infant matters is giving two drops of vitamin A, and you can give a child a lifetime of vision, sight, education, schooling, and jobs. So that's what appeals so much to me, a low-cost simple solution that will prevent blindness. There are a lot of people working for blind children in India, but the challenge is that it's just not enough, and something that can be prevented should be prevented,” she says.

Healthcare must be affordable, accessible, and available

Dr. Shelly sheds light on the subject, “These are very big issues and the whole world is talking about them. Healthcare must be affordable and available. Being available is not enough if people cannot access it, if it's available 100 miles away, what's the point of it all? Now, the Government of India, like all governments has got a very good health infrastructure. They have public hospitals, villages have their primary health centers, secondary health centers, all this is available but the challenge is accessibility. When Every Infant Matters started its work, one of the projects was to lead training classes for nuns in religious centers because there's no doctor for miles around, in the remote parts of Assam. Now in our country, infant mortality, maternal mortality, the undefined mortalities are a matter of great shame for all of us that we are doing so badly on the health indicators. The reason being healthcare is not affordable, they can't go to the fancy hospitals in the cities. Hence, we can train local people into identifying issues and facilitating the transfer, so one of the training components for the nuns was when to refer a patient to the government hospital. In Nigeria, every infant matters have started a project. It's a very ambitious project that is going to take me more than a decade to do it. But we've started now, and the project is that we will fulfill the country's need of training 1 million community health workers. This challenge of making things accessible and affordable can be mitigated by bridging the gap between the government infrastructure and the disadvantaged communities and this could be a solution that will work across the world,” she says.

Being a woman has been a matter of great pride

Dr. Shelly explains, “I feel that being a woman has been a matter of great pride and happiness for me. And it has been a very big asset. People feel that women can't do this, and the family will hold them back and so on, especially in developing countries, but there is no such thing. People really appreciate that you are a woman and going the extra mile but the mission in life is not to only make money, there is another part where there is no money, but there are results and outcomes with people getting healed and getting better and that is the part I could identify a long time back. So I'm proud I'm on that path at the same time while doing my medical practice. This aspect of serving the poorest of the poor is rewarding. And being a woman has given me so much encouragement that the Schwab foundation that is part of the World Economic Forum selected me to be a social enterprise. I was declared an Ashoka Changemaker in 2010, so these awards give you a little encouragement to go on. And I think the time has come where women can really take their place in the world while the menfolk cannot hold them back and it’s very important that women should be out there in the front. And I'm proud to say that in my organization, every infant matters, we have broken every gender barrier as we believe in inclusion and diversity. So if you see the directors, the field workers, the health workers, we are training, more than 60% of beneficiaries are women. So I think I'm proud to be a woman and maybe I've achieved so much because of my gender,” she says.