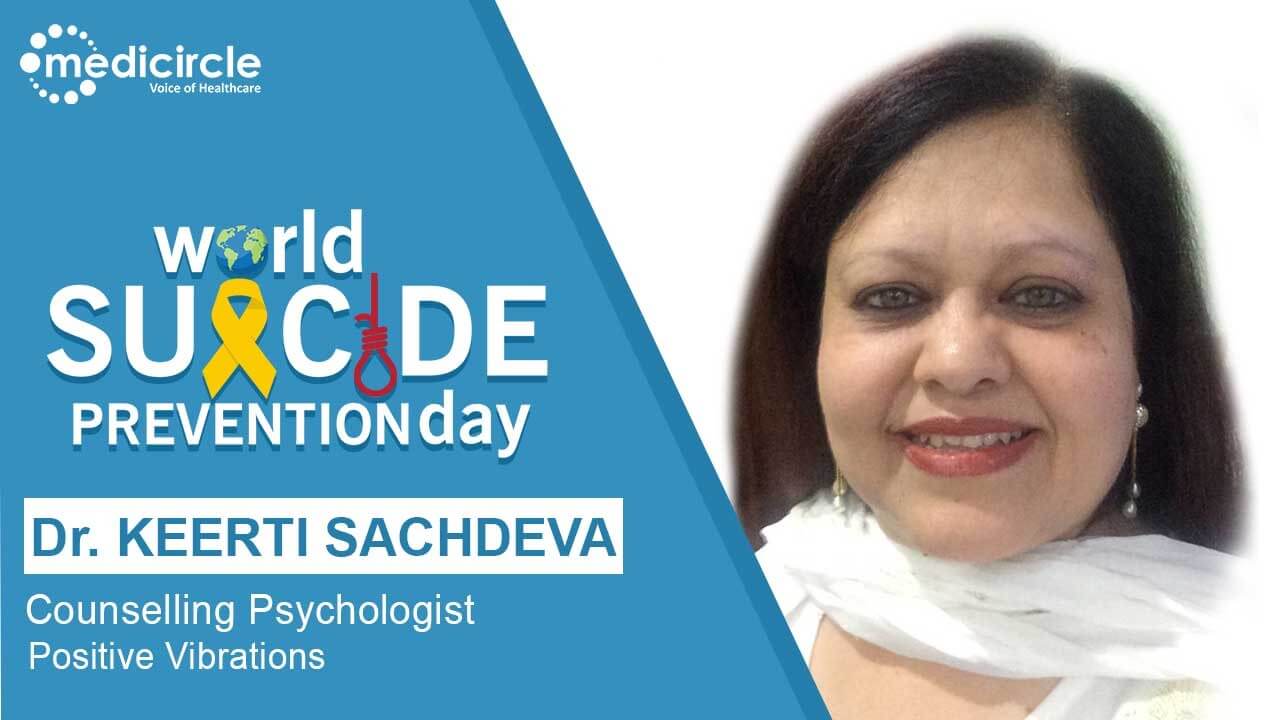 Dr. Keerti Sachdeva gives high alert warning signs which must be identified and spotted by family and friends for patients who are prone to suicidal tendencies. Her expertise in treating cases of suicidal tendencies as a psychologist truly adds great value for family members and friends to understand it and treat it before it's too late.

We lead busy lifestyles and barely get time to sit and actually process our thoughts, which is likely a reason why mental health issues or underlying problems go unassessed. The majority of these occur in underdeveloped and developing countries. These figures are startling, considering that suicide is preventable. Undiagnosed and untreated mental illness is the biggest reason behind the suicide

The International Association for Suicide Prevention (IASP) initiated World Suicide Prevention Day in 2003. The day is co-sponsored by the World Federation for Mental Health and World Health Organization. The aim of the day is to research and collect data on suicidal behavior, determine the various causes and why its signs go unnoticed, and developing sound practices and policies for suicide prevention.

Dr. Keerti Sachdeva has rich clinical experience of more than 26 years as a psychologist. Dr. Keerti Sachdeva has been working as a Counselling Psychologist for more than 26 years. She has done her Ph.D. in Social Psychology from a University named Delhi University, her M.Phil. in Educational Psychology also from world-renowned University JNU, New Delhi, and her M.Sc. in Child Psychology from Bhilai. She specializes in children, adolescents, relationship hazards, and marital problems.

Dr. Keerti Sachdeva says, “Higher suicidal tendencies are seen in the age group of 10 - 40 ages. Adolescents age group is more prone as they have many challenges to face like-

So, the age group of 12 - 25 years of age is more prone to pressure and thus suicidal tendency.

Most people who committed suicide fall in the category in 12 - 25 age group which is adolescent age group.”

Depression  Sad  Fear  Seclusion  Demotivated  No desire to meet and talk  Anger  Crying  Not able to get up in the morning  Lack of appetite  Lack of focus in work Marks of the blade on skin  Starting to attempt suicide  Self-harm injuries on the body Talking about suicide Wants to stay alone  Negative talking   Feeling loneliness."

Dealing with the suicidal tendencies of a person

Is it that you feel like questioning the life that you have?

Is that you have less interest in life?

Do you feel that life is a waste?

Why are you sad, unmotivated, and tired?

These are questions to ask indirectly.”

Dr. Sachdeva says, “ If you have observed suicidal tendencies then do the following-

Consult the psychiatrist  After medications, counseling can be given  Consult the psychologist  Lifestyle changes  Dealing with cognitive side  Indulging in brain intellect activities  Change emotions  Change your behavior  Indulge in physical activities which help in charging you with happy hormones Reading for the thought process  Meditation music  Go for movies and holiday  Family and friends support  Family counseling”