It’s all about keeping the patient connected to their doctor says, Dr. Monika Mehta, Co-founder, and CEO, Zealth-AI 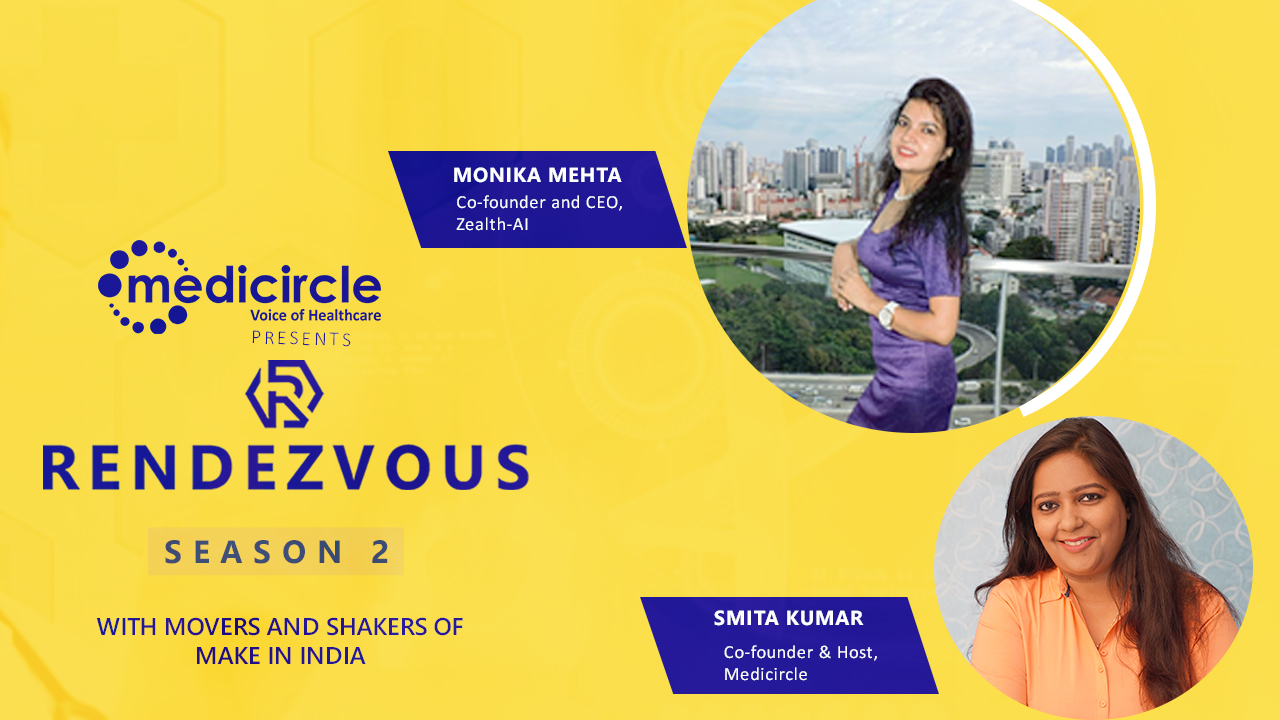 “When we asked them - Do you miss going to the clinic? They answered - Nobody wants to go to the clinic,” says Dr. Monika Mehta, Co-founder and CEO, Zealth-AI.

Artificial Intelligence (AI) is the branch of computer sciences that emphasizes the development of intelligent machines, thinking, and working like humans, speech recognition, problem-solving, learning, and planning. Now AI is being positively used in the healthcare industry.

Dr. Monika Mehta, Co-founder, and CEO, Zealth-AI, is a passionate head entrepreneur, working towards building the future of value-based healthcare. She has worked with some of the leading hospitals in Singapore and during her last job at a pharma company. She has led various oncology projects.

Zealth-AI’s mission is to empower patients, their caregivers as well as the clinicians they trust through the most robust remote patient monitoring platform.

Dr. Monika sheds light on the matter, “Our journey is more about the journey of me and my co-founder which was never born with a mindset that this is what we want to do. During my seven years in Singapore, I saw some gaps, for example, when it comes to India, there is no proactive health care, once things go wrong, that's when we realize now we need to go to a doctor or else we'll just take a paracetamol tablet on our own. Whereas here I used to feel that people are too paranoid, that they will go to the doctor for a simple cold but then I realized that's good because each and every symptom might be something really big, which we don't realize and that is with all the developed countries because they want to make it preventive. So the earlier you diagnose something, the better it is. Also, last year I lost my aunt as she had some issues with her pancreas for two years for which she took treatment from a hospital which was quite far from her place. But after she came back home, she would have certain symptoms once in a while which she ignored as we tend to ignore normal symptoms and didn’t go to the doctor till it she had severe stomach pain and was rushed to the hospital and the doctor explained that the symptoms that she was having once in a while every few months were to look out for. The doctor also mentioned that almost 80% of the cases that come to the emergency department come because they somehow miss basics symptoms. I was working with the company and I always wanted to build something on the grounds of continuous care, where the patient is connected with their doctor, so I joined the incubator program where I met my co-founder who had experience working for a healthcare startup in India and he was genuinely passionate about it. We started last year talking to doctors at hospitals and pivoted a couple of times before we actually came to what we are doing now. So basically Zealth is software that provides remote monitoring through an app that keeps you connected with your hospital, whichever part of the world it is and that data goes to the hospital in real-time. So if there is something abnormal doctor will contact you immediately. So it's more about providing continuous preventive care,” she says.

Dr. Monika explains, “There were three things; one was that in my family everybody is an engineer. In 11th standard when I opted for biology, I had to deal with my parents, they wanted me to be either an engineer or doctor but I didn’t want to. Then I joined the Hindu College, Delhi University for my graduation, even though I was very hardworking, my relatives were of the thought school that I am a girl, why do I want to go so far to study? So I somehow had this hatred developing in my subconscious mind and I wanted to prove that even though I am a girl, I can do something. So there was this motivation always.  Another reason is that I was always inspired by Kiran Majumdar. It was my dream to create a legacy that will be stay even when I'm gone. But people would know, no girl coming from a small place and doing something in the biology field. Third, was, when this series of events, happened I thought that maybe I should just do it. Working for a corporate, I realized that no matter how long you stay, there's never going to be a limit. So I was not happy that I was working 14 hours every day and not at all satisfied. So I would rather work on my own company. So I just decided to take it up, just take a leap of faith,” she says.

Dr. Monica talks about her experience, “I volunteered with FEA last year as I was very excited by what their motivation and vision were. They wanted to help students and I could immediately connect with it as when I was their age, I did not have any exposure to the outside world. So I believe that people can do a lot if they have the right knowledge if they have somebody to guide them, which I didn't have at a certain point. So what I have learned over the past 5-10 years, I can at least contribute something towards helping these people. So that was my motivation to mentor, they give a bunch of students to each mentor, and then you have to guide them every weekend and then they see how we are performing. So it was a pretty good experience talking to students, clearing their doubts, somebody didn't know what to do, somebody’s parents wanted them to opt for something else and so on.  And now, when I talk to students, they're thankful for the advice and help. So that satisfaction is really good,” she says.

Zealth helps in bridging the gap

Dr. Monica shares her views on whether extensive digitalization in healthcare is losing its personal touch, “When we talk about the digitalization of healthcare, there are two aspects of it. One, it has become a necessity now, for example, in pre-COVID healthcare; it has always been a very conservative industry. So it wouldn't have reached where it is now in terms of digitalization. The regulations were changed almost overnight to allow telemedicine because of COVID in India, which was pending for the last 10 years. But because of COVID, everybody realized digitalization is important. And so is right for the patients, because we work with a lot of patients. When we asked them - Do you miss going to the clinic? They answered - Nobody wants to go to the clinic. We feel the entire environment clinic is so depressing. You see the patients everywhere; you get those negative vibes, wait in a queue but now you can do everything online, you can connect with your doctor, and you can stay connected with a doctor. I haven't met anybody who has felt that they are not getting the personal touch. But maybe once COVID goes back to normal, there are a few examinations which you can't really do online, for example, stomach palpation, which cannot happen online.

For Zealth, the entire proposition is about it keeps the patient connected. So for example, every time a patient submits their information, they receive personalized feedback, they receive a personalized message from Zealth on behalf of their doctor. And that message is very encouraging to the patient. So although that's one of the positive feedback we get from our patient, like they feel connected with their doctor they feel that they get that peace of mind that somebody is looking after them so that they don't get even in the physical appointment because they will just go and then in between unless they follow up during those few weeks or months they have no connection with their doctor you keep them connected 24x7, so that is how we are bridging the gap where you do everything online, but you still feel connected with the world,” she says.