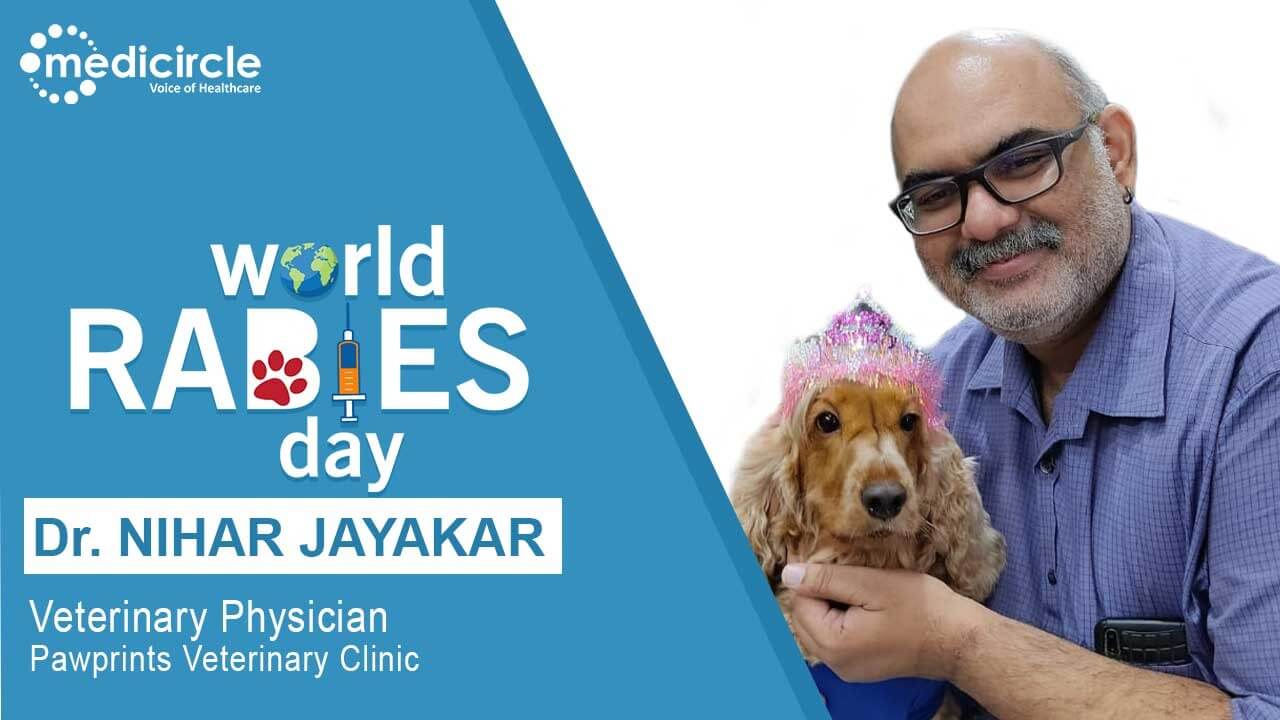 Learn from veterinarian, Dr Nihar Jayakar the advantages and the right age for vaccination for rabies. Rabies is a completely curable disease as long as timely vaccines are administered.

World Rabies Day is observed worldwide to mark the death anniversary of Louis Pasteur, the French chemist, and microbiologist, who developed the first rabies vaccine. To celebrate this milestone, this year’s theme focuses on facts about rabies and dispelling any myths or misconceptions. While rabies is a 100% preventable disease, more than 59,000 people die from the disease around the world each year. In India, rabies is a major public health problem that kills 20,000 people annually. The disease is endemic throughout the country with the exception of the Andaman and Nicobar Islands and Lakshadweep islands. On the occasion of World Rabies Day which is on 28th September, we at Medicircle, are conducting an exclusive awareness series wherein we will be featuring experts of this field to understand and create awareness about rabies and how to effectively cure it.

Dr. Nihar Jayakar has 19 years of experience as an emergency veterinarian in the Western suburbs of Mumbai. He is currently working at Pawprints Veterinary clinic. He has worked as an emergency gynaecologist and zoo veterinarian for a primate breeding facility as well as the La Vanille Nature Park in Mauritius between 2006-2008. He is very passionate about Exotic animal medicine and surgery with an emphasis on Dentistry and Orthopedics, Anesthesiology, and General Emergency and critical care.

Dr. Jayakar starts, “Rabies is a viral disease that occurs in dogs, cats, and all mammals. By vaccination, it can be 100% be cured. But if care is not taken then the disease can turn 100% fatal. It is caused by a virus from the Rhabdoviridae family. It is a bullet-shaped virus and can attack the nervous system of animals. A common misconception is that only dogs can get rabies. But even cats can fall victim to rabies. In my professional career, I have seen horses, cows, and even monkeys getting rabies. All mammals are susceptible, including humans.

Rabies occurs in two forms. The first is the ‘furious’ form where the dog keeps biting and the other is the ‘dumb’ form where the animal keeps seclusion, avoids light, goes into hiding, and maintains isolation.

Rabies cause paralysis of the esophageal muscle (food pipe). Because of this, the patient cannot swallow food or water. It also causes paralysis of the windpipe or trachea. Because of the paralysis in the vocal cords, the voice comes like a bark. This makes people think that when one the dog bites the person turns into a dog. The good news is that despite pre-exposure or post-exposure, rabies can be cured.”Susceptibility

He explains, “Children and adults are equally susceptible to it. The reason why children have more rabies cases is that they tend to venture out and play with stray puppies and dogs. Children are also an easy target for dogs. Another thing is when children get scared by an angry dog they start running which gives the dog a running instinct. So the dog starts running after and biting.

Many times they play with the dogs and cats and get bitten by them, but they fail to report it at home. Children fear the parents will scold them for playing with the stray and they don’t report back home. The first thing anyone should do is wash the wound with soap and running water and then visit the doctor. The physician can get you vaccinated.”

He says, “Rabies is a notifiable, communicable and preventable by vaccination. Generally, vets keep rabies vaccine at the minimum cost. This vaccine can generally be charged for 500 to 750 rupees per dose. For a small dog, two doses will be required, one primary and the second will be a booster. Whereas in older dogs annually one booster dose should be given. Vaccination starts at 4 - 5 months of age if the mother of the puppy is herself vaccinated. It is seen that the mother can transport immunity to the puppies.

For stray pets many vets give the rabies shot first as the immunity of the puppy and the mother is unknown. Later other vaccines are administered. Now the municipal corporations have made rabies shot mandatory for you to have a licence for your pet. The protocol post-bite is to give a shot on the day of the bite, 3 days later, 7 days later, 14 days later, 30 days later, 60 days later and 90 days later. This is called ‘Post-bite Rabies Protocol’ which is supported by WHO.”

The right age for vaccination

He recommends, “The age at which we prefer to vaccinate is four to five months of age. And then the booster dose is given annually. Unfortunately, we are not a rabies-free country so we have to give dose annually. Some countries give it every three years. So make sure your pet receives a dose annually. if you have a stray dog in your society then call NGOs to give them a vaccination.”