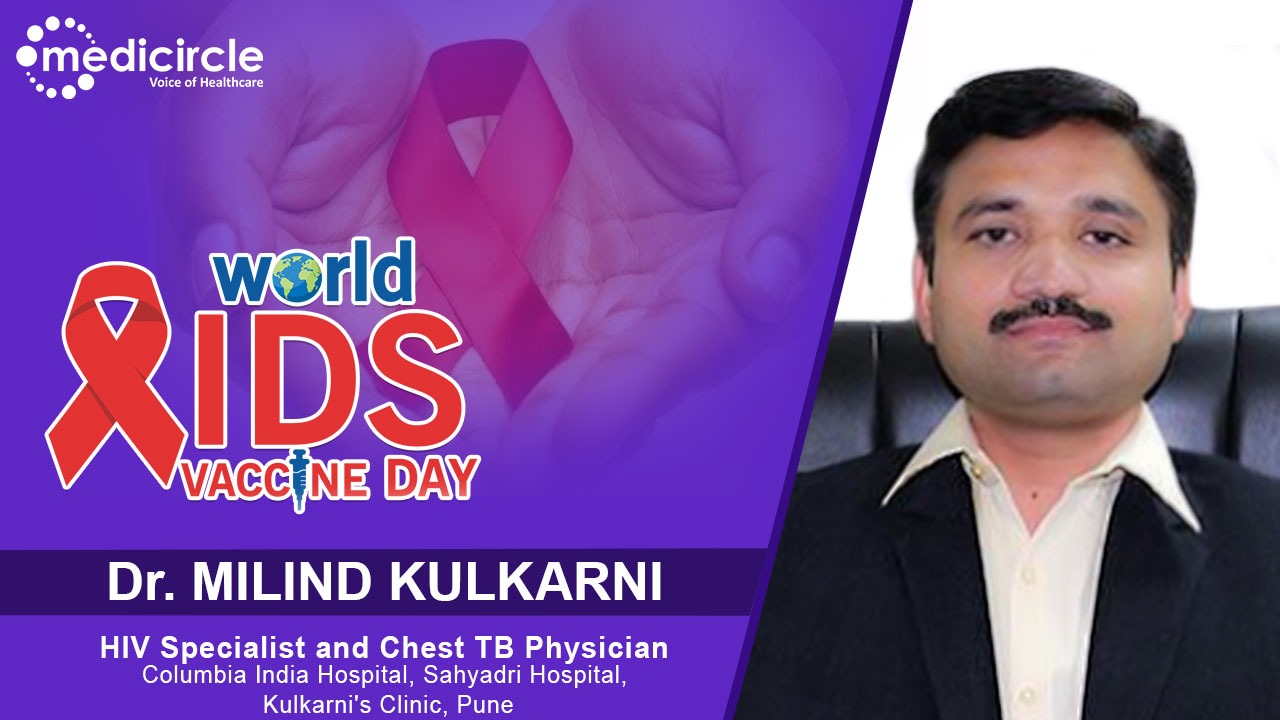 Dr. Milind Kulkarni, HIV specialist and Chest TB Physician explains how HIV weakens the body's immune responses, assures that AIDS is not a fatal disease anymore provided it is managed well and provides insights on the efforts in the direction of managing and controlling HIV, AIDS and approaches towards AIDS vaccine.

HIV was first identified in the year 1984. The U.S. Department of Health and Human Services announced at the time that they hoped to have a vaccine ready within two years. Despite many trials of possible vaccines, a truly effective vaccine is still not available. Medicircle acknowledges and thanks the thousands of volunteers, community members, and health professionals who are working together to find a safe and effective AIDS vaccine.

Dr. Milind Kulkarni is an HIV specialist and Chest TB Physician practicing in Yerwada, Pune, and has experience of 14 years of in these fields. He is currently associated with Columbia India Hospital and Sahyadri Hospital and also practices as Chest/TB and HIV/AIDS Physician at Kulkarni's Clinic. During his career, he has played several significant roles like Chief Consultant, Senior Medical Officer, and Senior Clinician, at NARI (National Aids Research Institute, Pune). He has been awarded scholarships from the European AIDS Clinical Society. He has attended and participated in a number of conferences on HIV medicine.

Dr. Kulkarni explains, “HIV infects a type of white blood cell in the body’s immune system called a T-helper cell (also called a CD4 cell). These vital cells keep us healthy by fighting off infections and diseases. HIV cannot reproduce on its own. Instead, the virus attaches itself to a T-helper cell and fuses with it (joins together). It then takes control of the cell’s DNA, makes copies of itself inside the cell, and finally releases more HIV into the blood. HIV will continue to multiply and spread throughout the body – a process called the HIV life cycle. In this way, HIV weakens the body’s natural defences and over time severely damages the immune system. How quickly the virus develops depends on a person’s general health, how quickly they are diagnosed and start antiretroviral treatment, and how consistently they take their treatment. Anti-HIV drugs target different stages in the HIV life cycle, so knowing how HIV infects the body can help you to understand the different prevention and treatment options,” says Dr. Kulkarni.

AIDS is not a fatal disease anymore provided its managed well

Dr. Kulkari mentions, “HIV is often thought of as an incurable, fatal illness, and it certainly can be without treatment--especially once a person's immune system is weakened to the point that he or she has AIDS. Without treatment, it takes an average of 10 years for someone who gets HIV to develop AIDS. Some people get AIDS much more quickly, while others do not get it until much later.

Dr. Kulkarni emphasizes, “A vaccine that can prevent infection would teach the immune system to respond to HIV by making antibodies that can bind to the virus and stop it from infecting cells, or by promoting other immune responses that kill the virus.

No vaccine is 100% effective, and this is likely to be the same for HIV. Some people who receive a vaccine will not respond strongly enough to the vaccine and will not be protected, as in the case of the seasonal flu vaccine. But finding at least a partially effective vaccine remains of critical importance for the HIV response, as all successful disease elimination strategies have included a vaccine among their arsenal.”

Other studies are testing HIV DNA vaccines. DNA vaccines are designed to overcome the problems of using whole viruses or attempting to engineer recombinant virus sequences that can stimulate strong immune responses. DNA vaccines deliver DNA that contains code for specific viral proteins. Cells take up the DNA and produce the proteins and these are recognized by the immune system, leading to stronger immune responses than vaccines based on viral vectors. Several DNA vaccines are in early-stage human studies.”

Efforts in the direction to manage and control HIV and AIDS

Dr. Kularni, explains, “Due to the complex nature and structure of HIV, locating and quantifying the amount of virus in the body is proving to be a daunting task.HIV evades the immune system by staying dormant in infected T- lymphocyte cells (T-cells) until they are activated to respond to infections. This state is called latent infection. Some of these cells may live for decades without becoming activated. Cells that are latently infected are described by scientists as the `HIV reservoir`. Detecting and eliminating these cells are the biggest challenges facing cure research.

He lists down following significant aspects related to HIV:

Studies have also shown that HIV does not only infect T-cells – the virus can also persist in macrophages, cells that are found in virtually every tissue in the body.  As a result, other sites in the body, such as the lungs, brain, and genital tract, are also important reservoirs of latently infected cells," says he.

Dr. Kulkari points out, "Within these two major strands of functional and sterilising cure research, there are five broad strategies of cure therapy currently being investigated. It is increasingly recognized that a combination of these strategies may be necessary for cure development. He lists down the following strategies:

Research is currently underway to determine the extent to which viral reservoirs can be emptied by combining antiretroviral treatment drugs and flush HIV from its hiding places. The idea is to force the dormant, infected cells to become active so that the body's own immune system or ARVs can destroy the last remnants of the virus. This approach has gained the name 'shock and kill'.A randomized trial that combined an HDAC inhibitor to `kick` HIV and a vaccine to stimulate immune responses to `kill` HIV-infected cells showed that the approach did not reduce the number of HIV-infected cells.

Animal research reveals that an agent called dCA stops the HIV protein Tat from triggering the process – transcription – that sets off the production of new viruses. If Tat can be suppressed, latently infected cells will not produce new viruses and the HIV reservoir cannot be replenished. Scientists have called this strategy `block and lock` because it blocks the production of new viruses and locks HIV up in latently infected cells. Human studies are needed to test whether this approach offers a viable route to long-term control of HIV without ART.

Stem cell transplantation has been investigated because it was hoped that replacing the bone marrow cells from which all other immune system cells are derived might eventually lead to the replacement of all immune system cells in the body with uninfected cells. This approach would need to be combined with the eradication of infected cells from the body. The cure of Timothy Brown is an example of stem cell transplant, although the circumstances are unique. Subsequent attempts to replicate this cure have failed. Multiple approaches have resulted in a significant reduction in the size of the reservoir after ART discontinuation, but HIV still persists in latent reservoirs within tissues that might not have been affected by the transplanted stem cells.

Approaches to gene therapy for HIV focus on the modification of cells that are targeted by HIV (such as the CD4 cells) – to render them resistant to HIV.  Other gene therapy strategies focus on cutting HIV from the infected cell. This is a relatively new field of opportunity for cure research – with an array of tools now at the disposal of scientists to disrupt genes. These include zinc finger nucleases (ZFNs), transcription activator-like effector nucleases (TALENs), and most recently, the CRISPR/Cas9 system,” informs Dr. Kulkarni.