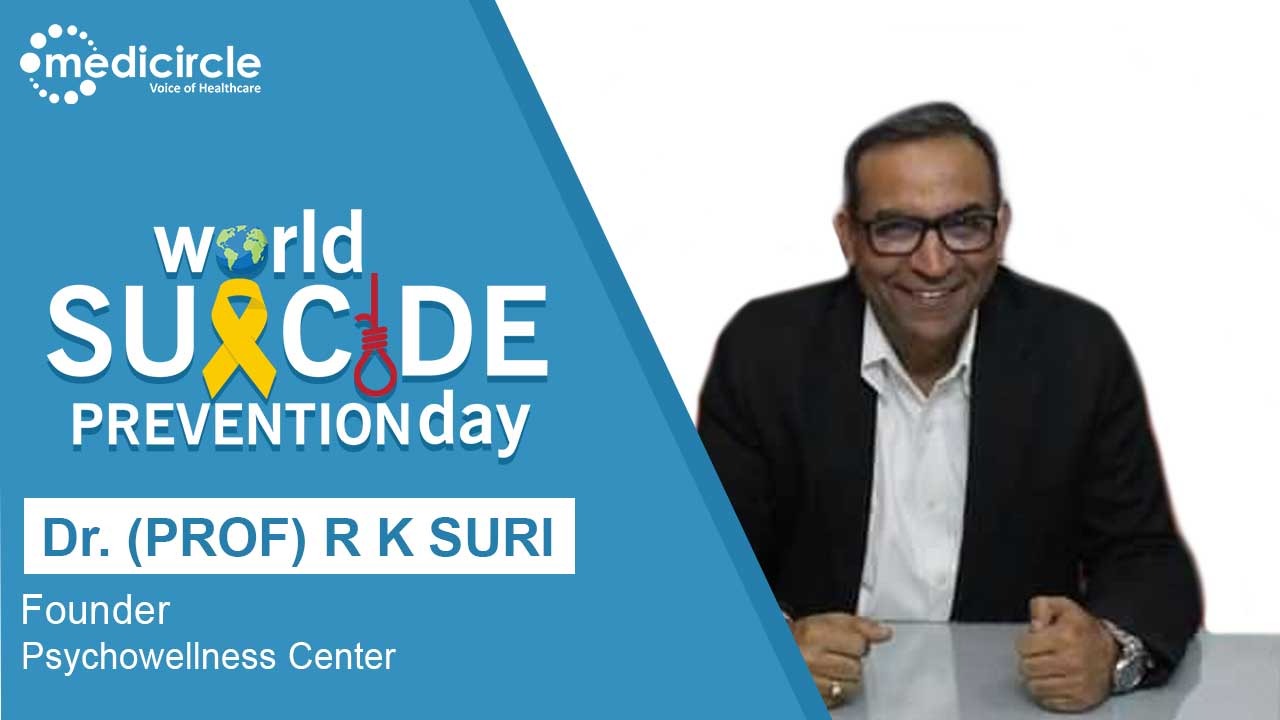 Dr.(Prof) R K Suri, Clinical Psychologist sheds light on increasing numbers of youth suicides and the possible reason behind it. Dr. Suri has also listed some warning signs of suicidal behaviors and urged the family not to take this lightly

We lead busy lifestyles and barely get time to sit and process our thoughts, which is likely a reason why mental health issues or underlying problems go unassessed. The majority of these occur in underdeveloped and developing countries. Undiagnosed and untreated mental illness is the biggest reason behind suicide. Every 40 seconds someone takes their own life according to the World Health Organization (WHO). That’s about 800,000 people worldwide every year - although some estimates put that number closer to 1 million. Suicide is the leading cause of death for people aged 15 to 29 and for every suicide that results in death, there are as many as 40 attempted suicides.  The International Association for Suicide Prevention (IASP) initiated World Suicide Prevention Day in 2003. This Year World Suicide Prevention day is documented on 10th September 2021. We at Medicircle are conducting the Suicide Prevention Day Awareness Series to understand create awareness about suicidal behaviors and how to effectively deal with and treat them.

Dr.(Prof) R K Suri is a trained professional chartered clinical psychologist, having more than 36 years of experience in hypnotherapy, psychoanalysis, neuropsychological assessment, career counseling, relationship management. Dr. Suri is a highly respected professional in the field of Cognitive Behavior Therapy (CBT) and Cognitive Hypnotherapy (CH), which combines gradual hypnosis with CBT. He is also an expert in the Neuro-linguistic Program.  He has been providing career counseling globally and has been providing counseling at IITs, IIMs, SPAs, for admission to Universities in the US, UK, Australia, etc.

The age group that is most suicidal

Dr. Suri explains, “Most vulnerable group for suicides is of the young adult which is 15-29 years age group. The second most susceptible group is old age that is the 60 plus age group. Today's young adults often face challenges in the form of career progression, settlement in life, competition. Earlier this was not the case. And thus, there were fewer chances of anxiety, stress, and depression in young adults with fewer numbers of suicidal tendencies and death. With increasing materialization, privatization, globalization, and commoditization, this vulnerable age group are at higher risk. Students who are in a highly competitive environment like significant high-ranking students are most susceptible because they are unable to handle stress and depression.

The second age group is old age, this age is a transition phase, retirement phase, there is an increase in physical ailments, feeling of worthlessness, hopelessness and loneliness are also there. They feel, their life has become purposeless. None of the class is left untouched by this feeling. Because of the pandemic, people were forced to live alone, this was also the very big reason.”

Dr. Suri explains, “There is a significant change in the pattern or behaviors in people getting suicidal thoughts. Loss of sleep. loss of appetite, suicidal ideation, helplessness, loneliness, isolation, depression, not getting socialize, becoming secretive, less communication, feel like lost, searching ways on the internet, life events (loss of job, relation, alcoholism, bipolar). If you notice a family history, emotional burnout, and significant changes in the behavior of a person, then take it seriously, there should be no error in terms of judgment and doubt because it's a matter of life.”

Dr. Suri advises, "We have to acknowledge them and we have to be with them. There should not be any judgmental comments, just give them the time or space, try to engage them in any activity, be nearby, give intimacy. You can take the help of a medical professional who can try to modify his behavior, thoughts, and feelings.”

Dr. Suri emphasizes, “I strongly recommend giving medications because it is very essential at that time. Antipsychotic drugs can be given under the guidance of medical health professionals. Whenever a person gets suicidal tendencies, don't take it lightly and seek medical professional help as early as possible. It's a very intricate matter where life is at the stake. Golden 10 minutes are very important, the person should be kept engaged. This will help in getting out of that feeling of ending life.”

Dr. Suri adds, “Person with the suicidal tendencies tries to commit suicide multiple times. They keep on trying until they succeed. They feel life has become purposeless and a burden. But in this tough time, the family should counsel them, should appreciate, empathizes, and motivate them. Family should make them understand the importance and existence of life.”