What if you could get a task done by just thinking about it? Now that is some breakthrough in the field of technology by Siddhant Dangi, President, CortexBCI Inc., and Deepansh Goyal, Treasurer and CTO, CortexBCI Inc 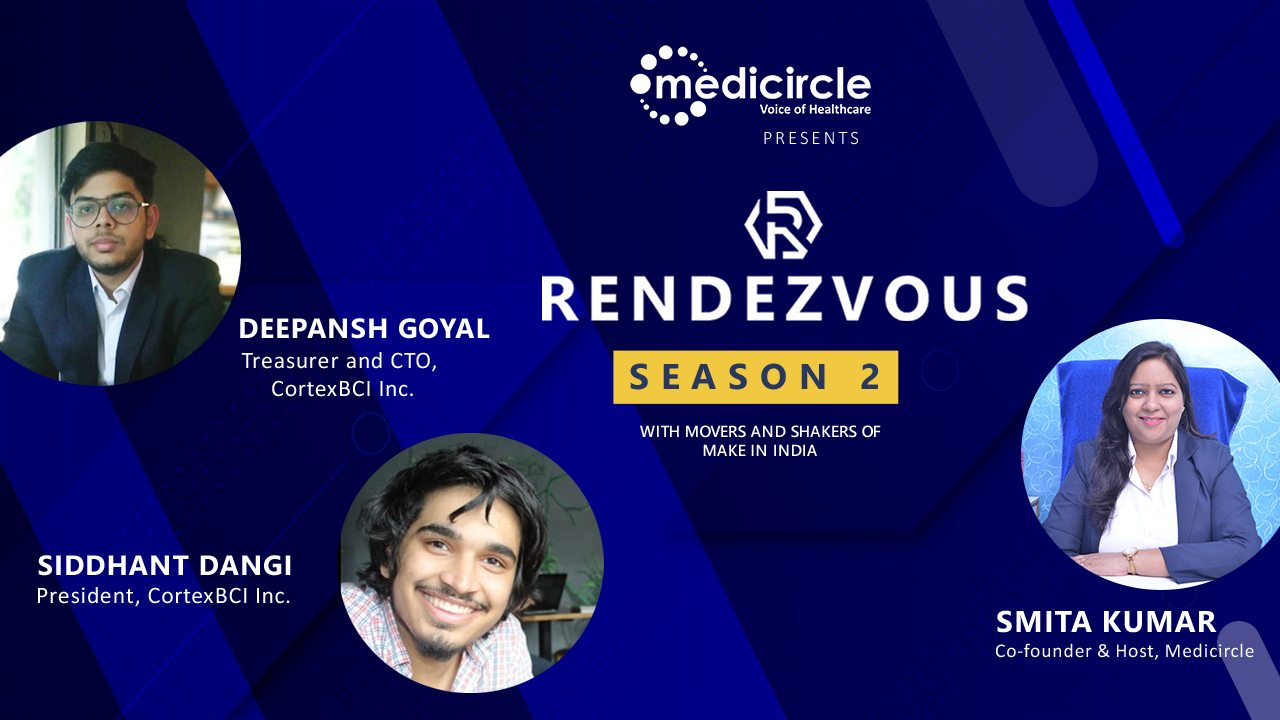 “And since we are continuously monitoring the EEG signals we are also able to predict the emotions, the moves, give you feedback on your mental health and overall on anxiety and depression levels of the day to day life,” say Siddhant Dangi, President, CortexBCI Inc., and Deepansh Goyal, Treasurer and CTO, CortexBCI Inc.

Picture a scene in which a cap with electrode sensors is fitted on to a person's scalp, connected to an electroencephalogram (EEG) scanner and activity from the person's brain can be recorded, and thoughts can be read, with a 98% accuracy rate. Then picture yourself focusing on removing that cap from your head and it actually happens! Now that is a technology breakthrough that is coming up in the market soon.

Siddhant Dangi, President, CortexBCI Inc., and Deepansh Goyal, Treasurer, and CTO, CortexBCI Inc., are engineers from BITS Pilani and they are on a mission to change how humans interact with machines around them and share the passion to explore the potential of the human brain. CortexBCI is funded by HostelFunds and these 2 engineers are working on a new-age technology company called NexStem.

NexStem works to enhance human capabilities by empowering the brain to seamlessly interact with machines and execute complex tasks with just a thought.

All you have to do is think!

Siddhant and Deepansh share their views on the vision and mission of their company NextStem, “Our brain is a very powerful machine surrounded by the fragile body, so the mission is to enhance the capabilities of the human abilities by removing the barriers of the fragile human body and the best way to do is to create a symbiotic relationship between the brain and the body. So you just have to think and not do anything with your body, you are thinking seamlessly and they do all the work for you, all you have to do is think!” they say.

Siddhant and Deepansh share their journey, “Our journey has been a roller coaster ride. When we initially got the idea of BCI - brain-computer interface, the first challenge was to get access to the EEG data, and because this field is narrow in terms of research, there is no publicly available database for EEG. So the only way for us was to get our own EEG device. We pitched our college for funding but at that point, we were told that the thing we want to buy is very ambitious so we went to Nagpur for a competition, the only expenditure we did was Rs 500/- on the travel ticket and we happen to win it and we received a cash price of Rs. 45,000/-. Now the cheapest EEG costs Rs. 96,000/-. So the only way forward was to design it ourselves. So we checked the internet, did some research, took help from open communities, and then we developed our first prototype of the headset which was able to capture the EEG signals, and that costed us Rs. 18,000/- and it had the same capabilities as the one costing  Rs. 96,000/- had. We used that to create a new concept that was controlling a robotic arm, just one action based on your focus levels, the harder you focus, the more the arm rotates. So that is how we started out and we continue our journey by going to many competitions and putting back the cash prize money into the company. So now we are ready and the prototypes are ready and we can bring this into the market and show it to the world, so we started looking for investment and we found it from Hostel Fund and Bit spark which is founded by the BITS alumni,” they say.

Idea is to help people with disability

Siddhant throws light on the matter, “I am from a defense background and I have been to the army hospital multiple times in my childhood. The biggest ailment I saw there was amputation and it stayed in my subconscious brain for years. I also have been working with robotics since a young age says 7th grade onwards. The ideas revolved around creating systems to help people with disabilities. Then I met Deepansh at BIT Pilani and we saw a TED talk by Greg Gage on youtube and there he was talking about EMG, which is an imitation from muscles so we went ahead and studied more about it. EMG has a lot of problems when it comes to working with the prosthetic arm and because of those problems we do not see every amputee with a prosthetic arm cause they are not feasible so we thought of why not take the controlling messages from the brain rather than muscles and that is how the idea came to us and when we talk about the scope of this technology, it can control literally any technological device like Alexa, a wheelchair, prosthetic arm, etc. And since we are continuously monitoring the EEG signals we are also able to predict the emotions, the moves, give you feedback on your mental health and overall on anxiety and depression levels of the day-to-day life,” he says.

NexStem to be a level up in the field of Healthcare

Siddhant and Deepansh share their thoughts on NextStem helping the healthcare industry, “The entire prosthetic arm instead of being an external device becomes an extension of the user itself. It becomes more real for example, a person in a wheelchair won’t require another person to drive him around, and the person can simply think and move around on his own. Next is paralysis, the biggest challenge is that there is a lack of communication between the patient and the doctor. So the patient is unable to communicate their emotions to the doctor by simply moving around a cursor on the keyboard by thinking of it and spell out what he is thinking about and that will create a channel between the doctor and the patient and even his family members. Also, BCI – brain computer-integration can be used for rehabilitation of autistic patients and it is able to predict epileptic seizures 1 hour before it sets in and of course, the mental health aspects are also there, we know what you think, we know what you feel, concentration, stress levels, and much more can be known,” they say.