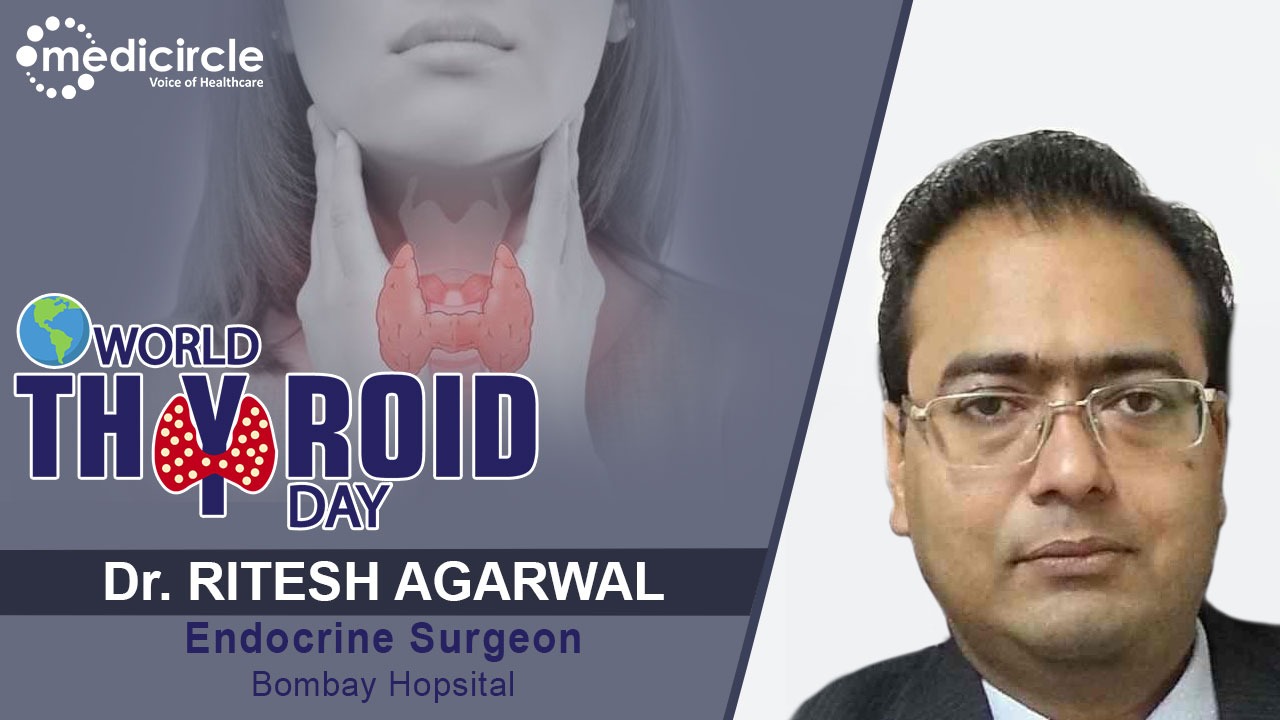 Any patient with thyroid disorder having hypothyroidism or hyperthyroidism is at more risk of any disease not only COVID as per their body profile. COVID is a virus-induced disease and virus can also cause dysfunction of thyroid hormones in later years of life,” informs Dr. Ritesh Agarwal, Endocrine Surgeon

Thyroid diseases are commonly global. India too carries a notable load of it. There have been a number of surveys in the last decade, which have indicated the explosive rise of disorders related to it in India. Medicircle is conducting a Thyroid Awareness Series on the occasion of Thyroid Awareness Month, with the purpose of increasing public knowledge about the importance of timely diagnosis, treatment, and prevention of this medical condition by speaking to the Specialists of this area.

Dr. Ritesh Agarwal is a Specialist Thyroid, Parathyroid, Breast Cancer, and Endocrine Surgeon. He has the honor of becoming the first M. Ch. qualified Endocrine Surgeon in the city of Mumbai and he is also among very few surgeons throughout India. He is an expert in doing all kinds of Thyroid and Parathyroid operations. He's among one of those Surgeons who are doing more than a hundred, thyroid and parathyroid operations per year. Dr. Ritesh is also socially active and has organized many medical camps, took health awareness lectures, and also is a part of the organizing team in many conferences.

Dr. Ritesh says, “There can be many reasons for thyroid diseases. First, we should understand, how it occurs. One of the important and foremost causes is Iodine deficiency. Now, every household is using Iodine rich fortified salt. In yesteryears around four decades back, there was very much iodine deficiency in India that resulted in lots of lumps like Goitre, higher prevalence of mental disorders and sometimes cancers also. Then the Government of India has notified that the salt in India should be fortified with Iodine after this lesser incidence of thyroid disorder were seen.”

Dr. Ritesh expresses, “Iodine deficiency is still one of the most important causes and is mostly seen in those areas where floods are very common like Himalayan terrain belt, interiors of Maharashtra and Andhra Pradesh.

The second is Autoimmune diseases. The body itself makes some antibodies against thyroid glands. It is situated in the lower neck. The gland has many biochemical components which are estimated only by blood tests. These are known as enzymes like thyroid peroxidase (TPO) enzymes and other chemicals like T3, T4, TSH, etc. TPO is necessary for the formation of thyroid hormones. Sometimes body treats this chemical as foreign material and makes antibodies against this chemical only, destroying this chemical and thyroid will not be able to perform normal functions of the body. So, in autoimmune disorder, immunity is self-induced resulting in the destruction of the thyroid components leading to thyroid disorders. This can be hyperthyroidism and hypothyroidism.

Lesser incidence of inflammation is also seen after viral infection. If a patient has a sore throat, upper respiratory infections, cough, it causes problems in thyroid leading to inflammation and problems in thyroid hormone level which is called Thyroiditis. Swelling in the neck called nodules can also be seen in some patients. It depends upon the patient’s profile like age, gender, heredity. After performing tests, one can conclude  and then further treatment is given,” talks Dr. Ritesh.

Vegetables of the brassica family have some effect on thyroid

Dr. Ritesh emphasizes, “As deficiency of iodine may cause thyroid disorder, hence the diet should be Iodine rich. Vegetables of the brassica family like cabbage, cauliflower has certain chemicals which are toxic to the thyroid enzymes. They cause interference in the thyroid functions and can cause lower production of thyroid hormones. But if it is a case of autoimmune disorder, there is no role of diet. So, these people can very well take these vegetables. So, it is very much important to find out the exact cause of thyroid disorder.”

Dr. Ritesh mentions, “Thyroid disorder is very common among ladies and even young girls. Approximately 3-4% of Indian population is having this problem which counts for 4-4.5 crores. The disease condition can be hyper (excess production of hormone) and hypo (lesser production of hormone). Females are having more of this disease as compared to males because females have different hormone cycles throughout their life. Right from attaining puberty to marriage, pregnancy, delivery, and then menopause, all these phases, change the thyroid hormone profile in them. That’s why thyroid disease is more prevalent in females.”

Dr. Ritesh adds, “Because of COVID, there can be a manifestation of any kind of thyroid disease. COVID is a virus-induced disease and the virus can also cause dysfunction of thyroid hormones, either hyper or hypo in their later years of life. Any patient with thyroid disorder having hypothyroidism or hyperthyroidism is at more risk of any disease not only COVID as per their body profile. COVID is a disease which can affect a person with abnormal body function and thyroid is also not an exception.”