Karishma Shah and Dr. Kalrav Mistry give their valuable inputs on Alzheimer's disease through mind diet 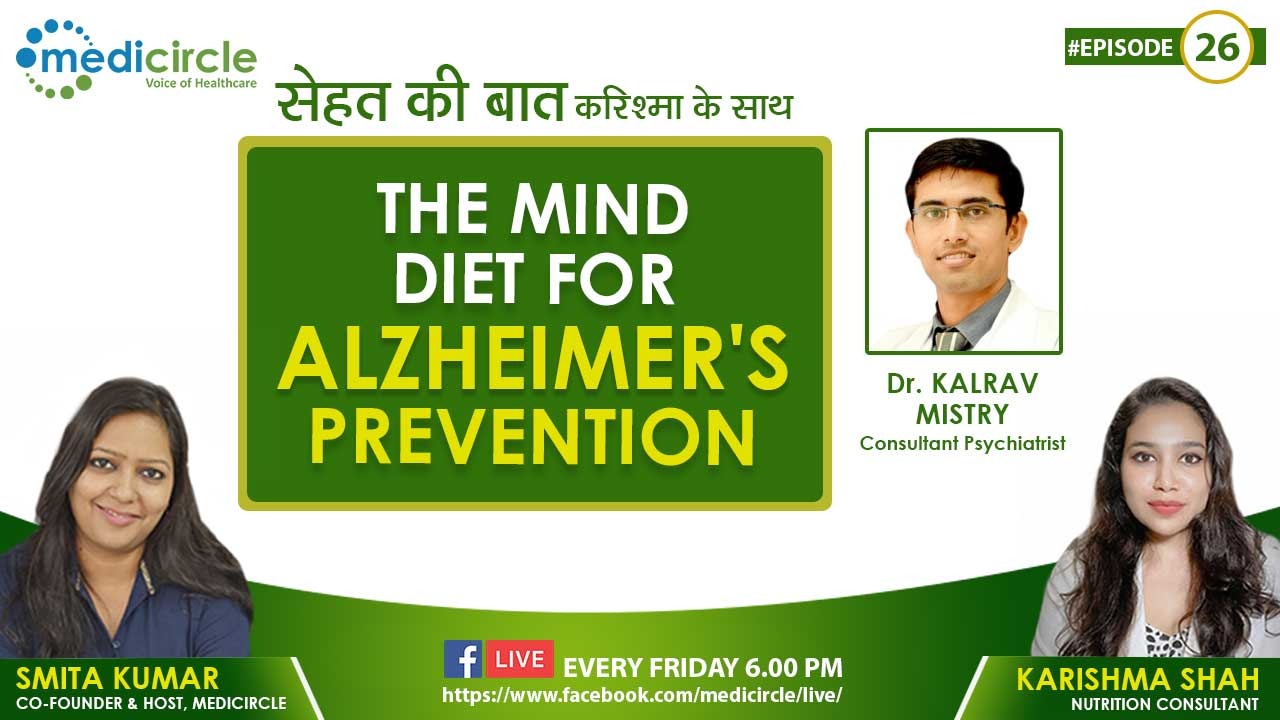 Let us explore about diet for Alzheimer's disease from the experts Karishma Shah and Dr. Kalrav Mistry at Medicircle. They address the problem from the root cause and try to solve it by treating dementia with early detection

It is a progressive disease that begins with mild memory loss and possibly leads to loss of the ability to carry on a conversation and respond to the environment. Memory problems are typically one of the first warning signs of Alzheimer's disease.

The number of people living with the disease doubles every 5 years beyond age 65. Younger people may get Alzheimer's disease, but it is less common. According to the WHO, 47 million people, or 5% of the elderly population suffer from dementia as of 2015. This will increase to 75 million by 2030 and to 132 million by 2050. According to global data, there are 16 countries in which 6% of all people 60 years of age and older suffer from dementia. India features in this. At least 4 million Indians are suffering from some form of dementia.

At Medicircle, we are presenting the Ask The Expert Series for health awareness to understand facts and find solutions related to them. We have come up with a series of Sehat Ki Baat, Karishma Ke Saath. Let’s interact with Expert Karishma Shah about Alzheimer's Disease

Karishma Shah is a Renowned Nutritionist and Plant Diet based Food Coach. She is also a Weight Loss Expert, Diabetes and PCOS Educator & Certified in Psychology of Eating

Dr. Kalrav Mistry is a highly skilled renowned psychiatrist, working as a Consultant Psychiatrist at SHALBY multi-specialty hospitals, Ahmedabad. Vast experience and has worked in the field of psychiatry for 8 years.

Dr. Kalrav Mistry is an extremely personable, professional, and approachable clinician with a sensitive manner, who can give highly expert advice on the full range of all types of psychiatric disorders related to child and adolescent psychiatry, neuropsychiatry, geriatric psychiatry, drug, and substance addiction as well as sexually related disorders.

Karishma Shah says, “There is a mind connection to health. Whatever we eat triggers our body. Along with our gut, our mind can also get inflamed. As per research, a scan of a patient with Alzheimer's disease may show inflammation of the brain which indicates that diet has not been taken care of. Alzheimer's disease should follow the following diet -

All you need to know about Alzheimer's Disease

Dr. Kalrav Mistry informs,” Alzheimer's Disease is called dementia as well. 40 % of people suffer from mental health illness from 16 - 65 years at some time in their life. This covid pandemic has increased mental health issues from 40 - 60 - 80 %. India is the most populated country where there are people prone to mental health conditions. Dementia is the 7 th cause of disability right now worldwide. In 2021, dementia would be the number 3 cause of disability in the country after diabetes and blood pressure. Dementia is a neurodegenerative disease. The brain cells decline which causes problems in -

Dementia starts at 55 - 6 years of age. After 85 years of age, everybody suffers from dementia due to hectic and stressful life which can be due to -

Dr. Kalrav Mistry informs,” Hormone function is very important in case of Alzheimer's Disease. The regular function of dopamine and serotonin is very important for the body. These are happy hormones and are responsible for our moods and feelings. These are all connected to the gut with brain reflexes. The nutrition we take affects our diet and is very important. Faulty diet habits have increased because of online digital and social connections among people. Brain and mental health are getting compromised. To prevent dementia, people are opting for a “Mind Diet.” We need brain sanitization as well which includes - healthy diet, healthy exercise, and good sleep.

Dr. Kalrav Mistry informs,” For dementia - Mind diet is very important based on Mediterranean and DASH diet which contains

This results in a reduction of Alzheimer's Disease.”

The ketogenic diet for Alzheimer's Disease

Karishma says, “The concept for ketogenic diet is favorable for brain diseases like  Alzheimer's Disease and epilepsy. The ketogenic diet is tough to follow. Keto means 70 % of good fat content and 30 % from vegetables and low carb foods. This makes insulin levels stable. This helps in the reduction of inflammation and this is how keto is planned. It is necessary to balance the “keto cycle”. A good balance is important instead of going on a complete ketogenic diet. This includes- Millets and fruits. The idea is to cycle it and balance the condition of  Alzheimer's Disease with a ketogenic diet.”

Karishma says, “All diabetics must be careful. There is newer age of young adults with mental health issues like

These patients should have awareness of Alzheimer's Disease prevention. Our mind is very fragile in thinking. It is important to follow-

Dr. Kalrav Mistry informs,” There are 3 stages of  Alzheimer's Disease-

These problems may lead to memory loss where you can be forgetful. Progressive he can collect the remote memory but forgetful in recent memory. Early pick up and diagnosis can control Alzheimer's Disease."