Dr. Chytra Anand, CEO, Kosmoderma Clinics explains, How Education of the masses and increased GDP spending can help tackle the challenges of healthcare 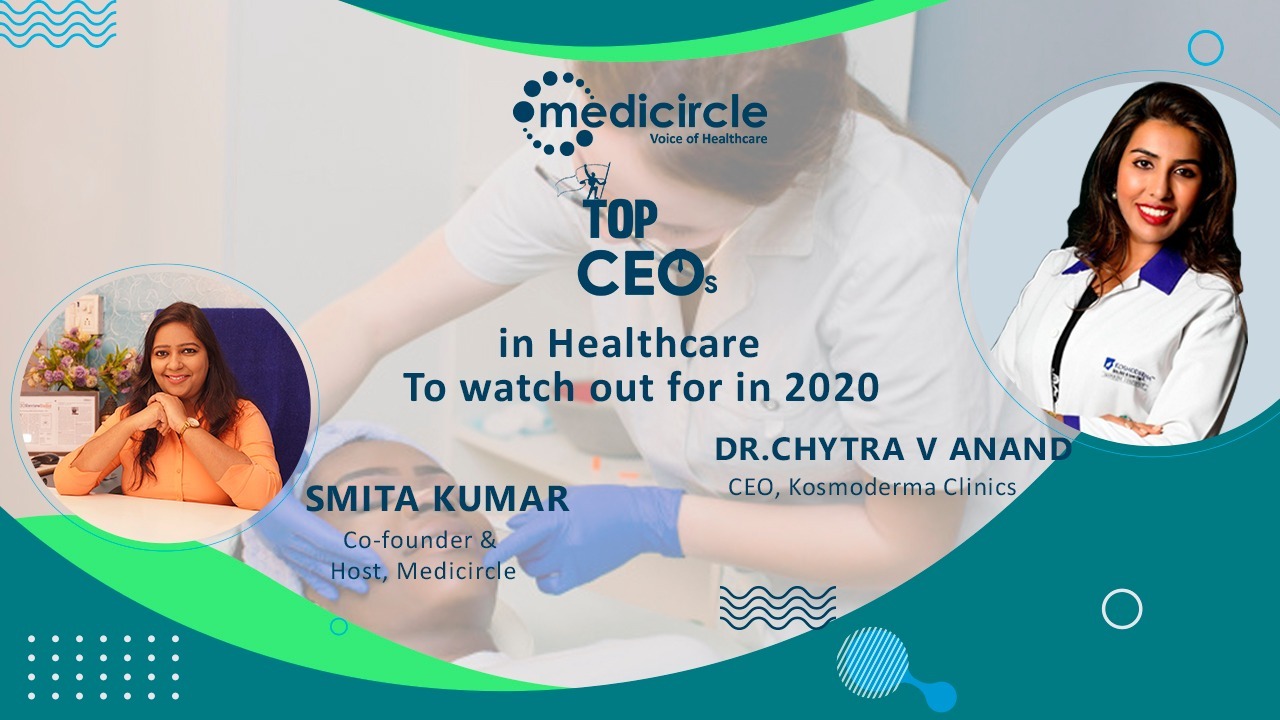 “Though COVID has been a disaster to the world, in a way it has been a small blessing to mankind because it has given people a chance to retrospect, reflect and adapt, though humans are such adaptive creatures, they're very resistant to change, till the whole mass movement happens” Dr. Chytra Anand, CEO, Kosmoderma Clinics.

Kosmoderma Clinics is dedicated to medical excellence in the field of Dermatology, both Cosmetic and general with international accreditations and facilities which offers scientifically proven treatments using US FDA approved technology.

Education and employment is the link to affordability

Dr. Chytra shares her views on the challenges of the healthcare industry, “Education would be the best way to eradicate accessibility, availability, and affordability; the reason is that the entire society needs upliftment. If we look at the number of people who actually pay taxes in India which is around 5%  is abnormally low. But until we get the people educated and working, they're not going to make enough money, and hence they're not going to be able to afford things. So if there's no affordability, the other two are not at all important. We need to work on that first, where we make education compulsory for everybody, at least to grade 12, and uplift our government schools. Once we do that, we're not just lifting them in terms of education or giving them a skill program but we're also giving them a lot of knowledge, which brings about an awareness which will also help healthcare eventually because then you have a set of patients that our healthcare practitioners are going to be treating, who are more understanding and aware, where it's easier to explain fundamentals to them, so that comes down to your affordability.’’ she says.

Dr. Chytra explains a possible solution to make healthcare accessible to all, ‘’Accessibility is a tough question, the reason being, 90% of the healthcare is centered around urban India, with penetration today into tier one tier two cities. But beyond that, if you look at rural India, where 60% of the Indian population lives today, the penetration is really poor. This is because the healthcare facilities there, the infrastructure is very poor, there are not enough doctors, nursing, or paramedical care. But even if you have doctors and other healthcare workers, they won’t be able to provide care-services without the necessary infrastructure. The  Aanganwadi, the Primary Healthcare Centre, and the Public-private partnerships are the areas where the government of India needs to concentrate on. There are remarkable hospital chains out there today, and they're also looking at the social impact of what their businesses can do and if the government really accepts doing a public-private partnership where these hospitals can provide subsidized rural care, that would be a fantastic way to take out accessibility. So it's a huge broad issue but everything boils down to two things: the education of the masses and increase GDP spending,” she says.

Where’s the money going to come from?

Dr. Chytra shares her thoughts on GDP spending, “It is true that Healthcare is a much-neglected sector.  The standard GDP spending should be on average of at least 5 - 6% for Healthcare in India, but even developing or underdeveloped countries are spending way more than we are on healthcare. However we have so much spending to do; like our road infrastructures are still not ready, now we have been able to get toilets into rural India due to Swach Bharat, but for the longest time open defecation was practiced. Then there are loan waivers, where are the loan waivers coming from? They're coming from the shrinking of our GDP. So if you proportion, let's say 5% of India's GDP, towards health care, and then you've given a loan waiver of thousands of crores, where is the money left to spend anywhere else? We can always spend more, but unless we make more, where’s the money going to come from?. So here is where we can get support from Corporate Social Responsibilities –CSR activities. Health care companies with a certain turnover can spend a part of their CSR or the entire CSR on rural healthcare development, and then use that fund directly there and give some tax rebates. So that way, you have a direct source working there, because it will be challenging for the government to manage it at the end of the day. Clearly, they're not doing a good job with government schools right now as nobody wants to send their kids to government schools, so why would anybody want to go to a government hospital?” she says.

Success is not instantaneous, it takes time

Dr. Chytra speaks on winning many accolades, “I've been very fortunate. But I always believe that if you work really hard, if you're working towards the goal, and you have an honest intention, good things will happen. That's my mantra and I do believe in karma. Your success is not instantaneous, it takes time. I do mentor youngsters and a lot of female entrepreneurs who aim to reach somewhere in a specific timeline, to them my question is, what are the goals? So always start with an idea of the goal of where you want to go, and then work backward and get a plan and work towards it, it's very easy to get distracted, especially for female entrepreneurs, because in our life cycle, we're a daughter, a daughter in law, a wife, a mom, a mother in law, there are so many things happening in our life-cycle and especially when you have the whole responsibility as a mother, it can be very distracting to a full time working professional. And so we have to get really smarter with the way we work and be really focused with no time to waste because whatever extra time you have, you would spend it with your kids. Everybody has their struggles and you just have to believe it, be strong, be brave, and fight through all of it. Also, I believe that the system needs a revamp, like telemedicine which until COVID was actually illegal in India, but because of COVID, the government suddenly brought it and if they had drawn it out in 2015-16, telemedicine would have had been the way that rural India could get medical care from, as everybody has access to a cell phone according to the telecom data,” she says.

Dr. Chytra sheds light on the future of healthcare, “Future is online, artificial intelligence and robotics. There's already IBM Watson. It's this six supercomputer where they've done this whole dermatological program, where it gets you to feed in the data as symptoms, and the computer will give you a diagnosis and a prescription. Also, it is 98% accurate. And then in radiology, they already have AI coming where they fed the CT scan reports, MRI reports, and AI can actually read and decipher their scan reports and give about 96.8% accurate results, which is 2% more accurate than humans. So the future is going to be faster, quicker, easily accessible. As today people don't have to visit the doctor to check their pulse rate, as all devices are available at home like a thermometer, home oxygen meters, BP machines, etc. Earlier at Kosmoderma clinic, we were trying to get the patients to review the post-procedure online to which they used to decline and insist to see us physically for a 5-minute check.  But now the consultations happen online and the patients are comfortable. So the change is already here and most people have adapted to it. Though COVID has been a disaster to the world, in a way it has been a small blessing to mankind, because it has given people a chance to retrospect, reflect and adapt, though humans are such adaptive creatures, they're so resistant to change, till the whole mass movement happens” she says.