Dr. Renuka Gupta talks about Ovarian Cancer and advises women to not neglect themselves after menopause as old age is the time of onset of ovarian cancer in most cases 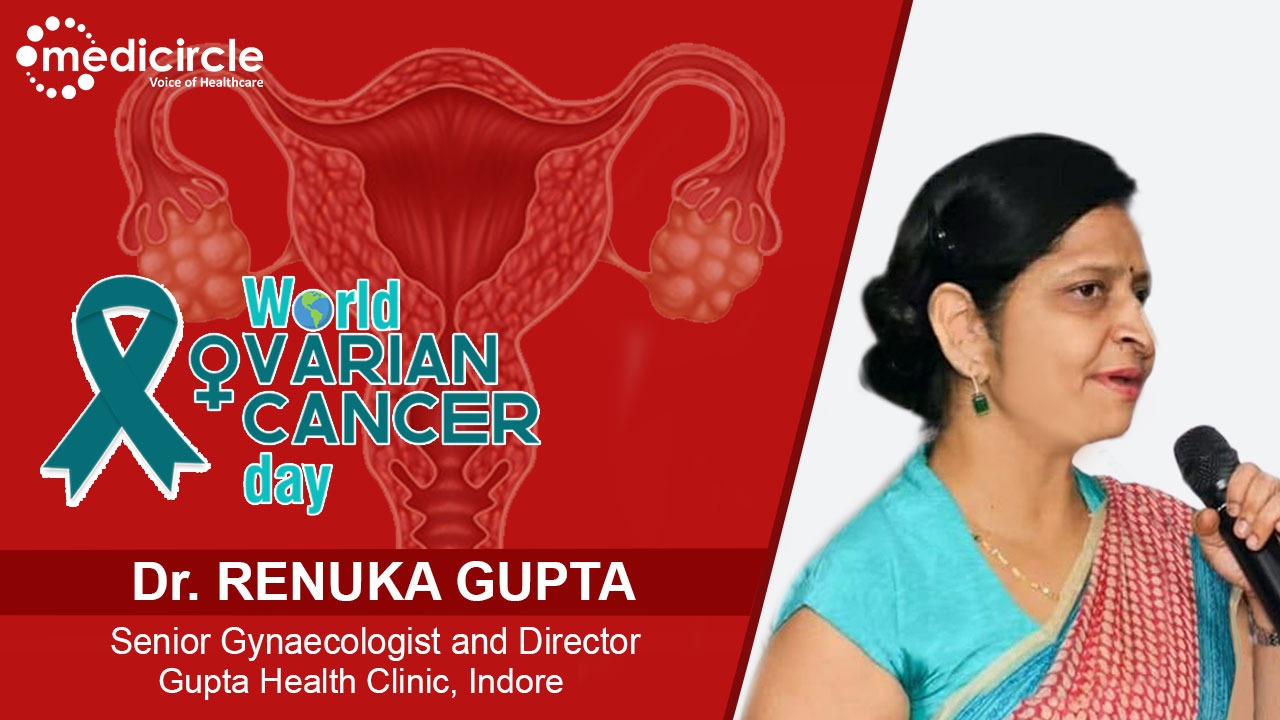 Dr. Renuka Gupta points out that ovarian cancer is a silent condition and 100% safety is not guaranteed as there are genetic predispositions attached to it that runs in the family. She clarifies that contrary to belief, obesity and infertility drugs do not have any direct link to ovarian cancer.

Although ovarian cancer may occur at any age, it is more common in older women, in the age group of 50 years and above. India has the world’s second-highest ovarian cancer incidence. Since the 1980s, there has been a growing drift of ovarian cancer in our country. Medicircle is conducting an exclusive series featuring eminent oncologists and specialists so that people can get direct and more reliable information from them.

Dr. Renuka Gupta has been practicing Gynaecology for the last 15 years at Indore. She is the Director of Gupta Health Clinic and her areas of interest are infertility, laparoscopic surgeries, and high-risk pregnancies. She has been associated with Bombay Hospital and Hinduja Hospital in the past.

Dr. Renuka explains, “A cyst is a fluid-filled cavity. If it is in the ovary, it's an ovarian cyst. The female body tends to make an ovarian cyst every month. Every month a female gets ovulation. Ovulation is a process in which the follicle which has fluid-filled inside it, gets ruptured. When there are ruptures, the female gets menses and the fluid goes away with that. Sometimes it does not rupture and the fluid keeps on collecting and collecting and it takes the form of a cyst. The ovarian cyst can be benign, meaning functional. A functional cyst is filled with hormonal fluid. Cyst can also be pathological – means it will be filled with solid elements and can be called a tumor. A hormonal fluid-filled cyst is not a tumor and can be managed by different modes like medicines, conservatives, surgery, etc. So every cyst is not a reason to panic.”

One can very well go ahead with infertility treatment, without fear of ovarian cancer

Dr. Renuka mentions, “When there is ovulation, there is rupture which leads to menses. This keeps on happening month after month. It is a hypothesis that repeated trauma can cause cancer. So, by that hypothesis, ovulation itself is a risk of cancer as there is trauma through repeated ruptures.

Obesity is not a very high-risk factor of ovarian cancer

Dr. Renuka says, “A high-fat diet is always considered a risk factor for different types of cancers. But even these do not have any strong association with ovarian cancer. Even if it leads to cancer, it is a very low-grade, low-risk cancer. It can be diagnosed very early and managed very easily. Overweight is associated with other cancers like endometrial cancer but it is not strongly linked to ovarian cancer.”

Dr. Renuka advises, “You can take many measures to prevent ovarian cancer but 100 % safety is not guaranteed because many ovarian cancers are genetically related meaning the mutation is in the family. So, if there is any type of cancer in the family, be it ovarian, breast, pancreas, colon, etc, the offspring have a risk of acquiring it. Particularly one gene that needs to be mentioned in this context is the BRCA gene. If it is positive, then there are 80% chances that the daughter will get breast cancer too if a mother has suffered from it. Also, there are 40% - 50% chances that she will get ovarian cancer. Any surgery will not 100% protect. What we can do is that after the age of 45, after a female has completed her reproductive life, we can remove the ovaries. It will decrease the chances but complete elimination of the risk of ovarian cancer is not possible.

Other preventive measures are pregnancy and breastfeeding. And if you are going for surgery to remove the uterus, simultaneously, you should remove the tubes even if they are healthy, because keeping the tubes increases the risk of ovarian tumor. So by removing the tube at the time of hysterectomy, we protect the ovary in the long term as it is responsible for increasing the risk of ovarian cancer. So, these are the things that we can do as a preventive measure.”

Women should not neglect their well-being after menopause

Dr. Renuka emphasizes, “The onset of ovarian cancer in women is generally between 60 to 65 years of age. After menopause, women generally start neglecting their bodies. This is the thought process that needs to be changed. Instead of neglecting themselves, they need to take care of themselves. They should routinely go for investigations and ultrasound as the onset of ovarian cancer is very silent and if the malignancies are detected very late, then it is difficult to manage. Routine health checkups would help in picking up the problem at a very early stage and morbidity and mortality will be very less even if cancer gets detected."