From a sure shot killer, HIV is now a chronic manageable illness – Dr. Ameet Dravid 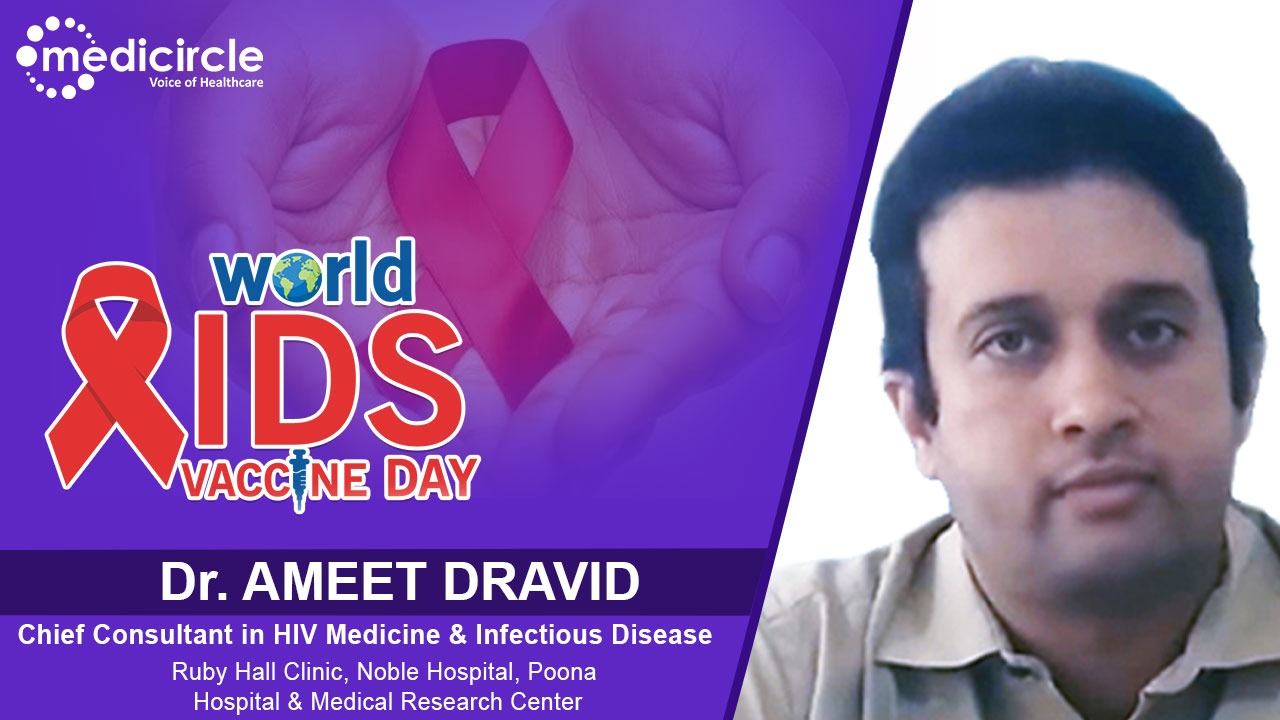 AIDS is not a diagnosis of death but a disease that can be managed by taking antiretroviral drugs without any gaps; year after year. If you do so, AIDS cannot kill you and you can not transmit HIV to your partner, says Dr. Ameet Dravid, Chief Consultant in HIV Medicine and Infectious Disease.

HIV was first identified in the year 1984. The U.S. Department of Health and Human Services announced at that time that they hoped to have a vaccine ready within two years. Despite many trials of possible vaccines, a truly effective vaccine is still not available. There is an urgent need for a vaccine to prevent HIV infection and AIDS. Medicircle acknowledges and thanks thousands of volunteers, community members, scientists, and health professionals who are working together to find a safe and effective AIDS vaccine.

Dr. Ameet Dravid is the Chief Consultant in HIV Medicine and Infectious Disease at Ruby Hall Clinic, Noble Hospital, Poona Hospital and Medical Research Centre, Pune. He has made a significant contribution to the research and treatment of HIV, AIDS. He has a proven track record of treating patients with best practices from district to international levels.

Dr. Dravid mentions, “HIV does not show any symptoms for 8-10 years after it enters the body. My patients say that they have been feeling ill for 6 months only, “how can the virus be in the body for 10-15 years”. This is possible as HIV is a clever virus. When it enters the body, it becomes a part of the DNA of CD4 cells that are responsible for the immunity of our body and becomes a part of those cells. It enters all the body parts gradually, replicates itself, and starts killing the immune cells in different organs like the liver, bone marrow, lymph nodes, etc. Over time, every year, the CD4 cells start coming down in numbers by 80 to 100. When the reserve of CD4 starts getting down and comes at a critical level, then opportunistic infections start getting triggered. In the 8-10 years of the incubation period, people are in the asymptomatic phase. If the CD4 count comes down below 200, then there are chances of AIDS and other ailments like TB, herpes, gastrointestinal problems, cervical cancer, lymphoma cancer, etc. So, immunity is extremely important. If immunity levels are high, even if there is HIV, nothing will happen. It's only when the immunity levels come down that viruses attack. If the CD4 count comes down to 50 and below, then it’s serious trouble. Manifestations of HIV can be controlled from 6-15 years as per the immunity levels of an individual.”

HIV is not a universally fatal diagnosis

Dr. Ameet emphasizes, “HIV was a universally fatal disease in the era of 1990 – 2000 when we did not have treatment options. In 1995 first anti-HIV (antiretroviral) drug got available and in 26 years, 29 drugs of 6 different classes have got created. Now, we are offering a combination of multiple drugs known as highly active combination antiretroviral therapy. It helps in suppressing the HIV viral load and the CD4 count starts increasing. If there is a timely diagnosis then one cannot die for decades from HIV. In the US, doctors assure that if treatment is followed properly, then one can expect to live for 50-60 years after diagnosis. This can happen in our country as well provided, 95% and above doses of medication have been taken by the patients without any gaps. We observe in our practice that people take medications for 5-6 years and they stop taking them as they get bored of it or get casual about it. But this tendency is fatal. If treatment is followed as prescribed, AIDS is not a diagnosis of death. From a sure shot killer, it is now a chronic manageable illness. HIV is like diabetes and blood pressure now. If you follow treatment, visit the doctor regularly, HIV cannot kill you,” says Dr. Ameet.

Dr. Ameet informs, “Just one or two people in the world have got cured from HIV. The first person to be cured was Timothy Ray Brown who was affected by both cancer as well as AIDS. That person went for a bone marrow transplant for cancer and after that, it was observed that the HIV viral load was also not getting evident. Upon study, it was found that the donor whose bone marrow was used for Timothy had a rare genetic mutation known as delta 32 mutation which is naturally resistant to HIV. This mutation is rare and can be found in 1 in 10,000 people.”

Dr. Ameet further mentions, “Many patients who come to me demand a curative treatment like that but it is very difficult to provide that because of the problem of finding the rare delta 32 mutation and there is a huge cost of such treatment; about 20 lakhs INR. For those who can afford that amount, for them too, it is hardly advisable because it has been found in the US that after the same strategy that was applied on Timothy in 8 other patients, 6 of them died of infections or other complications. Hence spending so much money over something that does not promise a high chance of life expectancy is difficult.”

Dr. Dravid highlights other case studies, One, is of a Mississippi baby who was born with HIV in the US. Within 72 hours of birth, antiretroviral therapy was started and it continued for 3 years and then stopped as viral load came down. After about one and a half years, the viral load did not come, and then again, the virus started getting evident in the child. He cited another case study in which people were given antiretroviral therapy within the first 3 months of the virus that entered the body. This therapy continued for 5 years. Dr. Dravid mentions that this is called Functional cure in which the HIV gets detected quite early and treatment starts immediately. It has been observed that in such patients after treatment of 5 years, the medicine was stopped and viral load was not identified for 2 years after that.

“Experiments like these are going on, I look forward to a day when complete cure from HIV is possible. It will take 15-20 years for a proper curative option to be available, hence taking treatment regularly is the only option. Due to the Covid epidemic, all research is happening in the direction of Covid and hence the curative options of AIDS can lag behind a little more. Gene therapy research is also going on to make CD4 cells naturally resistant but this will also take 10-15 years more,” says Dr. Dravid

CD4 cell count can be increased with medication

Dr. Dravid mentions. “A normal person has the CD4 count between 500 – 1500. If treatment starts timely in people with HIV, then CD4 count can be increased. Viral load can be lowered. If CD4 count does not go above 500, there can be damage to other organs and ailments related to the heart, kidney, lung, liver, gut, etc. Non-infection complications could be, heart attack, kidney failure, liver failure, and so on. With early diagnosis and early treatment, CD4 count can be brought up to the levels of a normal person.”

Dr. Dravid mentions, “There is a new catchword these days U=U, which means Undetectable = Untransmittable. This indicates that if you are taking treatment regularly and if you are keeping the viral load suppressed or in other words making it less than the detectable limit, then you cannot transmit HIV. In such cases one can have intercourse with a partner even without a condom, free from the fear of transmitting the disease. In some European countries, doctors have been assuring that if the viral load is at an undetectable level, then, you can have intercourse with your partner without a condom as in such circumstances there are no chances of transmitting HIV to your partner. We do not advise this in our country and recommend condom use because, by the use of a condom, people would remain protected from other sexually transmitted diseases as well."

"Our country’s priority should be to identify all HIV patients, start treatment immediately, monitor viral load, and keep it suppressed by antiretroviral therapy. This will help in not only treatment but prevention of AIDS as well. Automatically new cases would stop coming up,” says Dr. Dravid.