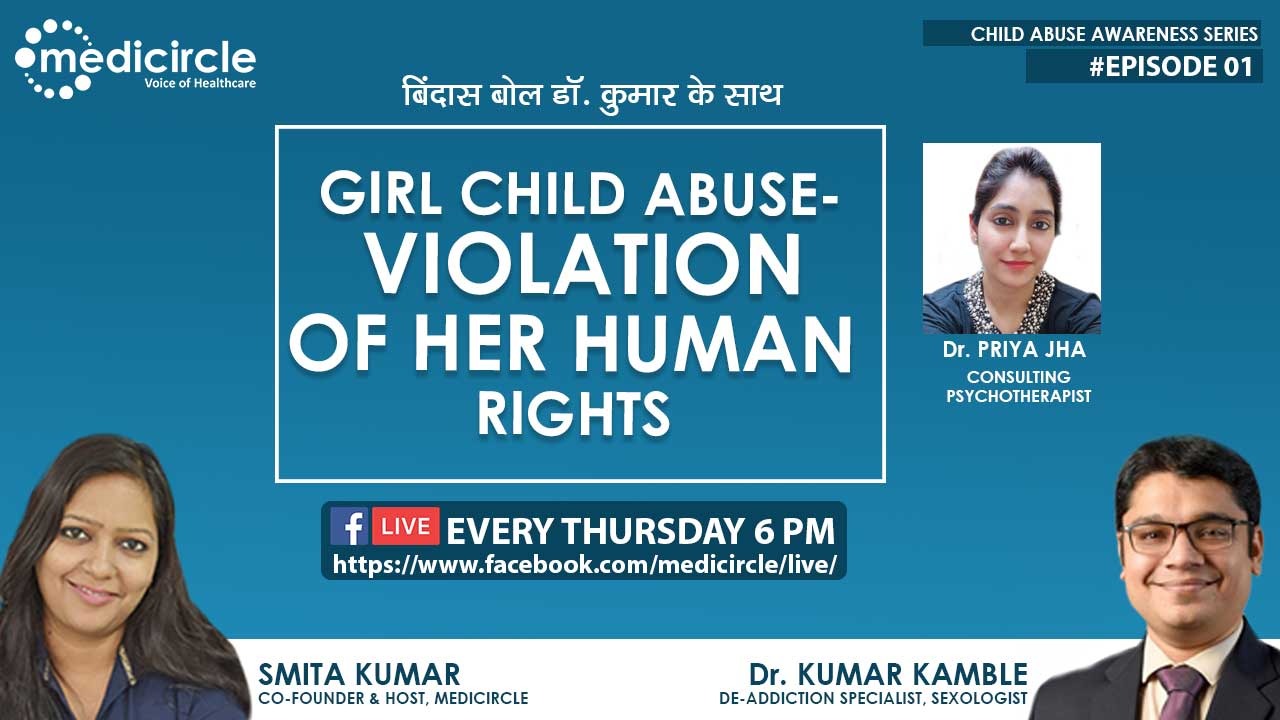 Dr. Kumar Kamble and Dr. Priya Jha give valuable insights on girl child abuse and tips for parents to make their children aware of sexual abuse. They further illustrate the impact of these activities on a child’s growth and development. Watch the video to know more about child abuse

The global prevalence of child sexual abuse is estimated at 19.7% among women and 7.9% among men. Sexual abuse is the result of abusive behavior that takes advantage of a child’s vulnerability. Overall crimes against children have increased steeply over six times in the decade over 2008-2018, from 22,500 cases recorded in 2008 to 1,41,764 cases in 2018, according to the NCRB data from 2008 and 2018. Children in Assam, Andhra Pradesh, Bihar and Delhi reported the highest incidence of girl sexual assault.

Children constitute 40% of India's total population, but according to a study, India is at number 6 in the series of countries unsafe for children. In 2007, the Ministry of Women and Child Welfare, supported by the United Nations Children's Fund, conducted a study to understand the magnitude of child abuse in India, they found that 53.22% of children have gone through one or more forms of child abuse, including the percentage of boys who were abused was 52.94% and that of girls was 47.06%.

According to data by the National Crime Record Bureau, a total of 109 children were sexually abused every day in India in 2018, which showed a 22 percent jump in such cases from the previous year. As many as 21,605 child rapes were recorded in 2018 which included 21,401 rapes of girls and 204 of boys, the data showed. The highest numbers of child rapes were recorded in Maharashtra at 2,832 followed by Uttar Pradesh at 2023 and Tamil Nadu at 1457. According to data, the number of child abuse cases reported was progressively more during the lockdown months, hinting that children were vulnerable to abuse despite being locked up in their homes surrounded by their immediate families. Research has shown that children who experience early childhood trauma, abuse or neglect are more likely to go on to develop profound and long-lasting mental health problems in adulthood, such as complex PTSD.

Dr. Priya Jha is a consulting Psychotherapist and has her clinic in Mumbai. She conducts all treatment modalities as therapy for her patients at her clinics namely behavior therapy, analysis, CBT, behavior modification. She is a motivational speaker having addressed crowds at corporate-like Saregama, Spykar, etc

Dr. Priya expresses, “This topic of abuse transcends social-economic status and affects every section of society. With this pandemic, there were changes in the lifestyle and culture of our everyday habits. Everyone had their struggles to deal with.”

Dr. Priya states, “There can be several reasons for child abuse and it starts with

Neglect - Not being able to provide or meet a child’s needs can be termed child neglect. Needs can be psychological, emotional, physical, etc.

Physical and sexual abuse – Physically hurting the child and sexually abusing them.

Emotional abuse – This includes post-traumatic stress disorder (PTSD). It is a mental health condition that's triggered by a terrifying event - either experiencing it or witnessing it. Everyone has a different coping mechanism; some move on easily and many take time. Physical wounds may heal but emotional wounds don’t heal so easily. It can have substantial long-term effects on a child’s mental health and it can also hamper the child’s physical and cognitive development. It can affect the child's personality to a greater extent with low self-esteem and self-hating. They start out being negative and dangerous.”

The result of many analyses shows that sexually abused females show early onset of puberty, cognitive deficits, depression, and dissociative symptoms, and many other problems.

Dr. Kumar expresses, “Child abuse and neglect are very common. They impact negatively on a child's overall growth and development. Symptoms of this include

The child may experience a decline in their academics with poor performances.

Young people can express their problems in front of doctors but children are unable to express them as they are not aware of such things. It impacts the emotional, psychological and physical state. Immediate impact can be seen in the academics of a child.”

Parents should make their children aware of child abuse

Good touch and bad touch - Children need to recognize the difference between good and bad touches. Parents need to introduce different parts of their bodies to their children. Parents need to make their children understand that no one should touch their private parts and no one should touch others, as children do not understand words like assault.”

Dr. Priya adds, “Smart thinking and strong character - Parents should educate the children regarding the mindset of people. They should teach negative human emotions like lust, greed which can lead to criminal activity. Inculcate in your child effective personal safety skills, smart thinking, and strong character. Tell your children to trust their instincts. This way the child will sense these negative emotions and can help themselves.

Encourage open communication -There has to be great communication between parents and children regarding small things. A parent is the best person to teach a child about personal safety. To gather information about the child, parents can start opening up about themselves and take the child in confidence. Make them comfortable so that the child tells all their secrets to you.

Parents need to first open up - Parents should not ridicule the girl child. Even a girl child should be comfortable to convey all her secrets and talk to her parents. Parents need to win trust first. Be a friend to them and don’t judge.

Dr. Kumar says, “Seek professional help - If parents are not able to communicate, take the child to a mental health professional for further counseling and help.”

Dr. Priya advises, "Life is very beautiful. You can’t base your whole life just on one instance. It was a trauma. It wasn't your fault. So, don’t harm yourself. Maintain positivity, talk to your parents, siblings, friends. Only you can help yourself by finding solutions. Be strong and be aware.”