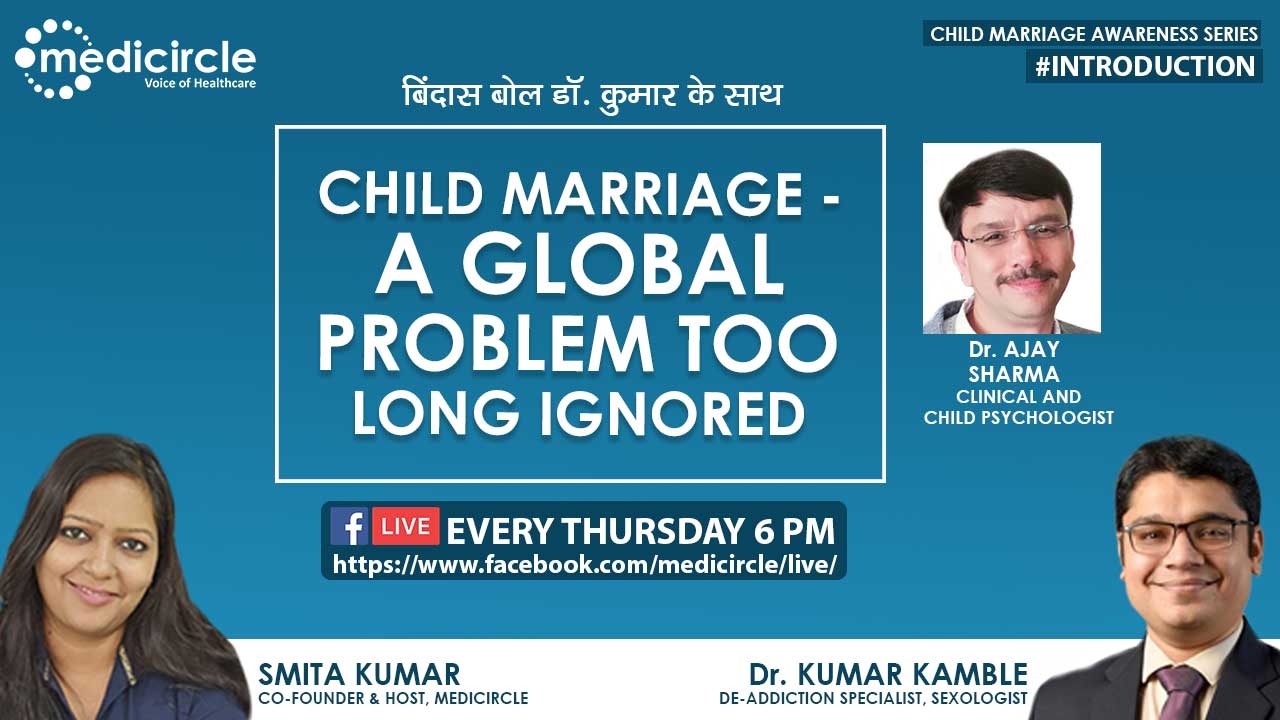 Dr Kumar Kamble and Dr. Ajay Sharma give professional insights on stopping child marriage for better future of next generation. They together explain an idea of the problems faced by many young girls and boys due to stress and emotional burden of child marriage for many. So, let' educate and bring about awareness through the message from experts

Child marriage is a violation of human rights. One in three of the world's child brides live in India.

Dr.Kumar Kamble is a professional sexologist and also a de-addiction specialist. Dr.Kamble has special expertise and experience in working with the King Edward Memorial Hospital in the Deaddiction center for 4 years.

Dr. Ajay Sharma is a Clinical and child psychologist working in Vishwas Psychotherapy, testing and counseling center practice in Indore city, He is catering to a wide spectrum of cases ranging from young kids, adolescents to elderly people, married couples, and corporates. He is an expert in various types of psychotherapies and techniques including Cognitive Behavior Therapy, Solution-Focused based short-term therapy, Group therapy, Family therapy, Marital therapy, Counseling for Suicidal Patients, Anger Management techniques, and Relaxation techniques.

Dr. Kumar Kamble says, “Child marriage means marriage in young age group. Children at a young age are growing and in the stage of development. Child marriage causes them to move into adulthood prematurely. Your mind and body are not ready to accept the child marriage responsibility. This impacts emotional and physical health. This drastic change can affect the mind and body affecting mental health growth causing

These symptoms are often unaddressed and if untreated can cause complications- Apart from this, this impacts the social life like lack of education, social growth gets hampered, lack of being independent, etc.

Dr. Ajay Sharma, “Child marriage affects the age group of 5 - 13 years during the developmental stage. This hampers the developmental stage before the age of 16 years leading to depression and anxiety and extra burden. Children like to play and study. This can cause a negative impact on family and lead to many problems with like-

Initially, WHO has initiated the age group for marriage from 18 to 21, and now they are thinking of further extending to the 25 years of age. This is due to the impact on brain development. Depression, anxiety, and hopelessness may result in alcohol use in children. Child marriage has increased during COVID as people are selling their girls for financial needs which is wrong especially in poor families. The problems start when the young girl is married to elderly men who are 10 - 15 years elder may lead to child abuse and lack of freedom.”

Problems for girl child due to child marriage

Dr. Kumar Kamble informs, “The main Problems for girl child due to child marriage are -

Dr. Ajay Sharma informs, “The marriage should take place after mutual consent of partners. The marriages post 25+ years of age stay healthy for the long term. At this age, you are aware of your responsibilities and your new role in the family. The marriages after the 25 + year age group are stable. The age group of 10 + to 16 + years of marriage has to deal with many problems like anger, identity search, stealing, child abuse, etc. When you marry after 25 years of age, you are physically and mentally more mature.

Awareness about such things is important as child marriage is still prevalent. The pressure on the girls is more as they have to leave their house and step into the groom's house. The young boys have financial burdens. This may lead to extramarital affairs at a young age and lack of sexual knowledge.”

Dr. Ajay Sharma informs, “Live for yourself and take a correct decision about marriage. Dream big till infinity.”

Dr. Kumar Kamble informs, “Awareness and education among the public about child marriage is a must.”