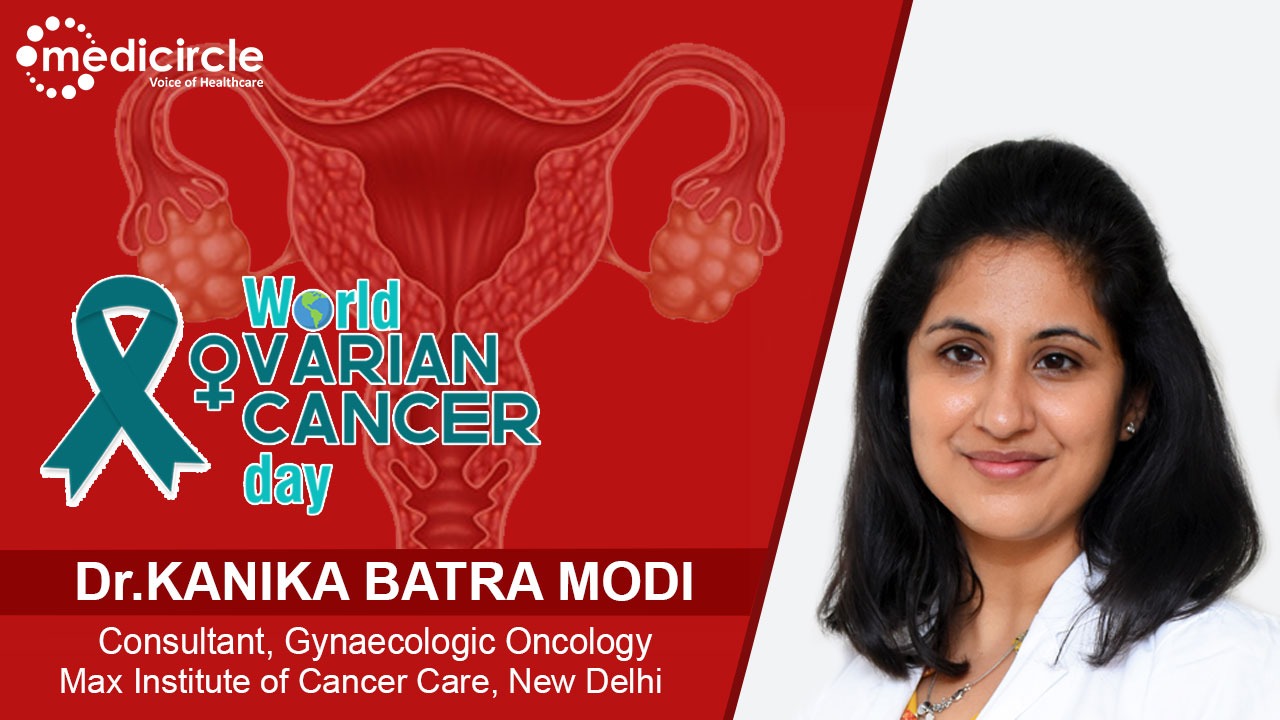 Some are preventable cancers. Some are screenable cancer. Ovarian cancer is unfortunately none of these. It’s a silent killer. In 60 -70 % of cases, it gets detected only when big masses have already got formed in the ovaries – Dr. Kanika Batra Modi

Although ovarian cancer may occur at any age, it is more common in older women, in the age group of 50 years and above. India has the world’s second-highest ovarian cancer incidence. Since the 1980s, there has been a growing drift of ovarian cancer in our country. Medicircle is conducting an exclusive series featuring eminent oncologists and specialists so that people can get direct and more reliable information from them.

Dr. Kanika Batra Modi is a Consultant, Gynaecologic Oncology in the Oncology Department at Max Saket, New Delhi. She deals with all varieties of gynae cancers. Her special areas of interest are ovarian masses / cancer surgery, endometrial cancer, cervical cancer, robotic and laparoscopic surgery, HIPEC – heated intraperitoneal chemotherapy, vulvar and vaginal cancer surgery. She has been invited as a speaker in various international and national conferences in gynae oncology and has published peer-reviewed papers as well. She is also actively involved with various community-level organisations for spreading awareness about various gynaecological cancers affecting women.

Ovarian cyst is harmless until it gets big

Dr. Kanika explains, “Cyst can be described as a balloon-like structure. If there is a cyst in the ovary, there is an outpouching. So basically, a cyst is a layer of cells or something lined by cells with fluid inside. It's typically harmless unless the size becomes too big.”

Risk from obesity is not that high

Dr. Kanika mentions, “Obesity as such does not have any relation with ovarian cancer. If there is obesity, there can be chances of polycystic ovarian disease which is the formation of multiple cysts. Polycystic ovarian disease is associated with low-grade tumors of the ovaries which are also called borderline tumors but they are not cancerous as such. Obesity is directly linked with endometrial cancer, not ovarian cancer."

Dr. Kanika emphasizes, “It is a debatable topic whether infertility drugs can trigger ovarian cancer. Research in this regard is ongoing. At this point, there is not much evidence proving any direct connection. There have been some studies that hint towards some connection with the stimulation of drugs but at this point, it is difficult to provide any definite picture of how many doses, etc. can lead to chances of ovarian cancer. Women should not at all think that if they are taking infertility treatment, they are prone to ovarian cancer. Fertility treatment has so far been considered safe.”

Dr. Kanika advises, “If there is a family history in which any blood relative has ovarian cancer or breast cancer, then specific genes can be tested to understand the risk of ovarian cancer. So, if there is a trend of ovarian cancer in the family, it is a wise idea to go to a doctor, understand the risk of carrying it and get a BRCA gene test done. If mutations are found, it means that the woman can be at risk. In such circumstances, it is advisable that when the family is complete, the ovaries of the woman are removed. This would be a risk-reducing surgery.”

Dr. Kanika further says, “Even if you keep on doing some blood tests or ultrasound, etc., ovarian cancer might not get detected. If a woman has taken hormonal contraceptives for 5 years, then the risk of ovarian cancer gets reduced by 50 %. It is recommended that talcum powder should never be used in the genital area or for that matter, any other chemical-based product should also be avoided as a preventive measure.

There are certain symptoms to watch for; like abdominal distension, weight loss, sudden loss of appetite, or excessive weight gain that require a doctor’s consultation. Though age is one of the factors of ovarian cancer there is no screening method through which we can detect it in women through tests as soon as they reach a particular age.”