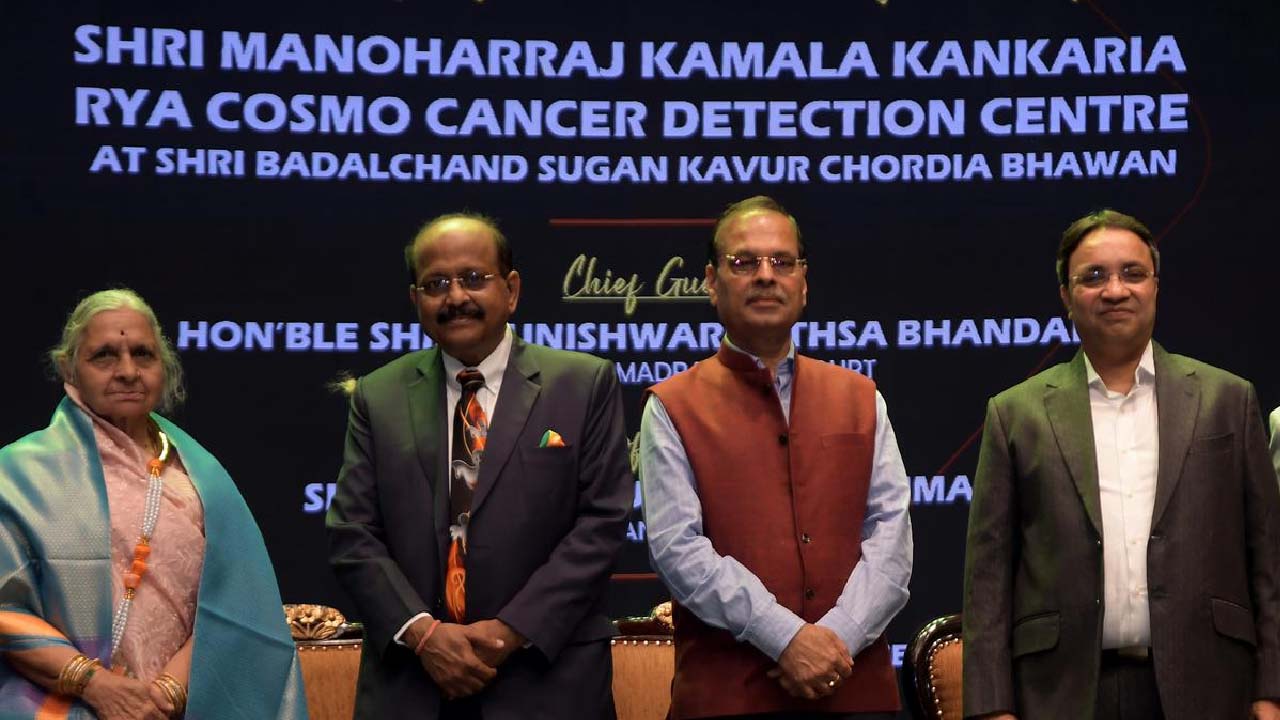 In order to detect cancer, a new multi-speciality outpatient day care centre has been inaugurated by Chief Justice of Madras High Court Munishwarnath Bhandari at Ayanavaram in Chennai.

The Chief Justice told the press that people have been influenced by western culture and junk food habits to the point where cancer has become a common disease, resulting in an increase in demand for dialysis and cancer care centres. To avoid these illnesses, it is necessary to maintain a healthy lifestyle. "For a healthy lifestyle, we should practice the habit of fasting and eating early in the evening as it aids digestion," he added. He expressed his surprise at the Foundation's initiatives and activities in caring for the uncared for. He urged the RYA Madras Cosmo Foundation to keep doing good deeds in order to make this society a better place."

At a press conference, "Ayanavaram and the surrounding areas have a large number of lower-middle-class families," said Narendra Srisrimal, Chairman-Cancer Detection Centre, RYA Madras Cosmo Foundation. We intended to build a cancer detection centre here because it would be beneficial to them. The patients will not be asked for any recommendations or proofs of documents." "RYA Madras Cosmo Foundation was established in 1995 by Ex-President of India His Excellency Dr.Venkatraman to provide affordable health care to marginalized sections of society under the theme "Care The Uncared," he said. The Foundation provides general prescriptions for Rs.30/- to marginalized sections of society. All patients' medicines are provided free of charge for the first three days of their prescribed medication period by the centre's pharmacy. Every month, the foundation holds Free Eye Camps where people can get their eyes screened and receive free cataract surgery and spectacles.

Shantideva Jawaharmal Chandan Day Care and Diagnostic Centre was established in 2012 and operates and manages a full-fledged Medical Day Care Centre, Dialysis Centre, Cost-to-Cost Pharmacy and Dispensary, according to Mr Rajesh Chandan, Managing Trustee of RYA Madras Cosmo Foundation. Approximately 4,30,000 patients have benefited from its decade-long operations, including 32,750 dialysis patients, 8,100 cataract operations, 90,000 X-Rays and scans, and 270+ Free Camps. Medway Hospitals in Kodambakkam manages and operates the blood bank, which was established in 2020.

"The newly launched Cancer Detection Centre is built over an area of 7000 sq. ft and has a panel of doctors specializing in early detection of cancer, as well as well equipped dental care and a 9 bedded dialysis centre," said Mr Umesh Agarwal, Project Secretary of RYA Madras Cosmo Foundation. The centre has a hall where free health camps are held on a regular basis. The dialysis centre will charge a subsidised fee of Rs.500/- for its services. The centre will offer low-cost dental and cancer detection services to the general public."