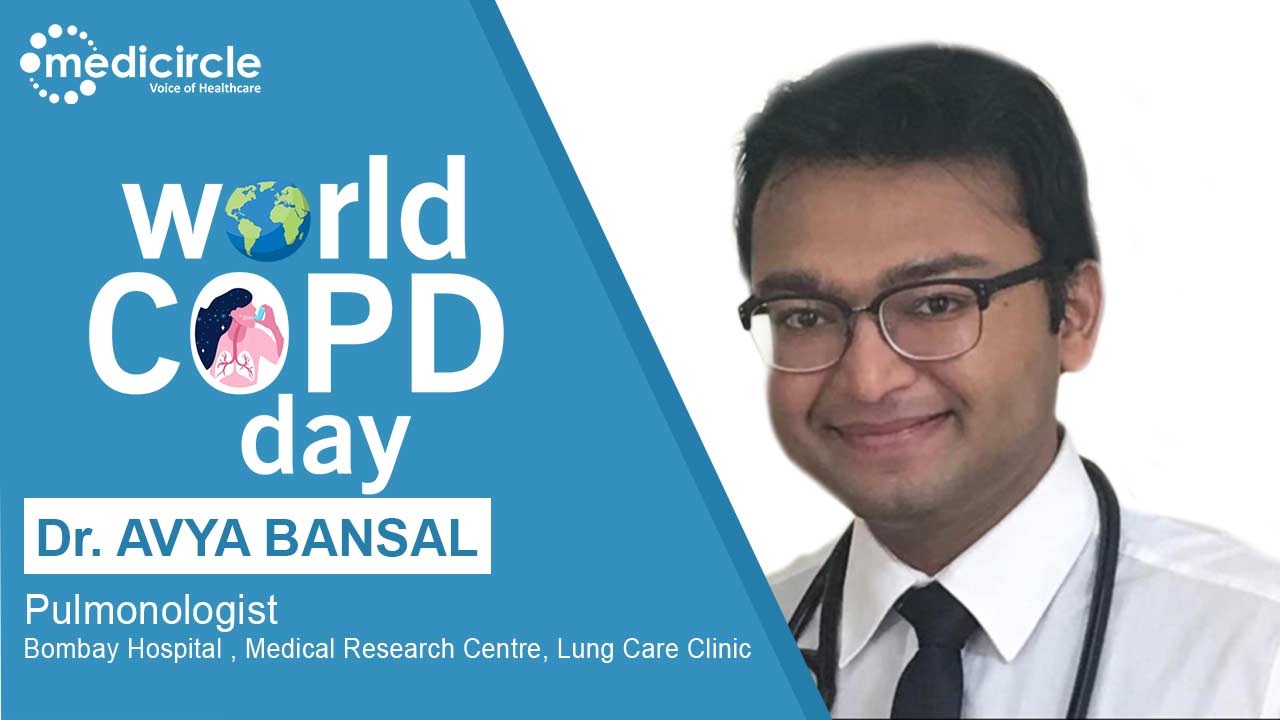 COPD was the second-highest cause of death in India after heart disease in 2017, killing 1 million. Know some important inputs on COPD from Dr. Avya Bansal

Chronic obstructive pulmonary disease (COPD) is a common lung disease. Having COPD makes it hard to breathe. Smoking is the main cause of COPD. The more a person smokes, the more likely that person will develop COPD. India is now the ‘COPD Capital of the World’.

Chronic Obstructive Pulmonary Disease (COPD) is the third leading cause of death worldwide, causing 3.23 million deaths in 2019. World COPD Day 2021 is observed on Wednesday 17 November. India contributes a significant and growing percentage of COPD mortality which is estimated to be amongst the highest in the world. Estimates suggest there are 30 million COPD patients in India. COPD was the second-highest cause of death in India after heart disease in 2017, killing 1 million. COPD led to 13% of all deaths in India, and 7.5 million were at risk of the disease in 2016. We at Medicircle are conducting the World COPD Day Awareness Series to raise awareness, share knowledge, and discuss ways to reduce the burden of COPD worldwide.

He is a member of Maharashtra medical council, Indian Chest Society, American College of Chest Physicians, European Respiratory Society (ERS), Chest Council of India, Indian Association of Bronchology, Asian Pacific Society of Respirology, and National College of Chest Physicians. He has secured 1st place in Pulmonology Quiz at State Pulmonology Conference - PULMOKARN 2016. He is the youngest recipient of the Fellowship of the Asian Pacific Society of Respirology.

Dr. Avya says, "COPD is a lung disease. Chronic obstructive pulmonary disease (COPD) affects the lungs. It has two subtypes – One is emphysema predominant and another one is chronic bronchitis predominant. Cough and mucus are more commonly seen in chronic bronchitis, it usually occurs in old ages after 50-60 years. Emphysema is commonly seen in a patient who is exposed to tobacco smoke, chemical fumes, or dust from the environment or workplace.

Dr. Avya mentions, “Earlier COPD was seen only in men but due to exposure of biomass, chulha, and tobacco, it is becoming more common in women as well.  Some common symptoms of COPD are

Tightness in your chest

Frequent coughing or a cough that produces a lot of mucus

Use of accessory muscles to breathe

Dr. Avya explains, “Rarely less than 1%, a genetic condition called alpha-1 antitrypsin deficiency or mutation can play a role in causing COPD. Rest 99% disease is because of exposure.

Exposure to smoking, paan, tobacco, environmental pollution, working industries like vehicle, shipping, and mining industries.  The chances of COPD increase in long-standing asthma patients.  HIV itself is also the risk factor for COPD.  Other lung diseases can also increase the risk of COPD.

COPD reduced lung function by damaging the airways and air sacs in the lungs. When a person with healthy lungs inhales air, it travels down their windpipe and into the airways of the lungs, known as bronchial tubes. Inside the lungs, the bronchial tubes branch into thousands of smaller, thinner channels called bronchioles. At the end of these tubes are bunches of tiny round air sacs called alveoli. Capillaries are small blood vessels that surround the walls of the air sacs. Once air makes its way to the air sacs, oxygen passes through the walls of the air sac into the capillaries that transport blood.

At the same time, carbon dioxide moves from the capillaries into the air sacs. These events happen at the same time, and scientists refer to this as gas exchange. Healthy air sacs are elastic and very stretchy. People with COPD have less air flowing in and out of the airways.

Other complications in COPD

The deficiency of calcium and vitamin D causes bone weakness.

Heart diseases because of smoking

Less exposure to tobacco smoking and chulha. The right type of Inhalers. In treatment, 50% is medication (Inhalers) and the other 50% is diet and exercise. A respiratory diet is very important for COPD patients. These patients should take fewer carbs and more protein. Physiotherapy, breathing exercises, walking. Timely swine flu and pneumonia vaccines should be given to COPD patients to decrease the intensity of the disease. Pulmonary rehabilitation is very significant for COPD patients.

Food to eat and to avoid